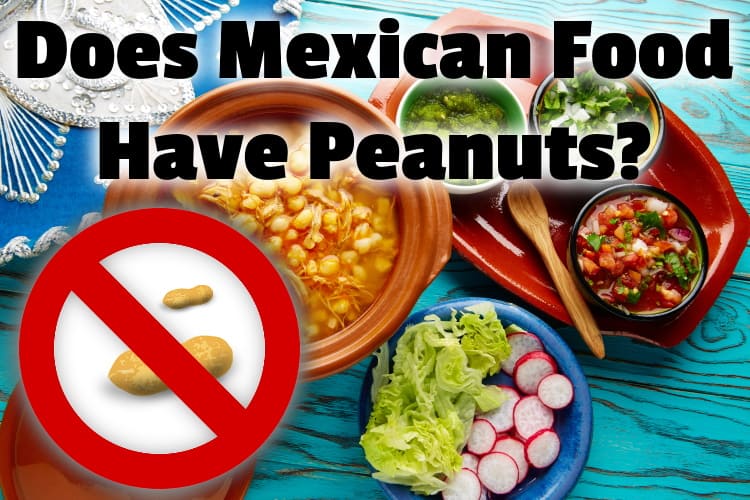 It can be frustrating to find food to eat if you or a family or friend has a peanut allergy. Peanuts are surprisingly everywhere and can be hard to avoid. But what about Mexican cuisine? Does Mexican food have Peanuts?

Here’s what I know from eating and making a lot of it:

Does Mexican food have Peanuts? Generally speaking, no. Most Mexican food doesn’t contain peanuts, except a few things like mole sauce. However, you must still be careful as some restaurants might use peanut oil while cooking. While cooking mole sauce at home, peanuts can be replaced by seeds, spices, or other nuts.

We have a lot to learn when it comes to Mexican food, peanut allergies, and keeping you and your family safe.

So we will talk about a few dishes that you must avoid or have specially made at a restaurant. But we’ll also look at some good substitutions for home cooking.

We’ll even talk about peanuts in more than just Mexican food. Let’s dive right on into it!

Sorry that should be 1750 as a very conservative figure .06% of worlds population have a nut allergy and 50 per million of those die as a result of that allergy. Based on a world population of 7 billion. Nuts are killing more people than Covid- 19 #covid #peanuts #disease pic.twitter.com/H70oaufzw1

Are there nuts in Mexican food?

Generally speaking, they are not often used.

The most basic recipe that comes to my mind while talking about peanuts in Mexican food was peanut sauce. I quickly realized that it was Asian cuisine, not Mexican. However, a lot of people can get these two food types mixed up.

They have very similar ingredients but different preparation styles.

I have a recent article that is similar to this one, but it talks about peanuts in Asian food. If you’re interested, just click the link to read about it on my site.

Now let’s focus back on Mexican food. Even though peanut sauce isn’t Mexican, there are similar dishes that you must be cautious of, such as mole sauce.

Mexican Pesto, Mole Sauce, Mazapan, Picadillo, Champurroados, Chile Rellenos, and many desserts are often made with nuts and should be avoided when you’re eating Mexican food.

However, some dishes that don’t have peanuts include tacos, enchiladas (Be careful with this at restaurants, I’ll go more into this later), and quesadillas. Generally speaking, you should be able to tell the chef that you have a peanut allergy, and you can avoid any sticky situations.

Visit the website to learn more about peanut allergy.

Remember to be careful at mom and pop shops or food trucks as they tend to lean more towards traditional food which contains more nuts.

Are there peanuts in mole sauce?

You may assume it to be guacamole if you’re not familiar with Mexican food, but a mole sauce is something different. It is a marinade & sauce that’s usually very thick and can have varying ingredients depending on the sauce.

However, mole has these main ingredients.

This dish traditionally is made with nuts like peanuts, almonds, or peanut butter, so you’ll miss out on it at restaurants and maybe parties. If you make it at home, though, I’ll talk later about what you can substitute the nuts out to make the mole yourself.

If you’re eating in Mexico, mole sauce is pretty much always made with nuts and should be avoided.

The best alternative is to make your Mexican food yourself and be careful when eating out. There is still an alternative to preparing food without peanuts, even mole sauce.

Mole sauce is often poured on top of enchiladas or cooked with chicken breast. So while it won’t taste the same, any red or green salsa or enchilada sauce will work just fine as a substitute.

My wife is making mole sauce, I am so lucky pic.twitter.com/oucTXPNuqG

Is Enchilada sauce made with peanut butter or peanuts?

I mentioned enchiladas earlier, and now I am going to brief you about it a little more.

Now, usually, enchilada’s don’t have peanuts in them. However, some places do use peanut oil in the sauce for their enchiladas. Or to fry the tortillas before rolling them.

Some restaurants even put peanut butter in their sauce to thicken it.

So overall, yes, enchilada can be made with peanut oil or peanut butter. Do not forget that when oil is refined, then it has little to no protein.

It means that you’re less likely to have a reaction to it than the unrefined peanut oil.

It also depends on how badly you react to your allergies. Some people can handle peanut oil while others can’t. Some enchiladas are even made with Pipian. Pipian is a type of mole sauce that is made from pumpkin seeds or squash seeds instead of peanuts or almonds.

Make enchiladas at home is a fun experience, though, and is always safe for a family with allergies. A quick and easy recipe for enchiladas that don’t have peanuts is this.

As you may have guessed, it depends on who makes and where it’s made. Some restaurants use peanut oil for cooking their food while some dishes naturally call for peanut oil.

As I told before, it varies with the person whether or not they can handle peanut oil. It also depends on the type of peanut oil is used. Refined peanut oil has almost no protein in it and is generally safe for the average person with a peanut allergy.

Never put yourself at risk, though, and ask if the food is cooked in peanut oil when going out to eat.

Most restaurants are accommodating to food allergies. Most Mexican food that I know of doesn’t use peanut oil as much as they do the actual nut, such as mole sauce.

Enchiladas are the main dish at restaurants that use peanut oil or peanut butter in the sauce.

To play it safe, save the enchiladas for a fun family meal at home and grab a quesadilla while you’re out instead.

What can I substitute for peanuts in mole sauce?

Substitution in meals is a great way to make a meal safe for everyone.

Whether you’re on a keto diet, high protein diet, have food allergies, or even if you’re vegan, substituting the problem in the meal doesn’t mean the meal has to be plain or very different in fact.

In this case, we’re looking at substituting peanuts in a mole sauce.

How do I make mole sauce without peanuts? It is rather easy. The peanuts used in mole sauce is meant to be a thickener. But it also helps balance out the sweetness of any fruits or chocolate used.

I have an excellent recipe for mole sauce that doesn’t contain peanuts. I also have a recent article on what you can eat at a Mexican restaurant while on a keto diet. Click the link to read it on my site.

Even though peanuts usually are an exception for people who are on a keto diet, it is something that most will avoid. Trying keto might help avoid peanuts both at home and on the go. Indeed, there are a ton of benefits by switching to a keto diet, and you don’t have to give up the yummy food you love.

Let’s get back to that recipe.

I’ve shown you the main ingredients for mole sauce, so let’s make it peanut-free. Instead of adding peanuts, let’s use pumpkin seeds and raisins.

Ingredients for pepper paste (to be added in the mole sauce)

Did I cover everything you want to know about peanuts in Mexican food?

In this article, we went over peanuts in Mexican food.

We also talked about how to replace those peanuts with other food. We covered what dishes to avoid and what dishes you should make at home as a family cook night.

Overall Mexican food does occasionally have peanuts in it, but a lot of it doesn’t. There are also easy substitutions for recipes that call for peanuts, peanut oil, or peanut butter.

Many dishes don’t include peanuts or peanut oil, but you should still be safe and always make sure to ask if you eat out. All peanut allergies are different, and some people may be able to handle peanut oil while others can not.

Mexican food is a favorite among a lot of people, and there are always ways to make the food safe for everyone. Whether you are on keto, have allergies, or genuinely don’t like a particular food type.