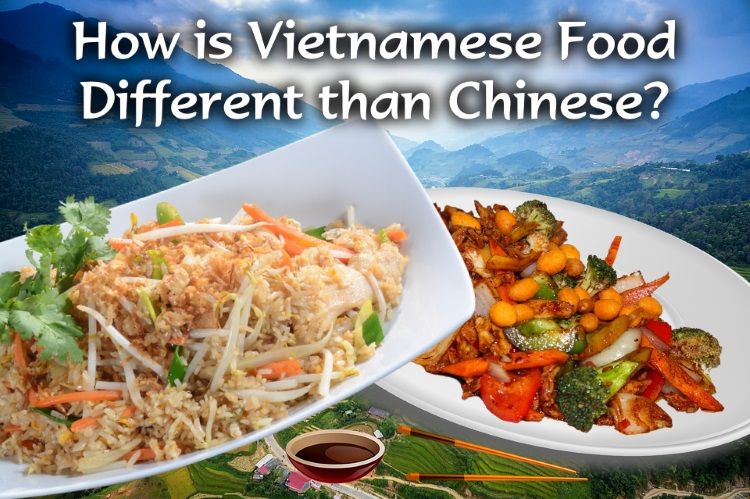 I pretty much love all types of Asian food, and while I know a great deal about each type, I have wondered specifically how is Vietnamese food different than Chinese?

Here’s what I’ve learned through some tasty exploration:

But there’s a great deal more to know about these wonderful cuisines; not only how they differ, but which is healthier. It’s also really interesting to note how both cuisines compare to Thai food.

No noods today. But what we have here is delicious Nem nướng (grilled pork sausage). Wrap inside rice paper with greens, vermicelli, and dip into a thick fish sauce. #vietnamesefood pic.twitter.com/XE2OraPNN2

Is Vietnamese food similar to Chinese?

Vietnamese food is not overly similar to Chinese food other than that both utilize rice, noodles, sweet & salty sauces, and the heavy use of garlic & ginger. But both cuisines often use the technique of stir-frying to cook foods.

But overall, Chinese food is much heavier, fattier, and more apt to be fried than Vietnamese food.

But the short answer is that ALL types of Asian food (Thai, Korean, Chinese, Japanese, and Vietnamese being the biggies) share certain commonalities in ingredients and flavors, such as:

What is Vietnamese food known for?

Vietnamese food is known for fresh, not fried spring rolls, rice noodles, and fresh herbs such as mint, cilantro, and basil. But the French influence in their cuisine also makes them known for a baguette sandwich known as Bánh mì which can be served with a variety of proteins.

The big differences between Vietnamese and Chinese food come into play when you consider the French occupation of Vietnam.

The introduction of French culture, including French cuisine, changed the face of Vietnamese food forever and creates the most striking differences between the two.

At that time, Catholic missionaries from France went to Vietnam. Eventually, the French colonized both Vietnam and Cambodia in 1887.

France didn’t leave Vietnam until 1954 following the Geneva Accord, but they left a lasting impression on Vietnamese cuisine and are responsible for the introduction of the following in Vietnamese cooking:

Central Asian architecture has made lasting impact on architecture in India, Pakistan, Bangladesh. It is visible across South Asia. pic.twitter.com/HuyZbaRwOy

Indian food is considered Asian food since India is part of Asia. However, Indian food does differ heavily from more traditional Asian cuisines with the use of cream, cheese, tomatoes, and rarely using noodles as a base.

Indian food also uses ghee (clarified butter) for most of the sautéing, compared to peanut and sesame oil which dominates most other Asian cuisines.

Indian food, however, is known for curry, which also has a place in Thai food especially, but in other Asian cuisines too.

One key difference between Indian food and other Asian food is how often the food processor gets used in Indian kitchens.  There are actually a ton of different things Indian chefs use their food processors for, from naan bread dough to fresh chutneys.

I wrote a recent article that breaks down the 11 ways a food processor helps in preparing Indian food, so if you’re curious and especially if want to see how surprisingly easy it is to make homemade naan bread, take a look.

How spicy is Vietnamese food compared to Chinese food?

But honestly, I don’t find either Vietnamese or Chinese food to be very spicy. Thai food is much hotter than both of those.

What is notable about Vietnamese foods is that in Northern Vietnamese there’s a cultural preference for saltier flavors. In the south, by contrast, they tend to prefer sweeter flavors.

Northern Vietnamese foods are much more heavily influenced by Chinese cuisine and don’t use a lot of sugar or sweet sauces.

In the south of Vietnam, the food is more influenced by the tastes of The Khmer Empire, also called the Angkor Empire which is now modern-day Cambodia. These culinary influences brought fresh herbs, leaves, an abundance of dipping sauces, and pickled vegetables.

In China, again, much of the food is not especially spicy.

Szechwan cuisine (Sichuan, Szechuan), from the Sichuan Province, tends to have some of the spiciest dishes, blending a lot of garlic, chili peppers, and Sichuan peppercorns.

But again, neither cuisine is especially spicy, especially compared to nearby Thailand.

While either cuisine has elements of fried foods or overly sweet sauces, Vietnamese food tends to be lighter in texture, with fewer fried foods, fresher vegetables, fresh herbs and sprouts, and lighter sauces.

Chinese food, by comparison, can have dangerously high levels of sodium, according to the American Heart Association.

Why is it so salty? One tablespoon of soy sauce has a whopping 1,005 milligrams of sodium!

Going back to the American Heart Association, they recommend 1,500 milligrams of sodium a day. So if 1 tablespoon of soy sauce has 1,005, you can see how you could blow your daily allowance easily and many times over with just 1 Chinese food meal.

Another deadly ingredient often used in Chinese food but typically absent in Vietnamese (and Thai) food is MSG (monosodium glutamate).

MSG is an artificial flavor enhancer that is similar to the naturally occurring chemical glutamate. Unfortunately, many people react and, according to the Mayo Clinic, can have side effects from MSG including:

CNN selected Vietnamese food as one of the 10 healthiest ethnic cuisines, along with Japan, Thailand, and India. Chinese food, however, did not make the cut.

They noted the following qualities as part of their study:

Do the Vietnamese use chopsticks?

The Vietnamese do use chopsticks, particularly for noodle dishes. Spoons are also utilized, as well as forks and knives on occasion. Chopsticks are not common in all Asian countries but are commonplace in China, Japan, and Korea in addition to Vietnam.

In the US, of course, where we Americans are easily confused about stuff like that, it’s not uncommon to see chopsticks in Thai or Cambodian restaurants, but chances are they have those mostly for their American patrons.

Because of all the different influences in Vietnam, though, it’s not uncommon to see a blend of eating utensils.

At a typical Vietnamese restaurant, you might see both chopsticks, and a fork and knife. But that might also be in addition to Chinese soup spoons or regular soup spoons.

How do Chinese and Vietnamese food differ from Thai food?

Chinese food is not similar to Thai or Vietnamese food due to the heavy use of soy sauce and fried foods. Thai & Vietnamese food is more similar as both use fish sauce, rice noodles, and fresh herbs. However, Thai food tends to be spicier and uses curries with a coconut milk base which is not used in China or Vietnam.

Like Vietnamese food, Thai food often has rice noodles as a base, although rice is common too as it in with Chinese food.

If you look at the region as a whole it might make more sense. China (and Japan and Korea) are located in the east. Vietnam and Thailand, by comparison, are both in the southeast.

The most striking difference, however, is in Thai curries.

Thai curry uses a curry paste blended into a base of coconut milk to create a rich, spicy sauce. They have a number of different curry pastes including:

Each curry paste is different, but essentially a blend of chilies and garlic with the possible addition of lemongrass (also prominent in Vietnamese food) and shrimp paste.

Ginger is more common in China and Japan, whereas both Vietnam and Thailand prefer fresh herbs such as lemongrass, kaffir lime leaves, mint, cilantro, basil, and galangal (a root similar to ginger).

In some ways though, because all Asian countries have different regions and (in some cases) drastically different cuisines in those regions, it’s actually hard to generalize and compare.

So do what I recommend, and try ’em all!

If you are as confused as I used to be about the differences between Thai and Indian curry, definitely check out this article I wrote which breaks down the key differences.

What really surprised me was how the leaves of the curry plant get used in Indian food. Just click that link to read it on my site.

Did I cover all you wanted to know about how Vietnamese food is different than Chinese?

In this article, we took a look into the world of Asian cuisines.

We explored ingredients, cultural similarities, and differences between the countries, and examined things like spiciness, and even which Asian countries use chopsticks (hint: it’s not all of them).

I always hand select items that I either own, have used, or have researched well to ensure they are great items. I also give not only top of the line as well as inexpensive alternatives so my choices work for any budget.

Smoked chicken breast is one of the most delicious tastes out there. Whether you're using bone-in or boneless chicken breast, smoking it can add a unique flavor and texture that you can't get any...

While there are many ways to keep food fresh and flavorful, smoking meat and chicken is undoubtedly a great method. This cooking method adds a fantastic smokey flavor to the meat, but does it extend...