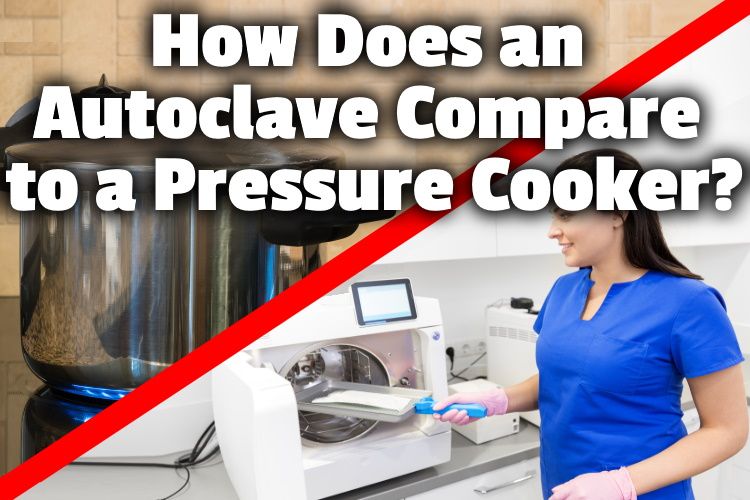 I decided to look more into it, and discovered:

An autoclave is a pressure device used for sterilizing medical equipment and uses dry steam. It is not used to cook food. Pressure cookers are used to cook food and use wet steam. However, you can sterilize or can food with either one. But autoclaves use more pressure resulting in an increased boiling point.

The best way to sterilize both the container and the food itself is through steam sterilization.

This is best accomplished in a machine that uses both heat and pressure to create the most steam and sterilize quickly and effectively.

Is a pressure cooker better than an autoclave when it comes to sterilization? When you are canning at home, these questions are extremely important.

So, let’s look at this topic in detail.

What is an autoclave & how does it compare to a pressure cooker?

An autoclave is a pressure device that uses strong heat and high pressure to sterilize. Unlike a pressure cooker, it is not used for cooking. Typically, these machines are used in the medical field to sterilize surgical equipment, dental instruments, and laboratory equipment.

However, we are obviously not talking about autoclaves about medical equipment here.

Autoclaves may also be used in the food industry to help preserve shelf life and sterilize containers that will be used for storing food for longer periods of time.

There are actually many different types of autoclaves, varying in size, shape, and function. They can sterilize just about anything: solids, liquids, hollow items, and instruments in a variety of shapes and sizes.

Pressure cookers and autoclaves are very similar in function. They both use the power of heat and pressure to create steam. This can help kill bacteria, spores, and germs that are otherwise resistant to boiling water and detergents.

The biggest difference with an autoclave is that it is used solely for sterilization whereas pressure cookers are used for – well – cooking. The extra pressure in an autoclave increases water’s boiling point, so it holds more heat which kills microbes more effectively (source).

People often ask me how we can be sure our starter cultures remain stable and uncontaminated. The first step is to sterilize (pasteurize) your feed flour. I have an autoclave in my kitchen but if you’re not an überdork you can use a pressure cooker. pic.twitter.com/OopuOmEYag

Can a pressure cooker be used as an autoclave?

But it may help to review all the features of both to see how they differ and how they compare.

Here is a quick comparison of the two machines at a glance.

We already covered a bit of what an autoclave does. It uses steam and pressure for the sole purpose of sterilization. Often used in the medical and dental fields, it is the most common means of sterilizing instruments and lab equipment.

Pressure cookers, on the other hand, are primarily designed to cook. They use a lot of pressure to keep ingredients under constant pressure and cook them with wet heat using water or other liquids placed in the container with the ingredients.

That being said, you don’t want to use an autoclave as a pressure cooker because you won’t get the right amount of moisture in your food.

However, you can use a pressure cooker as an autoclave to a certain degree.

It is not recommended to use a pressure cooker to sterilize medical instruments, but you can use it in your kitchen if you need to sterilize household items.

What cannot be sterilized in an autoclave?

Autoclaves should not be used to sterilize items that may contain or be covered in any type of solvents such as paint, paint remover, or other harsh chemicals. Items containing chemicals that are corrosive or known carcinogens should also be avoided.

As we briefly mentioned earlier, autoclaves can be used to sterilize a variety of materials.

These include solids, liquids, hollow items, and instruments in a variety of shapes and sizes. However, some things cannot be placed in an autoclave.

Here you will find a comprehensive list of compatible and incompatible materials put together by the University of Iowa Environmental Health and Safety department.

Now, of course, most of these you will not need to know when working in your kitchen. However, when it comes to glass and plastics, you do need to be aware of what is okay to put in an autoclave for sterilization.

You will also need to keep this list in mind when using your pressure cooker to sterilize, especially when it comes to the type of glass you are using for canning.

Pyrex is made with borosilicate glass, which is definitely safe to use. Mason jars used for canning are made with heat-tempered glass, able to withstand the heat and pressure of canning.

Have a new baby? Use your pressure cooker to easily sterilize baby bottles: https://t.co/6vb0tGy4LE pic.twitter.com/l0YnOv24E5

How do you sterilize in a pressure cooker?

Older Instant Pots may not be able to reach that PSI, but newer models or models with a “high” option will.

While some say that it is not absolutely necessary, it is a good idea to sterilize your glass canning jars when preserving fruits and vegetables. This helps to kill off potential bacteria and promote longer shelf life. And this can be done – you guessed it – with your pressure cooker.

You could simply boil your jars, but as we have already seen, steam sterilization with a pressure cooker or autoclave is a much more effective way to sterilize.

Here’s the detail on what I said above.

Always be careful with what you place in your pressure cooker, and allow everything to cool completely before touching it with your bare hands.

How much pressure is in an autoclave?

Most autoclave machines sterilize with steam under pressure of about 15 pounds per square inch (psi), reaching a temperature of about 250 degrees Fahrenheit.

Safety should be first and foremost on your mind when you are dealing with anything under pressure.

In comparison, a stovetop pressure cooker can range from 12 to 21.7 psi. The Instant Pot, on the other hand, has a working pressure in the range of 10.15 to 11.6 psi. However, it may reach 15.23 psi momentarily due to the heat conduction delay.

With so much pressure in these machines, it can make some nervous, wondering if there is a threat of explosion under pressure.

However, there really isn’t any need to worry about pieces of your Instant Pot flying around your kitchen. If you want to ease your fears, read this recent article. Click that link to read about Instant Pot safety tips, including how to know if it’s time to replace the silicone ring.

You should still take necessary precautions when sterilizing in your pressure cooker, though.

You want to avoid injury and any unnecessary breakage of glass and other materials. Don’t place any glass containers directly on the bottom of the pressure cooker. This will place too much direct heat on the container and may cause them to shatter.

You also want to make sure there isn’t too much pressure buildup within the container itself. Don’t overfill your jars when canning and keep the lids loosened to reduce pressure buildup and allow steam penetration.

Before you use your pressure cooker to sterilize, you want to ensure everything is in proper working order. There are several safety features in place on most pressure cookers and Instant Pot products.

I dive a lot deeper into these safety features in a recent article in more detail, including how to avoid the 1 thing that could cause a pressure cooker to explode.

Overall, there is nothing to worry about when using your pressure cooker.

Hearing any unusual noises with your pressure cooker?

It could be nothing, as pressure cookers do make noise. However, it could also be a sign of something wrong. Luckily, I break down both for you in this recent article,

Did I cover all you wanted to know about the differences between an autoclave and a pressure cooker?

We covered quite a bit here.

First, we talked about what an autoclave is and how it uses steam to sterilize instruments of various materials. Then we looked at how pressure cookers are very similar in their function and how you can use them to sterilize canning jars and other things in your kitchen. And finally, we covered how to use these machines safely in your home.

Hopefully, this answers all of your questions about how an autoclave compares to a pressure cooker.

I love my Instant-Pot, which is the best-known brand of pressure cooker. But with all the sputtering, clicking, and steam that comes out of it when I'm using it, I've wondered are pressure cookers...