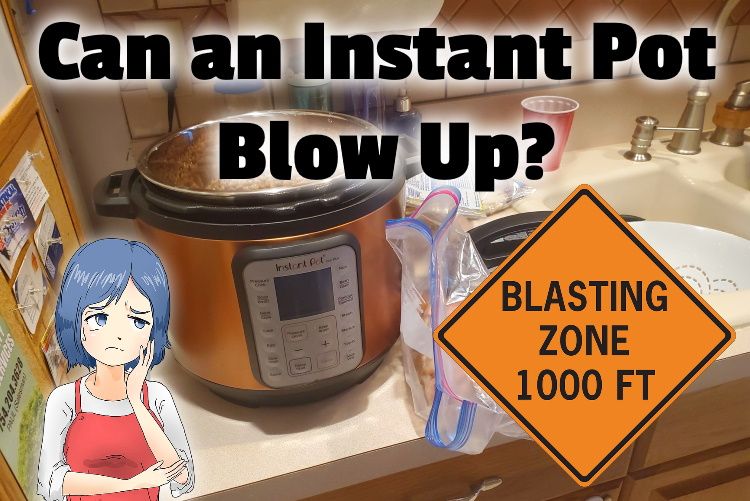 Instant Pots seem to be everywhere lately. Even people who had no idea what a pressure cooker was before, now sing their praises.  But for those who haven’t tried one, a common question is can an Instant Pot blow up?

I decided to do some research and investigate. Here’s what I learned:

Instant Pots do not blow up or explode. They have several built-in safety features that are specifically designed to guarantee safe operation. They will automatically stop working or reduce the internal pressure if the sensors indicate a problem. Any issues that have happened are likely the result of misuse.

On my recommended products page, I take the legwork out of it for you and only list the best of the best that appear on Amazon.

I only show products that are 4 or 5 stars with no more than 10% of the reviews being bad ones. I also only like to list items I own myself or have at least used. That way, you know these are quality products.

So if you need any kitchen gadget, make sure to check out my pages, neatly organized by category.

CLICK HERE to see my recommended products page and bookmark for when you need it!

Admittedly hid with the dog behind a wall because I was afraid it would explode during the Instant Release, but anyway, here is my latest Instant Pot creation (we both survived). pic.twitter.com/zZK2s7tRX4

Are Instant Pots safe and can they explode?

If you do a Google search for “Can Instant Pot Explode,” you’ll get a list of lawyers that specialize in burn injuries and explosions.

Instant Pots build high heat quickly. I would not be surprised to find lots of people that have been burned by them, and on occasion, have one explode on them. Typically those types of injuries are due to user error rather than a defective product.

That doesn’t mean it doesn’t happen. It just means that if you follow the manufacturer’s instructions, you should be safe.

Instant Pots are incredibly safe. They have a myriad of safety features built in to ensure that they remain safe and don’t explode. I’ve used mine many times without issue.

A few of the safety features are listed below.

Your Instant Pot knows if you don’t have the lid on correctly. If you haven’t, it won’t allow pressurization to start. In some models, only the keep-warm and saute features will work if the lid is off or not on correctly.

The Instant Pot won’t allow you to open the lid if you forgot to release the pressure first with the steam release valve. This is specifically to prevent explosions or the lid from flying off, potentially causing injury.

Instant Pot has a patented pressure sensor mechanism. This automatically keeps the pressure at a safe level between 10.12psi and 11.6 psi (pounds per square inch).

If the pressure in your Instant Pot goes over 15.23 psi, the steam release will be automatically opened to allow some steam to be released to ensure the pressure inside your pot never gets too high.

As an added safety feature just in case the pressure regulator isn’t working right, and the pressure is getting too high, your Instant Pot will automatically drop the inner pot just enough so that steam will be released around the rim of the lid.

These are just a few of the safety features that are directly related to the amount of pressure that is allowed to build up in the machine.

There are, however, certain dangers from overfilling your Instant Pot.

To see a full list of safety features, as well as what happens when you overfill your Instant Pot, read this recent article.

Admittedly hid with the dog behind a wall because I was afraid it would explode during the Instant Release, but anyway, here is my latest Instant Pot creation (we both survived). pic.twitter.com/zZK2s7tRX4

How many instant pots have exploded?

I can’t answer this with an exact number. However, I can say that it has happened before.

In March of 2018, a woman claimed that her Instant Pot exploded after she put a kitchen towel over the release valve as it was venting.

As a result, she claimed that the soup was cooking shot several feet from the cooker, burning her neck and arm.  source

Also, in March of 2018, more than 100,000 Instant Pot 8-in-1 multicookers were recalled as they posed a fire hazard. A manufacturer defect was causing the multicooker to overheat and melt the bottom. source

However, while that recall was for an Instant Pot branded product, that was actually NOT a pressure cooker.

So, can they explode? Possibly. Nothing is perfect, including manufacturers and users.

That said, there are millions of Instant Pots in people’s homes. If they posed a significant risk of exploding, consumers would be aware of the issue. They wouldn’t even have to Google it because it would be all over the news.

Using the Instant Pot for the first time to make beer braised pulled pork. Will I explode? I 👏 am 👏scared👏 pic.twitter.com/BgibTR2cBw

What does Snopes say about Instant Pot explosions?

I did find an article about the Multicooker melting down that I mentioned above, but I didn’t find even one article that mentioned exploding Instant Pots.

So again, while it’s possible one has actually exploded due to a manufacturer’s defect, there is really no evidence of it. At least not that I could find.

Bad things happen if you overfill your instant pot ever so slightly.

You don’t want to know how I know. pic.twitter.com/oZ21CAjl1C

How do I keep my instant pot from exploding?

The best strategy is to just follow the manual that comes with your Instant Pot and don’t do anything it tells you not to do. Also, seek out recipes with 4 or 5 stars and lots of reviews. That tells you that lots of other people have followed that recipe with excellent (and safe) results.

However, here are a few of the things you want to make sure you do (or don’t do):

Your Instant Pot has a line on the inside showing you the max you can fill it. Don’t go over that line. Food needs room to expand when you cook it.

When the Instant Pot is done (or you have turned it off) just quickly tap the steam release valve to one side or the other. Steam will quickly escape from the valve straight up. So keep your face away from the top of the lid and move your hand quickly out of the way.

The lid and the contents inside are under pressure while the Instant Pot is cooking.

If you try and open the lid before you have released the pressure, that pressure will come out quickly and dangerously, like when you accidentally pop a balloon.

Never try and pry, force, or otherwise open the lid until the Instant Pot is done and you have released the pressure with the steam valve.

Your Instant Pot can do a lot of things, including sauté but never fill it with oil and attempt to deep fry.

Steam is created when the liquid reaches a high temperature. Steam expands.

So don’t put more than 1 to 1 ½ cups of liquid in your Instant Pot, in addition to your food.

The silicone ring is a gasket that helps completely seal in the pressure. It is your first line of defense against explosions or other mishaps.

If you follow these basic safety tips, you’ll be a master of the Instant Pot, it will last for years, AND it will never pose a danger to you or explode.

hands down the best part of using an instant pot is that feeling of cheating death each and every time it doesn’t explode on you pic.twitter.com/p18LK85BGI

Is it safe to leave the Instant Pot unattended?

That being said, you don’t need to be in the kitchen with it the entire time. Just monitor it a few times and ensure no steam is leaking anywhere out the sides.

If you do absolutely have to leave the house leaving the pressure cooker unattended, make sure it has reached its full pressure and again, ensure that absolutely no steam is being released anywhere.

This is, unfortunately, one of the disadvantages of cooking with an Instant Pot. However, it does cut cooking time by ⅔, there is less mess, and less loss of nutrients.

But there’s a lot more to know about the advantages and disadvantages of pressure cooking in general.

To read more about the advantages and disadvantages of pressure cooking, read this recent article.

Did I answer all of your questions about whether Instant Pots can blow up?

In this article, we covered whether Instant Pots will blow up or explode.

We went over a few of the safety features as well as how to prevent an explosion. While we talked about 1 case where an Instant Pot supposedly exploded, we also did a little snooping in Snopes to see if they had anything to add. (They don’t!)

As long as you follow the instructions, and use good judgment if something seems off about your Instant Pot, it is unlikely that it will explode.

Are you on the fence about purchasing an Instant Pot?

If you are, read this recent article where I talk about the benefits of owning one and how much they actually cost. I even include a handy chart that shows all the top models, features, and price, making it easy to decide which one is right for you.

What is your favorite thing to cook in your InstantPot?

Photos which require attribution:
April 2, 2020 by osseous is licensed under CC2.0