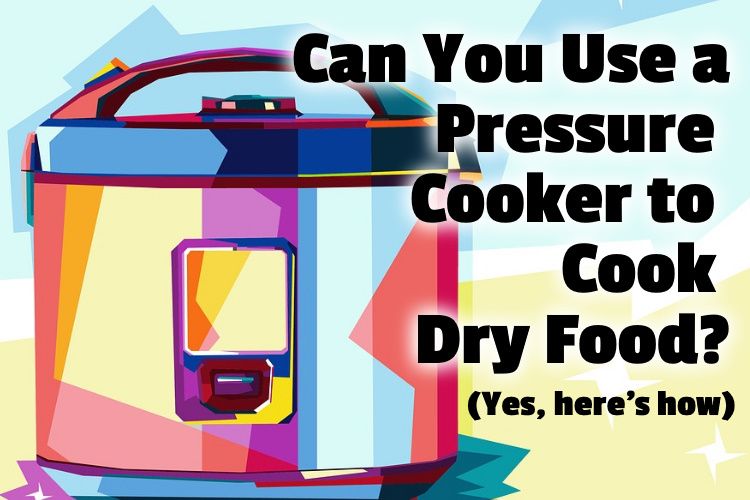 Instant Pot has revolutionized the world of pressure cookers and how we cook each week. But many have wondered can you use a pressure cooker to cook dry food?

I decided to investigate and here’s what I discovered:

You can bake a variety of items in a pressure cooker such as cakes, cookies, brownies, etc. Some baked goods will need to be in a container that you place in the pressure cooker and cover with foil. But for non-baked items, you do need some liquid as liquid is needed to produce steam which creates the pressure effect.

Pressure cookers are handy kitchen appliances that have grown in popularity over the last few years. Knowing this, you jumped on the bandwagon.

But what do you cook in it?

Pressure cookers are safe, versatile machines. I talk more about safety in this recent article, but in this article, we’re going to talk about all the things you can cook in your new pressure cooker.

Typically, people cook tough cuts of meat, soups, and stews in their pressure cookers. But there are so many other things you can cook in your pressure cooker, including dry foods!

You can make bread, cake, and even cookies in your pressure cooker!

Can you use a pressure cooker to cook dry food such as bread or pancakes?

You can, but not without special accessories.

Typically, bread will need to be cooked in a coffee can or similar container. You can use any wide mouth, heatproof container.

It should NOT be airtight but should be covered with foil.

Airtight containers could hold pressure, even after the pressure has been released from the pressure cooker itself. If an airtight he container still has pressure, there will not be a safe way to release the steam.

The foil will allow steam to escape and prevent pressure from building up. This means you’ll have to wait until it cools enough to open it, which could result in soggy bread.

Pancakes, on the other hand, are probably better left to the stovetop.

I did find some recipes for pressure cooker pancakes, but they don’t come out like the pancakes you are probably used to. They come out heavier and more “cakey” than typical pancakes and take longer to cook.

An advantage of making pancakes in your pressure cooker is that there is much less hands-on time. So while you are making breakfast, you can take a shower, get dressed and have your coffee while you wait.

So it may be worth a shot to make pancakes in your pressure cooker if you don’t want to stand over the stovetop to cook. Or if you just want to try something new.

I don’t think I’d recommend it, though. But that’s because I like my typical American flapjacks just the way they are.

If you’re not baking in your Instant Pot, you’re missing out! Cookies-and-Cream Cheesecake AND Confetti Birthday Cake are happening on this week’s #PressurePoint 🎂🎉 https://t.co/WK9zZMVCdH pic.twitter.com/sMQmPO3SOa

What kind of food can you cook in a pressure cooker?

You can cook just about anything in a pressure cooker.

However, most people choose to cook food that typically takes a long time to cook otherwise. For example, things like:

You can even bake in your pressure cooker!

The possibilities are nearly endless, really. You can cook pot roast, brown rice, barley, ribs, even chicken wings. Just google around for recipes. You’re sure to find an abundance of recipes!

Pasta bolognese, made in about 45 minutes in the pressure cooker. pic.twitter.com/VhftNDHQ0O

What can you NOT cook in a pressure cooker?

Trying to cook oatmeal or pasta in a pressure cooker will result in overcooked and mushy food.

Canning should not be done in an electric pressure cooker.

Canning needs to be done at a precise temperature. You can’t set the temperature on electric pressure cookers, which means you can’t guarantee the elimination of harmful bacteria.

To learn more about the advantages and disadvantages of cooking with a pressure cooker, read this recent article on my blog.

You should also be aware of ingredients that sputter when it cooks, as it can clog the release valve.

I’m not saying that you can’t cook with them, I just saying to be careful not to overfill your pot when using them.

Foods that tend to sputter a lot when cooking include:

I took a look at some well-rated recipes that call for some of these ingredients and found some helpful tips to reduce foaming and sputtering. But I even get into the best safety tips to make sure yours doesn’t explode. To learn more about them, check out this article on my blog.

Can you bake in a pressure cooker?

If you want to bake a cake, all you need is a pan that will fit in your pressure cooker. It can be glass, metal, or a silicone baking pan.

Just follow your favorite recipe like you normally would. Then, pour a cup of water in the bottom of the pressure cooker, and set the pan on top of the trivet. If your pressure cooker didn’t come with a trivet, you can ball up some aluminum foil and place it in the bottom.

Many electric pressure cookers even come with a “cake” setting, so you can just set it and forget it! If yours doesn’t have a cake setting, you can use the manual setting and just set the timer accordingly.

You can also make brownies in your pressure cooker.

When making brownies, though, the batter will have to be a bit thicker than usual. The thick batter will prevent your brownies from getting soggy. Some recipes also call for covering your brownies with a plate or foil to keep condensation from dripping on them.

Surprisingly, there are many recipes online for cookies, too! You can make either one giant cookies or several small ones.

One thing that’s really neat about baking in the pressure cooker, is that it turns off automatically.

So, if you bake your cake or brownies or cookies, and then forget about them, they won’t burn! The steam will keep everything nice and moist without overcooking.

Is making cheesecake in an Instant Pot as good as baking it? https://t.co/zNWd8NZOuX (via @thetakeout) pic.twitter.com/MVTu2R8HAe

Do pressure cookers have to have liquid to cook?

Water or any other liquid is essential to using a pressure cooker. The liquid is necessary to make steam and build up the pressure to cook the food properly.  It’s also what makes food cook faster, yet remain tender.

A good rule of thumb is to use at least one cup of water when cooking. Of course, if you’re following a recipe, you should use the amount of liquid the recipe calls for.

So what happens if you don’t put water in your pressure cooker?

Well, for one, it won’t build steam. No steam means no pressure.

While we’re on the subject of pressure and steam, never ever attempt to open your pressure cooker while it is working. Most modern electric pressure cookers have safety features built in to prevent you from opening it. But even so, you shouldn’t even try.

When the food is done cooking, properly release the pressure by using the vent per the device’s instructions.

Now while a pressure cooker does need some liquid, it might surprise you to learn that you can cook all kinds of things in a Crock-Pot with little to no liquid. I break it all down and tell you everything you need to know in a recent article.

Did I cover everything you wanted to know about what to cook in your pressure cooker?

In this article, I took a look at pressure cookers and some of the foods you can cook in them.

What’s your favorite food to make in your pressure cooker? Have you tried baking? If you haven’t, are you considering it?

To read more about the built-in safety features of modern electric pressure cookers, particularly the InstantPot, read this recent article on my blog. I even cover the 1 thing you that’s almost guaranteed to cause a mess or even an explosion.

Air fryers are fast and convenient and allow you to prepare healthier meals without sacrificing your meal's flavor or its crispy texture. However, with so many small kitchen appliances crowding up...