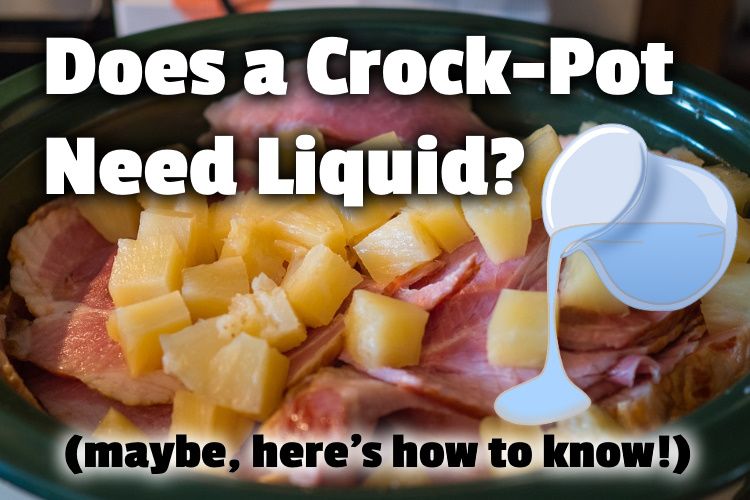 Crock-Pots are a great time-saver for busy people and I use mine frequently. But a common question I used to wonder about was does a Crock-Pot need liquid?

A Crock-Pot might need liquid – it depends on the food you’re cooking. Because Crock-Pots use the natural moisture and fat in the food, some foods won’t need a large amount of added water or broth, if any. You will need to add liquid when cooking drier foods, though.

But there’s a lot more to get into with Crock-Pots and how much liquid to add.

After all, too little on the wrong foods can crack your Crock-Pot! But too much can make your food bland. So let’s keep going!

The rest of this article will answer some essential questions related to adding liquid to crock pots:

Great gravy. Drain the liquid from slow cooker you used for the brisket.

Look at all those lovely meaty bits in the liquid. Melt some butter, add flour mix and heat through. Then start adding your liquid till you have a gravy to your liking. pic.twitter.com/YCJGJaMchI

How Much Liquid Should I Add to a Slow Cooker?

Generally, the amount of liquid that you add to a Crock-Pot should be limited. It all depends on the type of food you’re cooking.

After all, many people complain about slow-cooker food tasting bland.

And too much water when cooking is one of the ways that happens. Click here to read my ultimate guide on how to maximize the flavor in your slow cooker meals and minimize the blandness.

However, if you’re cooking soups or stews, you will need to add a considerable amount of water or (ideally), stock or broth.

The liquid should at least reach the 3/4 mark on the Crock-Pot when adding stews. The amount of liquid you add to the slow cooker depends on how thick you want your stew.

Most meats also release liquids during cooking. Because of this additional liquid, you can cook fatty meats like lamb shank, beef shin, pork shoulder, chicken wings, and drumsticks without adding extra water or broth.

However, leaner meats such as fillets and chicken breast will not turn out well if you dry cook them.

Adding a minimal amount of water creates the steam needed to jumpstart the cooking process. If you want to make your lean meat extra tender, you should cover them with water during the slow cooking.

Bony meat that you will use for broth or stock will also need a lot amount of liquid added to the pot – the ideal amount will cover the bones entirely.

Beans will need a lot of water to cook, especially if you don’t soak them overnight. Cooking beans in a slow cooker without soaking may also require you to lift the lid and replace the lost liquid at some point in the cooking process.

Slow-cooker chili tip: last hour should be cooked with the lid off to evaporate liquid and thicken to perfection. Concentrates flavors and is so noms!!! Pics at 7 hours when I just took the lid off, then at 8 hours.

Can You Dry Cook in a Slow Cooker?

Yes, you can dry cook in a slow cooker!

When dry cooking in slow cookers, you should use foods that already contain a considerable amount of natural liquid. The liquid creates the needed steam to cook the food.

I’ve already named some types of meat that can be dry cooked in a slow cooker. These meats have two things in common: they have lots of natural moisture and fat.

When dry cooking meat, you can also create steam by adding minimal amounts of liquids to it. These could be from the vinegar or the sauce used for marinating, a little beer or wine, or even a small amount of broth.

Root vegetables are also suitable for dry cooking in a Crock-Pot.

The commonly dry cooked root vegetables are carrots, onions, and potatoes. All these contain enough liquid to form the steam for dry cooking.

There are only two categories of food that you should NOT dry cook or cook in a crockpot whatsoever. 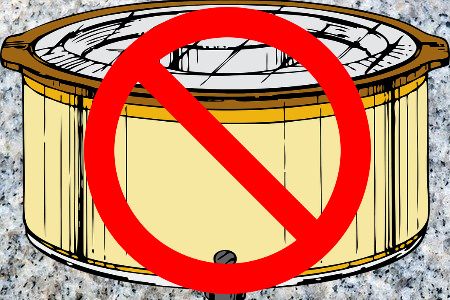 Vegetables are healthiest when they’re semi-cooked.

If you let them simmer in a slow cooker, they overcook and lose most of the vitamins and minerals. Because they have plenty of natural fluids, vegetables will quickly become soggy in the Crock-Pot.

Here are some of the vegetables that you shouldn’t cook in a Crock-Pot:

Foods that are naturally dry or cook rather quickly should not go into a slow cooker. The slow cooking of the Crock-Pot will leave them overcooked, which will give them an undesirable texture.

Here are some of the most common fast-cooking foods:

Getting the right amount of liquid right in a Crock-Pot isn’t hard. It just takes a little practice and you’ll get the hang of it quickly.

However, there are a few reasons why a slow cooker might crack! You’ll want to make sure you’re aware of those too. After all, not only would it ruin dinner, it would also make a huge mess. And you’d have to buy a new one too!

Luckily, I cover all the reasons a slow cooker might crack in one of my recent articles.

Does Meat Need to Be Submerged in a Slow Cooker?

Yes and no. It all depends on how you want your end product.

If you want your meat to break apart easily, don’t dry cook it in the Crock-Pot. You will have to submerge your meat in liquid if you want it to be extra tender.

Leaner meats also need to be submerged in a liquid when prepared in a slow cooker. When cooked dry, they become tough and stringy, which defeats the tenderizing intent of simmering meat in a Crock-Pot.

If you are using a dry meat recipe, dry cooking works perfectly. The only liquid you’ll need is that which creates the steam. Dry-cooking fatty pieces give them a great flavor while keeping them moist.

You should also follow a few other rules when cooking meat in a Crock-Pot:

That being said, if you’re cooking meatballs in a slow cooker, there’s a right way and a wrong way!

Click here to read my ultimate guide on cooking meatballs in a Crock-Pot. I get into raw vs cooked, and frozen vs thawed. That way you can have perfect meatballs every time!

“Use less liquid.” 14 ways to make the most of your slow-cooker this season: https://t.co/2MglfEce5d pic.twitter.com/fA7veggvlV

What Happens if I Use Too Much Liquid in a Slow Cooker?

If you add too much liquid to a slow cooker, your food might be overcooked or have a bland taste.

If the food you’re cooking requires a limited amount of liquid, here are several ways you can pre-empt the dryness without adding too much liquid:

In a recent article, I cover how to make slow cooker food NOT taste bland.

After all, bland-tasting food is one of the biggest complaints people have about Crock-Pots and other brands of slow cookers. It actually isn’t all that hard to get great-tasting food from a Crock-Pot. You just have to know a few key tips.

Just click that link to see those tips on my site!

Here are the key points you should take away from this post:

Every now and then, our Crock-Pot breaks and we have to get a new one. If so, can we recycle the ceramic insert?

Click here to read my ultimate guide on responsibly disposing of Crock-Pots including whether they can be recycled.

link to Can I Leave Food in a Slow Cooker Overnight on Warm?

Continue Reading
link to Why Do Slow Cookers Crack? (Plus Some Safety Tips!)

I love my slow cookers. I've used them hundreds of times and sometimes left them on overnight or while I was at work. But lately, I've heard concerns about them cracking. So I decided to investigate...