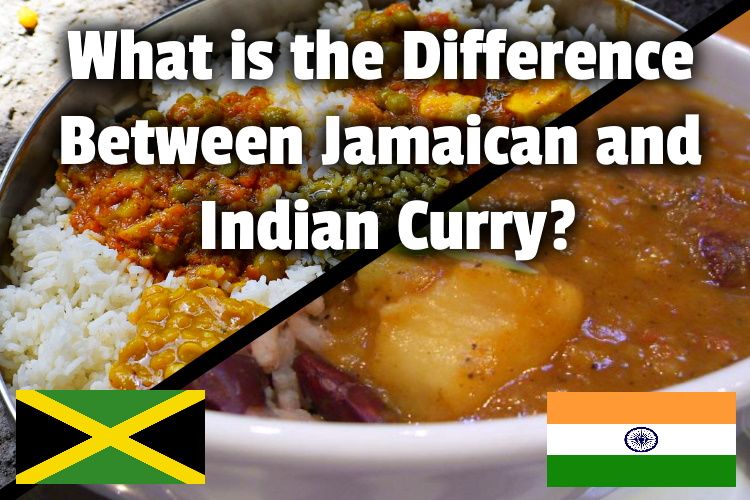 I have loved Indian food for decades, particularly curry. More recently, I’ve been hearing about Jamaican curry. I’ve begun wondering what is the difference between Jamaican and Indian curry.

Here’s what I learned:

But there’s surprisingly a lot more to know about curry.

So today, we’re diving deep into curries. We’ll examine some of the key differences. But we’ll also explore the similarities and if one is healthier than the other.

Ultimately, we’re answering the question of what is the difference between Indian and Jamaican curry?

What is Jamaican curry made of?

Jamaican curry is typically prepared with pre-made curry powder spice blends, and often includes a mix of turmeric, cumin, paprika, cardamom, garlic, and fenugreek. But they also use allspice which is what gives Jamaican curry its unique flavor and sets it apart from most other curries.

Jamaican curry powder is often used as a rub.

The ingredients (chicken, peppers, potatoes, onion, etc) would then be allowed to marinate for a couple of hours before cooking.

Then the ingredients would typically be cooked in boiling water to create more of a stew.

What is Indian curry made of?

In India, curry is really just a combination of spices, and there isn’t actually a dish called “curry” in India. But the spices often used include fenugreek, cumin, turmeric, and coriander. But the leaves of the curry plant are also used in simmering dishes.

There are several etymologies of the word “curry.”

One etymology suggests that “curry” comes from the word carel that the Portuguese used to describe the fragrant, spicy dishes they found in India.

Another suggests that it derives from kari, the word for sauce in Tamil. Eventually, the word “curry” evolved to describe almost any Indian dish with a sauce.

However, I was able to find that traditional Indian curry spice mixes usually contain a cream or coconut milk base with a salt or acid component.

Ironically, curry powder sold in stores (a British invention) rarely, if ever actually contains the leaves of the curry plant.

If you are considering making your own curry, be sure to check out this recent article on my blog where I talk about the differences between coconut milk from the can and from the carton.

Hint: you should definitely use coconut from the can when making curry.

Even in India, you’ll find people arguing over what curry is made up of. It may be used with fish or chicken, and of course vegetables only in many parts of the country.

Further inland, you may find dried coconut in your curry.

Coastal Indian curries will contain more turmeric and the final product will be more yellow in color. Inland curries will use more tomatoes and be redder in color.

What is the difference between curries from different countries?

Caribbean curries use a lot of turmeric and allspice, whereas, in India, the leaves of the curry plant may be used. In Thailand, curries are made with a paste made from garlic, chili peppers, and possibly lemongrass and get mixed with coconut milk.

Curry isn’t actually a spice, but rather a collection of spices, although in India the leaves of the curry plant would definitely be part of it. Today, you’ll find curries all over the world. From India to Thailand to Jamaica.

You’ll even find curries throughout Asia, in Japan, and parts of China.

Indian curry was initially a generic term for sauce-based dishes.

When Europeans came to India, they brought with them the spices that we think of now when we think about curry. Tomatoes, onions, garlic, and ginger helped to develop Indian curry into the delicious spice mixture it is now.

British curries are heavy in tomatoes, onions, garlic, and ginger. They are often spicey, with a coconut milk base. They are usually redder than other curries.

If you’d like to learn more about how Indian curry differs from Thai curry, head over to this recent article. I break both of them down, including the 1 radical difference between the 2.

Just click on the link to read it on my blog.

Caribbean curries are high in turmeric

They often include allspice, cumin, paprika, cardamom, garlic, and fenugreek. They can be made into a paste or a powder and used as a marinade. Jamaican curry is usually bright yellow due to the high amounts of turmeric.

The addition of allspice, which would not typically be used in India, is one of the biggest differences between Indian and Jamaican curry.

However, Jamaica has a large Indian population. Indian households are making their own curries and are mixing spices when cooking, rather than using the pre-made mixes.

I bet eating curry in Jamaica gets the best of both Indian and Jamaican spices!

Curry from Thailand is made using a variety of curry pastes

Curry pastes are made from fresh ingredients and have a thick, moist quality. It can be found on the shelves in most grocery stores.

The paste when left unopened, can be stored for more than 3 years. To read more about how long Thai curry paste can be stored, just read this recent article on my blog.

The curry paste then gets mixed with coconut milk to form a rich sauce.

#pea #microgreens on a #curry lunch #sounds like #deliciousfood. I would just like to add a little more though. Make those #veggies #shine. Can’t wait to see another #amazing #meal #yummy #good #healthy #food pic.twitter.com/6yxfmIpUsH

Like most curry powder, Jamaican curry powder contains spices that are considered good sources of nutrients. These nutrients could include various vitamins and minerals as well as fiber.

However, pre-made spice blends may contain an excessive amount of salt.

While Indian curry is made up of fresher ingredients, it is generally added to dishes that are high in fat and butter.

So, while the Indian spices may be considered healthier, the Jamaican dishes are more likely to be healthier as a whole. And if you make your own Jamaican curry powder, you can control the salt.

If you like Indian food but prefer lower-fat options, chances are you’ll love Nepalese food.

Nepal takes culinary cues from Tibet, India, and China. As a result, it shares many of the same flavors but is generally considered healthier than Indian food.

Read more about Nepalese food and how it differs from Indian food in this recent article. Just click that link to read it on my site.

Just like other traditional spice blends, curry is highly subject to variation.

But if you’re just buying jarred curry powder, chances are anything Indian (which again, is a British invention) will likely be hotter than Jamaican.

Because they are both made with many of the same ingredients, they will provide very similar results. Again, what makes Jamaican curry stand out alone is the addition of allspice.

But to control the spice levels, it’s always best to make your own spice blends.  Paprika is a great way to get chili powder flavor without the heat and smoked paprika is even better!

And if you’re looking for heat, skip Indian and Jamaican curry and head straight to Thai curry!

In this recent article, I demystify and explain all the key differences between Indian and Thai curry and what makes 1 significantly healthier than the other.

But I also get into other curries too. I even explain why the leaves of the actual curry plant rarely get used in curry powders.

Just click the link to read it on my site!

In this article, I took a look at the differences between Indian and Jamaican curry.

In the end, we answered the question what is the difference between Indian and Jamaican curry?

Which one is your favorite?

Also, you should consider getting a food processor for making your curry, Indian sauces or chutneys. It really makes cooking Indian food (and other foods), not just curry, much easier.

Just head over to this recent article to read about how much easier Indian cooking is with the use of a food processor. Just click that link to read it on my site.

Curry Goat – Babble On Babylon by Alpha is licensed under CC2.0

link to 9 Surprising Differences Between Indian and Thai Curry

I love almost all types of food, but Indian food and Thai food are 2 definite favorites. I'm pretty well versed in how the 2 cuisines differ, but I thought I would refresh my memory and really dig...

Continue Reading
link to Does Thai Curry Paste Go Bad? (eventually, so you must . . .)

These days, Thai curry paste can be found on the shelves in most grocery stores and many pantries across the globe. But whether opened and in the fridge, or sealed in your kitchen cabinets, many of...