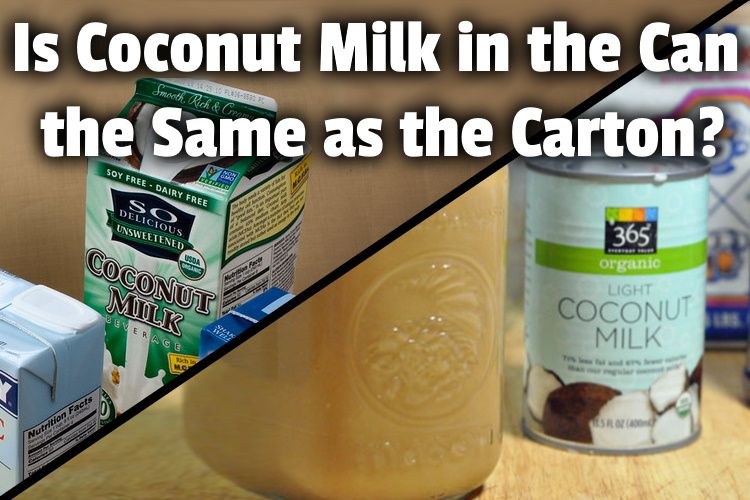 I love all things coconut and I also love to cook Thai food. But one thing I’ve wondered is coconut milk in the can the same as the carton?

I looked into it and here’s what I discovered:

But there’s a lot more to know about coconut milk and whether the refrigerated stuff in the carton should make it into your next curry.

What exactly is coconut milk and how is it made?

Coconut milk is that delicious, mildly sweet, creamy liquid that comes from the meat of the coconut. Coconut milk should not be confused with coconut water, which is the juice inside the coconut.

To make canned coconut milk, the meat is shredded and puréed with water and then strained through a cheesecloth. It can then be used in a variety of recipes including Thai soups & curries.

As we get into more below, canned coconut milk is a lot different than the kind that comes in a carton in the milk section.

Coconut milk from the carton is typically a non-dairy milk substitute that people use for smoothies, coffee creamer, and cereal.

It’s usually found in the refrigerator section of your supermarket and is generally much cheaper.

Coconut milk in the carton will usually contain more than just “coconut milk” in the ingredients, too. It may contain thickeners, sweeteners and other added ingredients.

What kind of coconut milk should you buy? And what about coconut cream!?

You’ve got questions. We’ve got answers.

This is the only canned coconut milk I will buy. Organic, BPA-free, no guar. The only ingredients are organic coconut and purified water. I use this in my soups and curry dishes. pic.twitter.com/9G538U3TYR

Can I substitute carton coconut milk for canned?

Not really is the short answer.

Carton coconut milk is a beverage usually found in the dairy section of your grocery store next to other non-dairy milk. It may be sweetened and is used just like regular milk.

If you want that rich, creamy coconut flavor in recipes, you should stick with canned coconut milk. That’s still true even if you planned to buy the unsweetened carton of coconut milk.

Carton coconut milk has added ingredients, including sweeteners, stabilizers or flavoring that could interfere with the flavor of your dish.

If you’re making a smoothie that calls for coconut milk or soy milk, you’ll probably be fine using the stuff from the carton.

The #healthbenefits and uses of coconut milk pic.twitter.com/FLcxwOF6Mq

How do the ingredients differ between can and carton coconut milk?

The ingredients vary quite a bit between the two products although both typically start with coconut and purified water.

The ingredients in canned coconut milk are listed as:

But the ingredients in coconut milk from the carton are listed as:

These are from the same brand and they are both unsweetened.

As you can see, the stuff from the carton has added flavoring, thickeners and stabilizing ingredients. True, the canned coconut also lists guar gum, which is a thickener just like locust bean and gellan gum. But they are likely used in much lower quantities in the canned stuff.

Plus the carton of coconut milk has much higher water content. That is what makes it pour out of the carton AND why it’s so much cheaper per ounce compared to the can.

The easiest way to figure that out is by looking at the fat content.

That’s a whopping 800% more fat in the can than the carton. And the reason for that is all the added water in the carton that’s not in the can.

But mostly, the carton of coconut milk has a fairly neutral flavor. So that delicious coconut taste so needed in Thai curries and soups would be barely noticeable if you used the carton instead of the can.

Most of the time yes. But it’s always a good idea to check the ingredients. Not all canned coconut milk is unsweetened.

5 Mistakes to Avoid with Canned Coconut Milk — Tips from The Kitchn https://t.co/DSpsQvdDEj pic.twitter.com/SD2qPdUg8f

Can I use carton coconut milk in curry?

So using carton coconut milk exclusively will give you a watery, somewhat flavor-less curry.

What I have done, on occasion, is to use carton coconut milk if my curry (that used a can for its base) is a little thick. Basically, I use just enough from the carton to get the consistency I want in my curry.

If all you had on hand was a carton of unsweetened plain coconut milk, you can make curry with it. Just be prepared to use a smaller amount than you would of the canned. That will ensure it’s not too watery. Then also be prepared to play around with the amounts of curry paste, fish sauce, chili garlic sauce, and other ingredients.

That can help make up for the lack of coconut flavor in the carton coconut milk.

If you love curry, another very common question is what’s the difference between Indian and Thai curry?

In truth, they are actually VERY different although they do share a few ingredients. I break it all down and compare the two cuisines in a recent article.

What really surprised me was how much healthier one is than the other. Just click that link to read it on my site.

We Tested 7 Brands Of Canned Coconut Milk In One Recipe—These Were The Best (And Healthiest) https://t.co/d7WJML1vcv pic.twitter.com/014qhpNVer

Can you drink canned coconut milk?

Coconut milk is packed with nutrients. According to a recent study published by the Journal of Chemical and Pharmaceutical Research and a second study by the Natural Medicine Journal, coconut milk has a variety of health benefits from:

And specifically, that first study went on to find that coconut milk could “prevent oxidative damage and reduce the risk of degenerative diseases.”

However, it is very high in fat and one cup of it may contain anywhere from 350-550 calories. It’s also pretty thick, which is why the stuff in the carton gets watered down so much.

While canned coconut milk can be a great addition to smoothies, there are lots of other ways to enjoy coconut milk, too.

Coconut milk is also rich in potassium and high in iron, and makes a great conditioner for your hair!

Consumed in moderation, coconut milk is a delicious treat that can help you feel full longer, and have more energy.

The solution when you can’t find canned coconut milk at the grocery store. #backtotheroots pic.twitter.com/a7FpUw3hYq

How do you store leftover canned coconut milk?

Unopened cans of coconut milk can just be stored in your pantry.

But if you open a can and don’t use it all, leftover coconut milk should be stored either in the fridge or freezer. Of course, it will last longer in the freezer, but that may cause the texture and taste to change.

Opened cans of coconut milk should ideally be stored in a tightly sealed container.

But it can be stored in the can, covered with aluminum foil or plastic wrap. But going that route, it would be best to use it within a few days.

Coconut milk will last for 7 to 10 days in the fridge if you place it in a sealer Tupperware-style container. When storing coconut milk in the fridge, make sure it is away from strong-smelling items like fish or onions.

Coconut milk will take on the flavors of other nearby foods after a few days.

Coconut can be stored in the freezer for up to 3 months. Freeze coconut milk in an airtight container with enough room for expansion.

You can also put it in ice cube trays to have small amounts on hand. Let them thaw to drink or before adding to your coffee. You can even put the coconut milk ice cubes right into your smoothie before blending.

One thing to be aware of when freezing coconut milk is that it will be “broken” when it’s thawed out.

This means that the fat and the milk has become separated. Just run it through a blender to get it back to normal for cooking and drinking. For that reason, it is not a great idea to add frozen coconut milk to a curry you are cooking on the stovetop.

Coconut milk, whether frozen or refrigerated, can last beyond the expiration date.

How do you tell if canned coconut milk has gone bad?

Throw out any coconut milk that looks or smells bad and always throw out bulging or rusted cans, no matter what the expiration date.

There’s no need to risk making yourself sick, no matter how much you love curry.

The Best Brands of Canned Coconut Milk You Can Buy https://t.co/mp5WMNDQAj pic.twitter.com/89fpMXLQCX

What can I substitute for canned coconut milk?

While nothing can truly replace the flavor and consistency of canned coconut milk, there are some excellent substitutes.

Nothing can truly replace the flavor and consistency of canned coconut milk, but if you don’t have any on hand, or you have a coconut allergy, there are some substitutes available.

Above I mentioned the difference between Indian curry and Thai curry.

But of course, other Asian countries use coconut milk too and have a lot of different flavors. So if you’ve ever been curious about the differences between Vietnamese, Chinese, and Thai food, check out my recent article.

I break them all down and compare the ingredients, flavors, and which one is the healthiest. I was pretty surprised when I saw which one was the most unhealthy.

The Best Canned Coconut Milk to Buy at the Grocery Store – https://t.co/e1lA6QGwhx pic.twitter.com/YGmOjZ6XPj

What is coconut cream?

When cooking with coconut milk, it is a good idea to shake the can a bit before adding it to your recipe. Shaking the can will allow the coconut cream to mix with the coconut milk.

Coconut cream can also be found as a separate product sold next to the coconut milk. It is made of the same ingredients – coconut and water, but just with less water.

Coconut milk and coconut cream taste very similar, so your usage really depends on the consistency you want in your dish. Coconut cream is excellent in curry or Coconut Chocolate Mousse.

Did I cover all you wanted to know about coconut milk and how the cans differ from the cartons?

We have learned a LOT today about the different types of delicious coconut products. In review:

But mostly, we explored the question is coconut milk in the can the same as the carton?

The answer to that question is no. They are fairly different. Coconut milk in the carton is nothing like coconut milk from the can. It’s much more watered down and lacking that strong coconut flavor that is essential for curries and other Thai food recipes.

Carton coconut milk is fine for drinking, coffee creamer, and cereal but does not make a great substitute for canned coconut milk in cooking or baking.

coffee with coconut milk by bour3 is licensed under CC2.0

link to Are Convection Ovens Safe?

Continue Reading
link to Is a French Press Worth It? (vs. Drip & Keurig)

I love coffee, and I've owned lots of different kinds of coffee makers. But when I was first starting to get serious about coffee, I remember wondering is a French press worth it? Here's what...