A watched pot never boils. An unwatched pot, however, seems to boil over as soon as you turn your back. So if you’ve ever wondered how to keep soup from boiling over, or any boiling liquid, I have a solution:

To stop boil-overs on your stovetop, don’t use wooden spoons. Salt, while essential for cooking many things, also does not stop boil-overs. Adding oil does work to prevent them, but that may not work with all flavors. A boil-over preventer disk or silicone spill stopper is the best solution.

But there’s a lot more detail we need to get into, including whether or not a wooden spoon really works. So let’s keep going!

We all hate boil-overs on the stove.

It leaves a giant mess on our hands. And you can’t do a lot to clean it up until the stovetop cools. This is especially frustrating if you have a coil stovetop, rather than a glass or ceramic top.

Preventing boil-over is especially important if you are using an immersion blender to make your soup. Immersion blenders can prevent splatter to an extent. But if the soup is too hot, you’ll get burned.

To read more about making soup using an immersion blender to make soup, read this recent article on my blog.

So, what do you do to prevent boil-overs?

Keep reading to find out!

Does a wooden spoon prevent boil-overs? 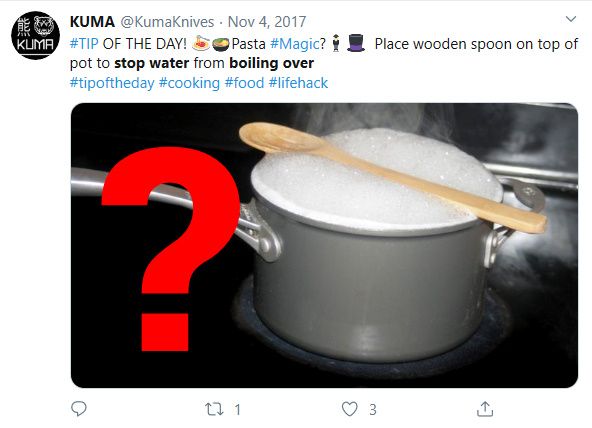 There doesn’t seem to be any scientific evidence to prove that this works. I tried it once, and it didn’t work for me.

I did find some anecdotal evidence suggesting that it works.

From what I’ve seen, the spoon must be natural wood and pretty wide. Put it on the pot before it starts to boil. The spoon will cause the surface tension of the water to change and pop any bubbles before it gets a chance to boil over.

In all honesty, I’m skeptical of this.

It may prevent boil-over for a very split second. But unless you’re really watching the pot, you won’t be able to get to the pot fast enough to actually prevent it from boiling over.

I also think the people who post this on social are also not filling their pots very high which prevents boil-overs in the first place.

So I’m calling this mostly an urban myth. But try it and see if it works for you.

Does salt keep water from boiling over?

Salting water is purely for flavor, and in fact, can cause water to boil faster. Even if only by mere seconds. It definitely doesn’t prevent any boil-over.

Those of us who know our way around a kitchen are used to salting cooking water for just about anything. The reason is that it helps to season whatever you are cooking.

One thing that I don’t salt the water for is hard-boiled eggs.

Salt doesn’t really flavor the egg well. And as I mentioned, salt can make the water boil faster. Eggs should be boiled at a low gentle boil, so we don’t want to raise the water temperature unnecessarily.

To read more about perfect boiled eggs that peel easily, head over to this recent article on my blog. Just click that link to read it on my site.

How do you keep milk from boiling over?

Milk can surprise you with how quickly it boils over.

At first, there are just a few bubbles dancing around the edge of the pot. Your turn your back to do something else, even just for a second, and you’ll inevitably hear the sputtering and hissing of milk all over your hot stovetop.

As milk heats, the surface layer becomes thicker creating a film. The film causes the steam bubbles to form under the film, so you don’t see what’s boiling underneath. The steam and foam become trapped. Eventually, water vapor breaks through, causing the milk to boil rapidly.

To prevent this sudden onset of milk over your stove, be sure to stir the pot every few minutes. This will break that surface temperature and make sure it’s heating evenly. It will also help prevent it from burning.

The bottom line is this: never turn your back on a pot of boiling milk!

We’ve been to the moon, sent spacecraft to the edges of our solar system, have self-driving cars, and artificial intelligence – so why don’t we have cook tops that automatically adjust to prevent water from boiling over? pic.twitter.com/9auqymHL5X

Does oil stop water from boiling over?

Because oil sits on the surface of the water, it interrupts the surface tension. As a result, it prevents water from foaming up and boiling over.

It also prevents flavors from sticking to pasta and other things you want to have flavor.

So, if you’re making pasta, all of the sauce is just going to slide right off, instead of absorbing into the pasta.

I know it’s tempting to add oil to your pasta. Especially when you’ve always used it to prevent your noodles from sticking together. Pasta is very starchy and when it boils, it tends to foam and boil wildly.

But don’t oil your pasta water!

If you find that your noodles are sticking together, instead of adding oil to the water, add oil or butter to the noodles after they’ve cooked. Or make the butter a part of your sauce. This will help your noodles to separate and allow them to absorb your sauce.

Just like pasta, rice is very starchy and likes to boil over, too, even when you use a rice cooker.

If you want to learn more about rice, and how to prevent your rice cooker from boiling over, head over to this recent article on my blog.

Do boil over preventer disks work?

A boil over preventer disk, also called a “pot minder,” or “spill stopper” is typically made of glass, ceramic or silicone. It is heat-treated and non-porous to prevent absorption and bacteria growth.

Just put it in a pot of water, turn up the heat, and cook like normal. As the water boils, the pot minder naturally modifies the size and formation of bubbles rising from the bottom of the pot.

This prevents too many bubbles and the formation of foam. Ultimately, it also prevents boiling over.

Once the water reaches the boiling point, the pot minder will also rattle around the bottom of the pot, alerting you that boiling has started.

Pot minders can be found on Amazon for cheap! This is a small price to pay if it means not forgetting about that pot of boiling water on the stove!

The best one I’ve found is a set of 3 Onown Silicone Spill-Stoppers (click to see it on Amazon).

It’s an Amazon’s Choice item with an almost perfect star rating. Cool colors, eligible for free-shipping and fits pots and pans from 6 to 11 inches.

Even cooler is that it’s:

I prefer that over metal as it won’t rust, and I like it better than ceramic as it won’t break if you accidentally drop it (which can happen if you pick it up and it’s hot).

Plus silicone doesn’t get as hot to the touch as metal or ceramic.

Should I boil water with the lid on or off?

Starting water boiling with the lid on helps it to come to a boil faster.

Covering your pot makes the heat leave the pot faster. If it’s leaving the pot faster, this means the pot is coming to a boil quicker.

Once the pot is boiling, turn the heat down, and take the lid off or partly off.

Turn the heat down as far as you can while keeping the water boiling. If you keep the temperature high, you are really just wasting energy. You are also encouraging a boil-over.

It’s also important not to remove the lid too quickly.

Just like you wouldn’t remove the radiator cap from an overheated car very carefully, don’t remove the lid from boiling water too quickly. While it likely won’t erupt like a pressurized radiator cap, it could boil over all over your stovetop.

As the water boils, it turns into steam.

As more water boils and more steam is produced, the pressure builds up. When the water contains starchy items, like potatoes or rice, the surface tension of the water can’t hold back the force of the rising steam.

This makes the bubbles more elastic, essentially creating a foam.

This makes the bubbles last longer, causing them to build up. Eventually, the foam bubbles will boil over, making a giant mess.

To stop a pot that is close to boiling over, simply lift it from the heat.

If necessary, blow on it like you would a cup of coffee. This should give you enough time to turn down the heat enough to keep it at a boil, but not so hot that it will boil over.

One effective way to prevent boil-over is to use a bigger pot. Next time you want to make your favorite soup, use a bigger pot, even if you think it may be “too big.” If possible, try using less water.

If cooking something very starchy, like potatoes, rice, or pasta, try giving it a good rinse before cooking it. This will help reduce some of the starchiness that leads to foaming and eventual boiling over.

Did I answer all of your questions about preventing soup from boiling over?

In this article, we lamented over the mess that a pot boiling over can create.

We also talked about some of the wives’ tales about preventing boil over. We talked about putting wooden spoons over pots, adding salt, and whether boil over preventer disks work.

Most importantly, we answered the question of how to keep your soup from boiling over. And my favorite way to do that is with a boil-over preventer disc like this one from Onown Silicone Spill-Stoppers (click to see it on Amazon).

Here’s to never having to scour our stovetops again!

2 thoughts on “How to Keep Soup from Boiling Over (Solutions, not urban myths)”

There's nothing quite like a freshly toasted bagel! Toasters are pretty simple to use too. While common sense tells us not to stick a knife into the toaster or get it wet, can a Toaster...

Continue Reading
link to Are Blendtec Blenders Loud? (and how to quiet them)

There is no denying the fact that Blendtec makes some of the best blenders available on the market. However, with a powerful motor, you often get a lot of noise. So are Blendtec Blenders...