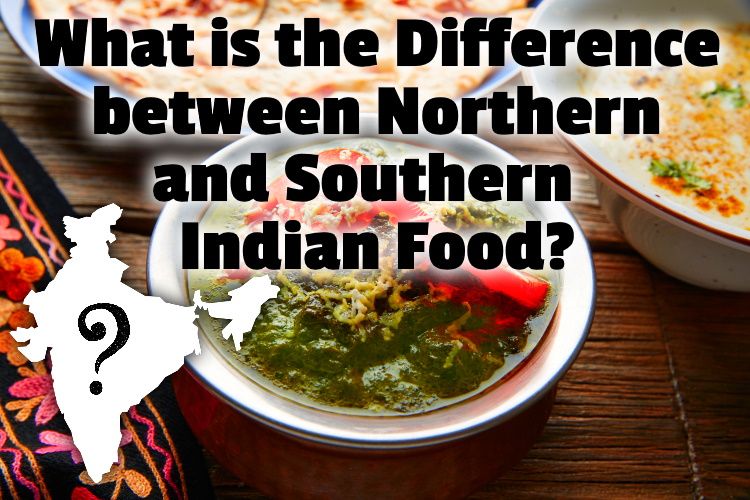 I love Indian food of all kinds and have eaten it for decades. But I’ve wondered what are the differences between Northern and Southern Indian food?

Here’s what I’ve learned from loving it for decades:

Indian food is about more than just curry. After all, you can find curry and dishes similar in content and flavor in both Thai and Nepali cuisine.

The flavors of India are so diverse across the country that you really can’t pin Indian food down to one thing, just like you can’t say there is one particular food that is American.

It all depends on the region.

But one area is known more for its vegetarian food, whereas another is known to be the spiciest! Let’s take a detailed look at what truly makes these two regions different when it comes to their signature dishes.

Here is a quick glimpse of the differences between the two regions:

What is authentic south Indian food?

South India has a more tropical climate than north India.

This makes it a great place to grow rice, which happens to be the staple food in South Indian cuisine. South Indian food also heavily relies on lentils as a base.

When it comes to southern curry, the consistency tends to be more on the saucy, runny side so that it easily pours over rice. They cook with higher water content and use a lot of coconut oil and milk in their recipes.

There is a distinct spiciness and sometimes bitterness or sourness associated with southern Indian food.

Both north and south use a lot of the same spices, but south Indian food will often use the whole curry leave as an accent and to add more spice to a dish. They also employ tamarind as their means of sourness.

As you can see, there are many vegetarian dishes served in south India, which heavily rely on rice, lentils, stews, tomatoes, and coconut.

There are a few exceptions that include meat, but most “meat-based” dishes are composed of seafood. But what about nearby Nepal?

In fact, there are several similarities between north Indian and Nepali food as well.

You can read more about in this recent article. In it, I get into all the ways they are similar, but also the 1 crucial way in which they differ.

What is the famous food of North India?

If you were to go to an Indian restaurant, most likely they will be serving north Indian dishes.

North Indian cuisine is often characterized by its use of spice, dairy products, and wheat-based staples, with much of its culinary influence coming from the Arabs and Persians.

Unlike the south where rice is the staple product, the north heavily relies on wheat. They make heavy use of the tandoor oven for baking things like naan bread and the Tawa griddle for making roti, which is like a flat, round, wheat crepe.

Because bread accompanies many of their dishes, they tend to make their curry much thicker so that it can be scooped. They also use a lot of dairy products, like yogurt, milk, ghee, and paneer (cheese) to flavor and thicken their sauces and curries.

Some common North Indian dishes include:

Indian food 👇🏽 never seen on the menu in Indian restaurants 😊.
Also super #comfortfood 😌for many from Southern India.
It’s gojju (a tamarind based dish) with rice and peas poriyal! pic.twitter.com/u4wB4gV9V1

It really depends on what you classify as “healthy.” They both include a lot of healthy ingredients.

In fact, 40% of all Indians are vegetarian. So no surprise that vegetables make up a big part of their cuisine, especially in the north where more of the vegetarians reside. (source)

The reason some may think that South Indian food is healthier is that there is not as much dairy used.

While a lot of Indians are vegetarian, they are not typically vegan. So where you do see large pockets of vegetarians, you tend to also see higher usage of milk and dairy products.

The south relies heavily on coconut products (milk, oil, etc.) whereas the north uses a lot of yogurt, butter, and cheese.

So, as far as fat content and possible food sensitivities, the south may be considered healthier.

South Indian food is almost completely vegetarian, or at least pescatarian as they do use seafood in quite a few dishes. You can still find several vegetarian dishes in the north, but you will also find meat a bit easier up there as well.

This has to be the most spectacular South Indian meal we have ever eaten .. how many dishes can you name? Southern Spice @TajHotels Coromandel Chennai, #HighwaymenRnM #foodstagram #nomnomnom #food #snack #travel #lifeontheroad #traveller pic.twitter.com/cki5Ki6tUI

As a general rule, South Indian food is spicier than North Indian cuisine. Northern Indian food uses the milder garam masala, a spice blend of cinnamon, cloves, coriander, mace, and nutmeg. In the south, they tend to use sambar powder which is similar but contains dry red chilies

It can be easy to think that this is due to an increase in spices used or even differences in the types of spice utilized in their dishes.

This may be partially true.

South Indian dishes do use the curry leaves more often, and the garam masala spice blend used in the north does tend to have a sweeter taste. However, there aren’t too many flavoring differences between these two regions.

Perhaps one of the biggest contributing factors to the difference in spice level between the north and the south is due to the dairy content.

Additional milk, yogurt, or other dairy products can tame down the spice level in those northern dishes, whereas the south tends to use more water or thinner coconut milk.

But if you like spicy curry, you should definitely go with Thai food.

In a recent article, I do an in-depth comparison between Indian food and Thai food, including a few of the key differences between each of their curries.

You’ve got to be a #Foodie to know how 😋#homemade is best 👌🏼 pic.twitter.com/qP9Fp5A5MJ

Is tandoori North or South Indian?

Tandori chicken, made in a clay oven called a tandoor originated in northern India in the state of Punjab. The origins of this dish and oven date back to 3000 BC.

But it did eventually make its way to New Delhi and beyond.

And, of course, it’s become a staple in the United States at almost every Indian restaurant regardless of whether the owner’s ancestry is northern or southern.

It’s been in the US since the 1960s and was supposedly a favorite of Jackie Kennedy.

Made some chicken tikka masala served with basmati rice pic.twitter.com/hlwRdibA55

Tikka masala is more northern than southern Indian food. However, to a large degree, it is a British invention dating to when the UK occupied India. It is served far more in the UK and the US than it is in India. But the origins of the dish can be traced to Punjab in the north.

So it’s a complicated answer.

But like a lot of so-called ethnic cuisines served in the West, it’s not exactly what you would find in the native country. And the west’s obsession with occupying countries around the globe has forever altered the cuisines of the world.

Luckily it’s not all bad, as I love, for example, the French influence on Vietnamese food.

So you’ll most certainly find chicken tikka masala at every Indian restaurant in the US and UK, no matter whether the owner’s lineage can be traced back to northern or southern India.

Just don’t expect it too much if you’re traveling to India.

Biryani is a classic Indian meal. It can’t be classified as northern or southern because there are so many different varieties served across the country.

The exact origin of the dish is unknown. However, the name biryani itself is taken from the Persian language. It could have either been taken from a word that means “rice” or “to fry, to roast.”

Because the name has Persian origin, the dish may have started in north India. However, since the staple of biryani is rice, it is more likely that the dish is of southern origins.

Regardless of its origins, the dish has been adapted many times over the years and now has variations that are served in both north and south India.

Here are a few of the biryani variations by region:

We hope this clarifies everything you wanted to know about North Indian versus South Indian food.

While some of the basic flavors may be similar, there are some distinct differences between the two regions. North India uses more dairy products like yogurt, milk, ghee, and paneer, and their curries and sauces tend to be thicker.

They also use a lot more bread since wheat is a staple crop. South India relies on coconut a lot more and tends to have spicier dishes with rice as a base.

link to 9 Surprising Differences Between Indian and Thai Curry

I love almost all types of food, but Indian food and Thai food are 2 definite favorites. I'm pretty well versed in how the 2 cuisines differ, but I thought I would refresh my memory and really dig...

Continue Reading
link to What is the Difference Between Indian and Nepalese Food?

I have loved Indian food for decades. More recently, I've begun hearing about Nepalese food and have started to wonder what is the difference between Indian and Nepalese food? Here's what I...