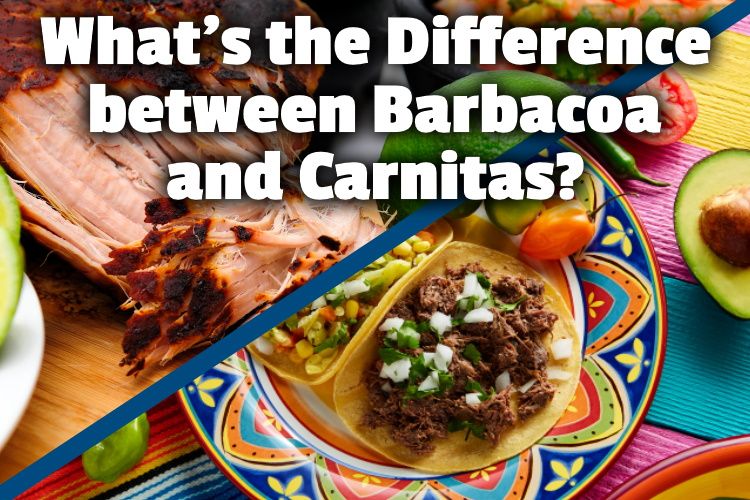 Living in Texas, I’m no stranger to Mexican food, and I especially love slow-cooked meats. But for friends and family who live elsewhere, I often get asked what’s the difference between barbacoa and carnitas?

Here’s what I know from eating and cooking a lot of both:

The difference between barbacoa & carnitas is the type of meat & how carnitas is finished at the end. Barbacoa can be beef, lamb, or goat. Barbacoa, like carnitas, is slow-cooked on the stovetop, oven, or Crock-pot. But, carnitas, which is always pork, get shredded into large chunks after cooking & browned until crisp.

But that only scratches the surface of these 2 amazing Mexican types of meat.

There is no denying that Mexican food is beloved by just about everyone. And thanks to restaurants like Chipotle, we know that Mexican cuisine is about more than just tacos.

Meat is the base of many Mexican dishes and there being so many options available. So, it can be difficult to tell the difference between the ones that look alike.

So let’s take the mystery out of it.

Tuesdays are for tacos like the barbacoa tacos at Vera’s in Brownsville! Only problem is they’re only open Friday-Sunday but it’s well worth a stop on The Texas Bucket List! See the story at https://t.co/cw2YN442EG #thetexasbucketlist #tacos #barbacoa #brownsville pic.twitter.com/9Z62vv9X41

What is carne barbacoa?

Technically, barbacoa refers to how the meat is cooked rather than the type of meat used.

Literally, the word barbacoa translates to barbecue as you may have guessed. Once upon a time, this preparation of meat involved placing the meat in an underground oven.

Literally, a whole lamb, goat, or side of beef would be cooked in a pit in the ground. The meat would then be steamed until it was nice and tender, practically falling apart and giving it its shredded meat look.

Nowadays, barbacoa is typically made on a stovetop or in a slow cooker, unless you live in a very traditional household. But you can also use a lamb shoulder or beef roast in a roasting pan and cooked on a grill too.

Just make sure to not have the pan directly over flames; you want indirect heat.

While most Mexican restaurants – like the infamous Chipotle – serve beef barbacoa. But in traditional Mexican kitchens, you might also see lamb and goat.

Want a great recipe for barbacoa?

This one, from Simple Nourished Living, with it a nod to one of my favorite chefs, Rick Bayless, is outstanding.

Best Pork Carnitas are easy, cooked to perfection in the slow cooker or instant pot, and come out juicy and crisp every time! This Carnitas recipe hast he best blend of spices for the most flavor! #thesaltymarshmallow #slowcooker #instantpot #carnitas https://t.co/bLk8ky4rTS pic.twitter.com/Hkzlms8pPL

Upon first glance, it is very easy to see how carnitas can be confused for barbacoa.

However, carnitas is made solely from pork and is prepared a little bit differently. Boneless pork shoulder works great.

The heavily marbled pork cut is typically braised or simmered for about 3 hours in a Crock-pot with seasoning and lard until it is tender enough to shred into large chunks.

At the end of the cooking process, the meat is browned in a cast-iron skillet until crisp.

Want a great recipe for carnitas?

Going back to Rick Bayless again, here is his outstanding recipe for Michoacan-style carnitas. Don’t know Rick? Well if you’ve been living under a rock and don’t know him, it might seem strange that I’m recommending Mexican recipes from someone who isn’t Mexican.

And that’s true, but Rick has literally spent decades exploring all parts of Mexico and Mexican cuisine, owns numerous James Beard-awarded Mexican restaurants. AND, he was awarded the highest honor available to foreigners from the Mexican government; the Mexican Order of the Aztec Eagle.

Trust me. If you love Mexican food and cooking, you should get to know him. I literally own all of his cookbooks and got him to sign one of them. He’s a heck of a nice guy too!

CLICK HERE to see all his cookbooks on Amazon

Taco Tuesday special barbacoa or carnitas tacos 3 tacos rice and beans $6.99 we have margaritas Togo give us a call or order online 11 to 6 pic.twitter.com/o7lzkj43bD

Which is better barbacoa or carnitas?

It’s really difficult to say that one of these meats is better than the other. It’s all about flavor and diet preferences as well as the dish(es) you are pairing them with.

When it comes to flavor and texture, barbacoa stands out a bit more than carnitas, especially when you are talking about beef barbacoa. It is heartier and has a bolder flavor.

On the other hand, carnitas has a much lighter flavor profile. But has the crisp texture that comes from browning it after slow-cooking it.

Some restaurants will simmer their pork with berries and bay leaves, giving it a slightly fruity flavor that reminds you of a light roast coffee. But the best carnitas is pretty simple, letting the pork flavor speak for itself.

With the keto diet all the rage right now, you may be asking which meat is better for those with carb restrictions.

Both carnitas and barbacoa are suitable for the keto diet, though carnitas may be the better option. A serving of carnitas at Chipotle has 0 grams of carbs while the beef barbacoa has 2 grams.

What it really comes down to when eating out on the keto diet is the side dish(es) offered with either of these meats.

In a recent article, we go into more detail about the keto diet when eating out at a Mexican restaurant. You want to be careful to avoid tortillas, beans, rice, chips, and possibly even avocado, depending on how much you are planning to eat.

If you don’t have diet restrictions, then you may just want to try both types of meat with all the glorious topping and side dishes to see which you prefer.

Is carnitas the same as pulled pork?

Not really although both start out being slow-cooked.

Carnitas, like pulled pork, is made from a marbled cut of pork and cooked until it is tender enough to be pulled and shredded. Boneless pork shoulder works great for either one.

However, cooking carnitas requires an extra step to make it carnitas. The meat is browned in a skillet after 3 hours in a slow cooker. This gives it a browned color and slightly crisp texture on the outer layer.

In addition to the difference in cooking methods, pulled pork and carnitas usually have different seasoning methods and mixes. Common seasonings for carnitas are a mix of salt, pepper, onion, oregano, cumin, garlic, and chili powder, as well as lime juice.

Also, pulled pork is often shredded and mixed with barbecue sauce which gives the end result a very different flavor from carnitas.

Carnitas are made to be either eaten on their own with salsa or as a filling for tacos.

What is the difference between barbacoa and steak?

As we already covered, barbacoa is more about the way the meat is cooked rather than what the meat is itself.

Though the term does typically refer to Mexican shredded beef, it can also be made with various other types of meat, depending on the region you’re eating in. Lamb and goat make great barbacoa too.

The term barbacoa is of Caribbean Indian origin and it is where we get our modern term barbecue. However, these two things are very different.

Barbecue refers to cooking food over a grill, like a steak or a burger.

On the other hand, barbacoa is a steaming and baking process than renders meat so tender that it begins to fall apart. It was traditionally cooked in an underground pit by wrapping the meat in maguey leaves with a mixture of herbs, spices, and chiles.

Today, barbacoa is usually made on the stovetop or in a Crock-pot where you can still maintain moisture without building an oven under your backyard.

When it comes to the type of beef used for barbacoa, it is very different from steak.

Typically, the beef cuts used to make barbacoa are taken from the heads of cattle, such as the cheeks. These tend to be more tender cuts than those used for steak, which is usually taken from the rib if you are looking for the best cut.

What would you make with these pork carnitas?

What cut of pork is carnitas?

When you are looking to make your own carnitas, you will want to make sure you use the right cut of pork.

The right cut needs to be heavily marbled. That way, the fats and collagen break down to make the meat nice and tender. This means that the pork shoulder or butt, as well as picnic ham cuts, are the best for carnitas.

I prefer boneless pork shoulder for my carnitas. But bone-in can work too since you’re slow cooking it and it will be easy to pull off the bone.

I’ve also heard of people using pork tenderloin too which would be much leaner.

However, since you are rendering most of the fat out of the pork by slow cooking, I’m not sure it’s worth the minor trade-off of fat for the pretty big loss of flavor from that fat.

So the best way to go for flavor and ease of cooking is boneless pork shoulder.

Did I cover all you wanted to know about carnitas and barbacoa and how they differ?

Carnitas and barbacoa meats may look very similar, but they are in fact very different.

Barbacoa refers to the method in which the meat is cooked – which could be beef, goat, or lamb. The meat gets slow-cooked until tender, and then shredded.

Carnitas is strictly pork. While it does also get slow-cooked, at the end of the cooking, large chunks of it get browned in a skillet to give it a crispy texture.

You can make some great Mexican dishes with both of these meats. Each has its own flavor profile. Try them both! You may just find one of your new favorite dishes.

Cooking rice and making it into your meal has been part of many cultures and households for a long time. But if you're used to cooking rice on a stovetop, you've probably wondered what makes a...

Continue Reading
link to Can You Use an Extension Cord on a Traeger Grill? (Yes, if . . . )

If you just got a Traeger grill, or even if you’ve had it for a while, you may decide you want to move it further away from the outlet. After all, it's not safe to be right up against a wall....