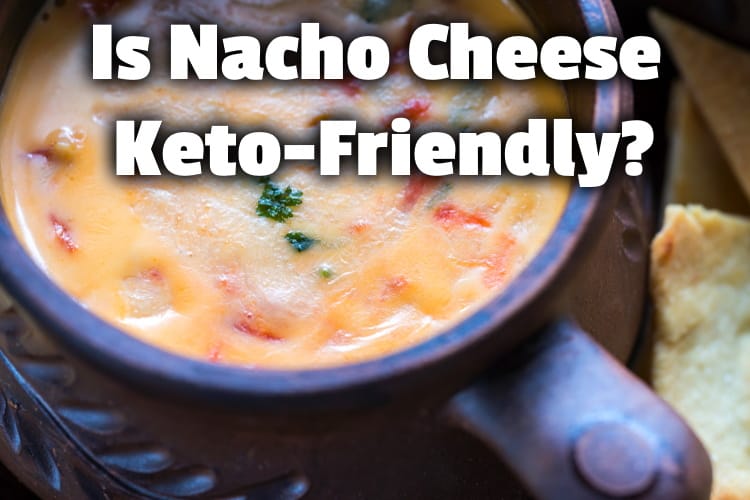 Living where I do, I’m a huge fan of nachos and Tex-Mex in general. I know to stay away from regular chips on a keto diet, but is nacho cheese keto-friendly?

After doing some tasty research, here’s what I found:

Nacho cheese can be keto-friendly. Sometimes called queso, it doesn’t have to be high in carbs, especially if you stay away from Velveeta. This is because the harder the cheese, the fewer carbs it has. Instead, make your own nacho cheese by melting cream cheese, or regular American cheese & mix in no-sugar-added salsa.

However, there’s more than just staying away from Velveeta, though. And it goes without saying you’ll need to avoid traditional corn tortilla chips.

In this article, we’ll dive into the world of keto from a cheese lover’s point of view.

We’ll talk about carbs, what type of Mexican food you can eat while on keto, and how you can eat queso and still stay in ketosis.

But before we get going, have you tried the Spicy Nacho Keto Chips from Real Ketones?? Those are the best tasting keto tortilla chip I’ve found. And they’ll go great with your nacho cheese or just to have as a snack around the house!

Just click that link to learn more about them on the Real Ketones website. Only 2 net carbs, gluten-free, and, of course, sugar-free.

But for now, let’s dive in a little deeper and explore nacho cheese and the right AND wrong way to include it in a keto diet.

Can I eat queso on keto?

Yes is the short answer. But, let’s go over the basics of keto so we can decide if queso is okay to eat.

A ketogenic diet consists of 70% fat, 25% protein, and 5% carbohydrates. This forces the body to burn fat instead of carbs. The lack of carbohydrates puts your body into a state called ketosis.

Going into ketosis has many proven benefits such as weight loss, blood sugar control, improved energy level, lower blood pressure, and much more. The vital part of keto is staying in this state. There are foods you should avoid while on keto but is queso really one of them?

Queso is made of cheese, chili peppers, and milk. Just like most things on keto, there is always a way to turn your favorite meal into a keto-friendly meal. Now cheese isn’t bad for keto diets at all. Actually, it’s recommended.

However, having said that, there are two types of queso, the restaurant queso, and queso you buy or make. The queso in restaurants isn’t very keto-friendly because of the milk and flour that is added to it.

The milk has a lot of sugar in it, which isn’t keto-friendly. If you use anything but regular milk, you can get by, but normal milk just has too much sugar in it. Now flour is a major thing to avoid on keto. However, the good news is that queso is easy to make without flour. Restaurants use flour to thicken their queso.

So the answer is yes. You may eat nacho cheese, what we call queso here in Texas. You just have to be careful where you get it from and what’s in it. Just remember no flour and no Velveeta, and for the most part, you’ll be just fine.

Queso is excellent, but what about nachos?

This is what a Taco Remix is!! (Only a couple more #keto posts I swear!) This one is a Keto friendly @tacobell meal. 4 soft tacos without the shell, and 2 sides of nacho cheese on top. Who says Keto is hard!? This is the most delicious “diet” I’ve ever been on hahaha pic.twitter.com/9285iUBckn

Are nachos high in carbs?

When we look at carbs, we are actually looking at each individual food. So to answer the question of are nachos high in carbs, we have to look at what’s in it.

Nachos usually are made up of some type of chip, frequently tortilla chips, and cheese. They sometimes have additives such as guac, sour cream, salsa, and more.

Out of all these things, the food that has the most carbs are the tortilla chips.

A typical set of chips and cheese would be around 36 grams of carbs. However, tortilla chips have 46 grams of carbs for one cup of chips. So can you guess where most of those carbs come from?

Now you can make keto-friendly nachos rather quickly. Like I said before, simply switch the tortilla chips out for a chip that has fewer carbs, such as the delicious Spicy Nacho Keto Chips from Real Ketones (click to see the current price, or order, on the company’s website). Guac, salsa, and sour cream are all low in carbs, so add those on too.

Now while guac has 24 grams of carbs, most of this is made from fiber. Which means it’s great for keto! This is because you’re only getting about 8 grams of net carbs per serving. I’m not sure about you, but that definitely fits within the goal!

Just remember that moderation is vital and to substitute when necessary; when you know what to avoid, you can make almost any meal keto-friendly. I’ll talk about later on in this article, though.

Does melted cheese have carbs?

Most cheeses have very low carbs and are made up of fat and protein.

Swiss, feta, cream cheese, gruyere, and much more cheese are perfect for keto diets when it comes down to exact carb count though it depends on what cheese you use.

Lucky for you, I know a fantastic cheese sauce recipe. It super simple and taste a lot better than customarily processed cheese sauce.

All you need is:

Put this all together into a saucepan, and make sure to stir frequently!

This sauce has 13 grams of fat and only 1 gram of carbs! The serving size is about ¼ of a cup. That means you can make soups, add cheese on top of your favorite meals, or eat it with some low carb chips such as, pita chips or you can even make your own chip!

Now you have a fantastic sauce that can go with just about anything. Try making some cheese and broccoli soup!

But wouldn’t it be better to melt some Velveeta?

How many carbs are in Velveeta?

Ah, Velveeta. It seems to be the perfect liquid gold out there, right? Well, if you’re on a keto diet, then you might want to think again before eating a slice.

While Velveeta is easier to melt and might taste pretty good, the carb count isn’t that great. Velveeta has 3 grams of carbs for every 1oz. It also has about 3 grams of sugar and only 6 grams of fat.

Remember that sugar count? Velveeta contains more lactose than normal cheese. Obviously, this is because of how much milk it is made with. In contrast, real cheese is made with very little lactose.

Not to mention that Velveeta has very little nutritional value. This is why I say to steer clear of Velveeta while on keto. There are plenty of other cheeses to choose from, and trying different things can help you get out of your comfort zone.

You can even try other keto-friendly dairy products. Such as yogurt, which I actually have a recent article about.

If you love spicy food guys, you need to make this smoky Mexican chili paste!

You’ll never go back to store bought. It adds fantastic flavor to keto chili and great for marinating meat and veggie sides such as cauliflower rice

What Mexican food can I eat on keto?

I mentioned a few things to avoid on keto early, but let me give you a better list.

Foods you should avoid while on keto consist of

Sounds like most of the things in Mexican food, right? Well, even Mexican food can be made to fit a keto diet. Fresh salsa, sour cream, cheese, lettuce, avocado, and much more are all keto-friendly. Remember that tortilla shells and chips are bad, so replace them with lettuce!

I have a recent article that talks about eating at Mexican restaurants on a keto diet.

In this article, though, I’ll show you some recipes you can make at home to spicy up your food. Our first recipe is what this entire article is about queso!

We’re going to use sharp cheddar cheese, half and half, and a mix of spices (your choice).

Don’t forget to throw in a sauce. I have a recent article that talks about balsamic vinegar; all you got to do is click the link to learn more about how to add it into your keto diet.

What you’ll need is avocado slices, salsa, taco meat, and eight slices of your preferred cheese.

Hopefully, I covered all you wanted to know if nacho cheese is keto-friendly

In this article, we took an in-depth look at the world of keto while being a cheese lover.

You can eat cheese in any form, whether it’s queso, nachos, or cheese sauce. You just need to know what to avoid and watch your carbs intake. Stay away from Velveeta and go for cheeses like sharp cheddar or feta.

Cheese is a beautiful thing to eat, and you don’t have to throw it out the window to stay on keto.

Have you tried the Spicy Nacho Keto Chips from Real Ketones?? Those are the best tasting keto tortilla chip I’ve found. And they’ll go great with your nacho cheese or just to have as a snack around the house!

Just click that link to learn more about them on the Real Ketones website. Only 2 net carbs, gluten-free, and, of course, sugar-free.

link to How to Reheat McDonald's Chicken Nuggets (7 Best Methods)

Continue Reading
link to Does Herbal Tea Expire? (No, so here's how to know if it's bad)

It seems like everything you can purchase at your local supermarket has some sort of expiration date, including your favorite herbal teas. But does herbal tea expire? As a general rule, herbal...