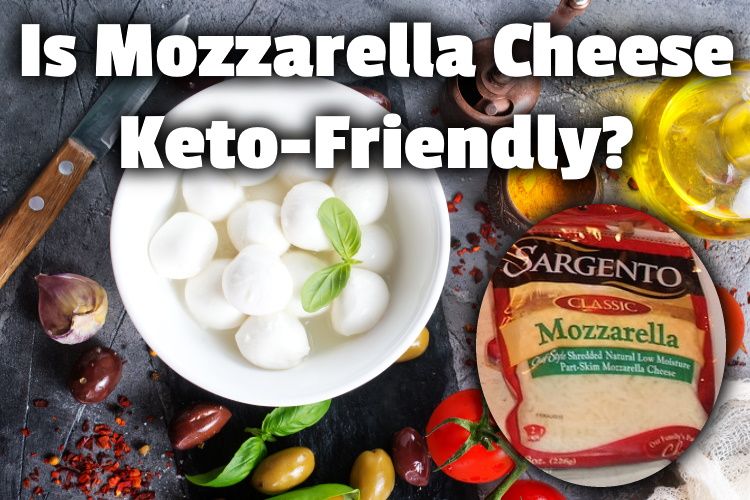 One thing that people crave the most while on a keto diet is dairy, especially cheese because most cheeses are high in fats and low in carbs. The most loved cheese throughout the world is the Mozzarella cheese. But is Mozzarella cheese keto-friendly?

Here’s what I know from some tasty research:

Yes. Mozzarella cheese is keto-friendly. The net carbs can range from 0 to 2g per serving depending on the type of mozzarella. However, it’s important to consume it with other keto-friendly foods. For instance, while Mozzarella is fine, pairing it with tomatoes and balsamic vinegar could knock you out of ketosis.

There is so much more to learn about Mozzarella on keto-diet.

Lets’s dive in to know more.

Rise and grind this week with a #keto take on a breakfast classic. Try out our new Keto Tomato Basil Omelette, made with egg whites and stuffed with sweet tomatoes, fresh basil and mozzarella cheese!

Yes, is the short answer.

Nothing compares to the texture and flavor of freshly sliced mozzarella cheese. And the good news is that it’s pretty low in carbs.

Some may even consider it “zero” carbs since it only has 0.8 grams of net carbs per 1-ounce serving.

One popular way to consume fresh Mozzarella (besides on a Margherita pizza, which is strictly a no-no on keto) is Caprese salad. Freshly sliced tomatoes and Mozzarella, fresh basil, and a drizzle of olive oil and balsamic vinegar make the best Caprese salad.

Unfortunately, tomatoes and balsamic vinegar aren’t the most keto-friendly ingredients. Balsamic, especially, is very high in sugar, which means it is also high in carbs. It may be okay for those on a cyclical keto diet (which we will describe shortly), but you still need to be careful.

You can read more about balsamic vinegar on a keto diet in my recent article. Click on the link to read the article.

Of course, this doesn’t mean you can’t enjoy your Caprese. You may only need to forgo the balsamic vinegar. Sherry vinegar makes an excellent keto-friendly substitute. And use more mozzarella than tomatoes, which have about 5 grams of carbs per tomato.

Does hard mozzarella cheese have carbs?

The good news is all types of mozzarella are low in carbs. But some are higher than others. Low-fat hard mozzarella cheese, for instance, is going to be a little higher than some of the other ones.

There are a few different types of Mozzarella cheese. Mozzarella is more than just the freshly sliced, shredded, or string cheese forms.

And each type is slightly different in its macros, including net carb count (and we’ll look at the carb count on all of them further below).

The six main types of Mozzarella include:

Here is a table including each type of mozzarella cheese and their macros per 1-ounce serving:

Of course, every brand’s label could vary slightly, but they should all be close to these numbers.

Will cook potato bombs with mozarella cheese inside ❤ #carbs pic.twitter.com/YftjR7MlNa

How many net carbs are in mozzarella cheese?

As you can see from the chart above, the amount of net carbs in Mozzarella depends on the type. Most are under 1 gram per 1-ounce serving; however, mass-produced part-skim Mozzarella may have more.

Now, the question remains: how many carbs can you eat on the keto diet? It depends on the type of keto diet you are following.

There are a few variations on the keto diet, each with its own recommended ratio of fat to carbs to protein.

Being based on percentages, the number of carbs allowed in the diet will vary from day to day, depending on what you balance it with. To avoid any risk, try to stick to about 20-30 grams of net carbs per day on average.

In some cases, you can even have up to 50  grams, particularly with a cyclical ketogenic diet.

There are hundreds of types of cheese. Fortunately, all of them are very low in carbs and high in fat, which makes them a great fit for a ketogenic diet.🧀🧀https://t.co/EijMHCJYQH#ketodietplanforbeginners #ketorecipes #Keto #Ketogenic #WeightLoss #Ketosis #KetoGuru #eatclean pic.twitter.com/drDBd8spHv

What is the lowest carb cheese?

Mozzarella cheese is keto-friendly as it is low in carbs, but it is not at the top of the list for low carb cheeses.

The majority of cheeses on the list below are considered “zero” carb since they contain less than 1 gram of carbs per 1-ounce serving.

The list is not exhaustive, but considering the most popular cheese types, the one lowest in carbs is most likely brie with 0.1 grams of carbs per 1-ounce serving. Depending on the kind of Mozzarella you choose (particularly burrata), you can also get close to 0 carbs per serving.

For your convenience, we have included a table of some of the common cheeses that are listed as keto-friendly in order of net carbs. These macros are per 1-ounce serving.

* = contain over 1 g of net carbs per 1-ounce serving. Eat in moderation.

Does low-fat Mozzarella have less carbs?

Compared to mass-produced whole milk Mozzarella, reduced or low-fat Mozzarella (usually made with 2% milk rather than whole) is slightly higher in carbs.

You can expect about 80 calories, 6 grams of fat, 7 grams of protein, and 2 grams of net carbs per serving in a low-fat Mozzarella.

It’s still a bit high compared to fresh Mozzarella but can still work in moderation as long as you aren’t pairing it with non-keto-friendly foods.

Did I cover all you wanted to know about mozzarella and if it’s keto-friendly?

Mozzarella cheese is an excellent choice for the keto diet, though some variations are better than others. You will want to stick to the fresh stuff rather than the mass-produced shredded kind.

If you are going for cheap and easy, mass-produced isn’t necessarily forbidden. You will need to be a bit more careful when balancing it with other carbs in your diet. Since the low-fat Mozzarella has more carbs than whole milk Mozzarella, you might want to steer clear of part-skim mozzarella.