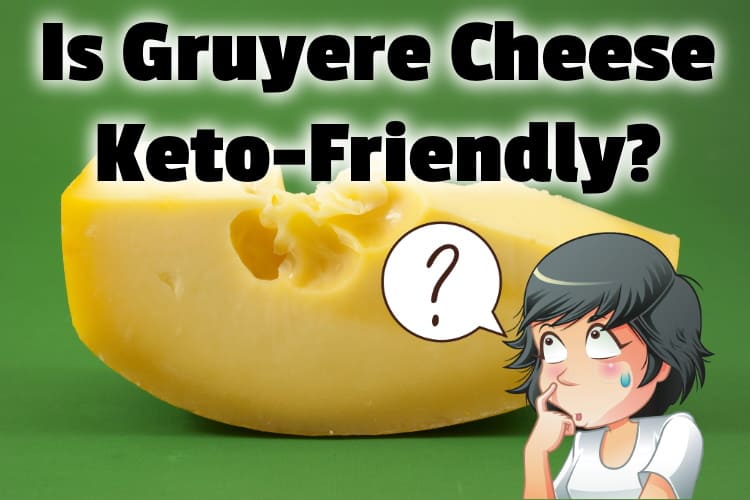 I love Gruyère cheese. But not every kind of cheese works for keto, so I’ve wondered is Gruyere cheese keto-friendly?

Here’s what I discovered from some tasty research:

Yes. Gruyère cheese is definitely keto-friendly. It’s a hard yellow cheese belonging to the Swiss family; and has almost no carbs. This aligns with the fact that the harder the cheese is, the fewer net carbs it will have.

Stick around as there is so much more to learn about this cheese while on keto.

Have a quick look at what I will cover in this article:

Let’s dive into this cheesy article.

Join the KETO 30 Guided Challenge and save up to 50% on awesome keto products!

For those of you who are looking to keto to improve your health, or just help get a sense of control over your diet, we invite you to join the next KETO 30 Guided Challenge starting soon!

CLICK HERE to learn more about the challenge and how to save up to 50% off on the awesome products over at Keto Logic!

some carbs covered in cheese in a carb bowl with extra carbs on the side pic.twitter.com/0k7egxPcoM

Does Gruyère have carbs?

While on a keto diet, the primary thing you have to watch for is your carbs.

A keto diet tends to force your body to burn fat instead of carbs. So it’s essential to watch your carb intake. It might surprise you that most cheeses don’t have a lot of carbs in them.

Remember, generally speaking, the harder the cheese the fewer carbs. For instance, cottage cheese has a lot more carbs than cheddar as just 1 example.

So how many carbs does Gruyère have?

The technical answer is that Gruyère cheese has 0.1 total net carbs. So you can say that it has 0 carbs. On top of this, gruyere melts quickly so it can be turned into a super keto-friendly cheese sauce. Gruyère cheese is also one of the few kinds of cheese that have 0 grams of carbs.

The next runner ups are manchego cheese and burrata cheese who also have 0 grams of carbs.

Some famous cheeses have more carbs, such as:

Now keto isn’t just about carbs. It has a lot to do with the fat count as well. You want high fat and low carbs. So let’s take a look at which cheese meets both of these requirements and fits our keto diet best.

Which cheese is best for a keto diet?

We talked about the carbs in cheese, but what about the fat content?

The fat level is just as important as the carbs. We’re going to consider a list of a few famous kinds of cheese you might not have heard of and compare them with the other ones. We’ll look at both the carbs, fat, and protein of all these cheese.

This list is based on one ounce of cheese:

There are two choices for the winner of being most keto-friendly.

This means the winner is Gruyère cheese! It has an overall good score on everything. Gruyère Cheese is keto-friendly, and it pairs well with a lot of dishes.

Overall all these types of cheese, except for ricotta, are excellent choices for keto and don’t feel pressured to stick to just one cheese.

Will too much Gruyère knock me out of ketosis?

The short answer is probably not. You’d have to eat a whole bunch of Gruyère to exceed the daily carb limits of the keto diet.

But, first off, let’s go over what ketosis is.

Ketosis is a metabolic state in which the body is forced to burn fat for fuel instead of carbs. Ketosis can happen in as little as three days after starting your keto diet. However, it’ll take a little longer for your body to be fully adapted to burning fat efficiently.

The signs that you’re body is in ketosis are increased energy and having a smaller appetite. The vast list of benefits for being on a keto diet is why you don’t want to be kicked from ketosis.

I already showed why ricotta wouldn’t be good for keto based on the carb count. Being kicked from ketosis because of cheese though has a lot more to it.

It’s not just because of the carbs but because of the sugar intake as well. Too much sugar is bad for being on keto. Just like the wrong kinds of yogurt can take you out of ketosis.

I have a recent article on eating yogurt on a keto diet the right way. It goes more into why sugar is terrible on keto. But I also took a surprising look at how Greek yogurt works on keto.

There are cheeses like ricotta that are high in carbs and sugar. Such as cottage cheese, which has 8 grams of carbs and .8 grams of sugar.

Remember, soft cheeses have more carbs, and it’s safe to say as long as you stick to harder cheeses, you’ll be fine on keto. Try to limit the intake of cheese to about 1 to 2 slices of cheese per meal for higher-carb cheese. Gruyère cheese is safe to eat more of though in almost any form, from melted to sold cheese.

The key to keto is moderation and watching your carb and sugar intake.

But let’s do a quick review of the net carb & fat limits for the 4 main types of keto diet:

Now it’s worth mentioning that despite what I listed above for fat, there isn’t truly a “limit” on fat in keto. It also depends on how many calories a day you are consuming. The 150 grams was based on a 2,000 calorie per day diet.

Also, know that it’s not just any kind of fat.

You should avoid trans fats altogether. Ideal sources of fats include:

What can I eat with Gruyère on keto?

Now that you know how much gruyere cheese can benefit a cheese lover on keto let’s talk about meals!

Gruyère cheese, as I said before, melts easily into a sauce. Meaning you can use it as a side to dip food into or as a topper on your main dish. Gruyère cheese is your best option when it comes to making queso for Mexican dishes.

I have a recent article on the types of Mexican food you can eat while on keto. It even goes into detail about eating at Mexican restaurants and what’s safe to eat.

Gruyère cheese can also be deliciously shredded and sprinkled on your food. If you like Gruyère, then you can cut a slice and eat it just like that. Gruyère cheese is paired perfectly with eggs (check out the recipe in the video at the end). Whether you choose to pair it as a sauce or shredded, your taste buds will thank you.

You can make it with scrambled eggs, in an omelet, in an egg bake, or even try it in frittatas.

This type of cheese might also surprise you by being delicious enough to go into mac in cheese. Just pick a keto-friendly pasta and pour that cheese right on top. Cheese lovers heaven can’t get much better than that.

I have a fantastic mac and cheese recipe later on in this article, so don’t miss out on being able to add it to your recipe book. Remember, this cheese pairs well with meats and vegetables.

This cheese can go with almost anything and everything you can think of to put cheese on. It’s a win-win for cheese lovers on keto with it being both a yummy cheese and the best cheese you can eat while on keto.

Gruyère cheese goes great with just about any meal, but I’m going to share with you a few meals that will bring out that inner cheese lover.

This mac and cheese are made with cauliflower instead of pasta while being made with a keto-friendly cheese!

The next recipe is one of my favorites, it’s easy to make, and yummy to eat.

Wondering about those keto breadcrumbs I mentioned? They do, indeed, make keto-friendly breadcrumbs! My favorite one is on Amazon for just a few bucks. Thousands of reviews and almost all are 5-star.

Just click that link to check the current price on Amazon.

I LOVE this one on Amazon from Sola! Only 2g net carbs, almost 4,000 reviews, and almost all are 5-star. So if you thought bread was gone forever, think again! They have 4 different types to choose from. Just click that link to see the choices on Amazon.

I recommend it for those on keto as it’s very similar in flavor to balsamic. But balsamic only works for 1 of the 4 types of the keto diet. So if you’ve been using balsamic vinegar (or glaze), make sure and read my recent article.

All you have to do is click the link to read it on my site.

Have I covered everything you wanted to know about eating gruyere cheese while on a keto diet?

As a cheese lover, the thought of having to give up cheese for a diet sounds like an awful idea. Being on a keto diet doesn’t mean needing to get rid of all cheese. Remember to watch out for carbs and sugar count.

We learned to stay away from cottage cheese and eat your cheese in moderation. Besides, we also deduced that Gruyere cheese is keto-friendly and pairs well with most food.

Join the KETO 30 Guided Challenge and save up to 50% on awesome keto products!

For those of you who are looking to keto to improve your health, or just help get a sense of control over your diet, we invite you to join the next KETO 30 Guided Challenge starting soon!

CLICK HERE to learn more about the challenge and how to save up to 50% off on the awesome products over at Keto Logic!

link to How to Deep Fry Chicken Wings (Frozen and Thawed)

Everyone loves chicken wings, but almost no one knows how to make them properly. Chicken wings are traditionally fried and then coated in wing sauce. Here is how long to deep fry frozen chicken...