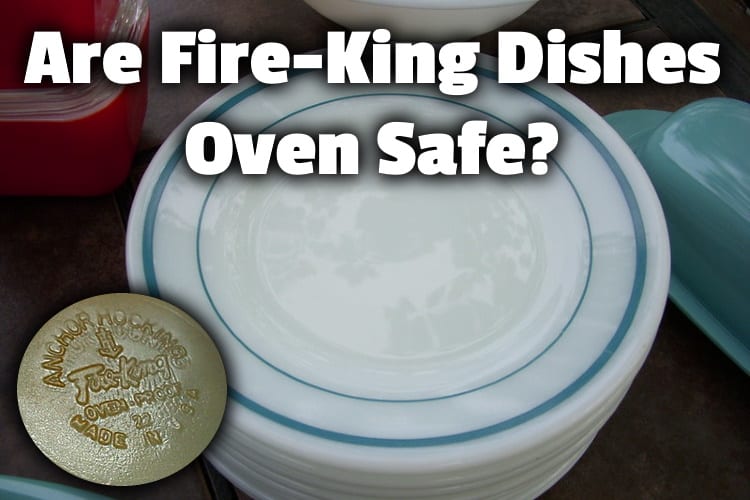 If you’re fond of vintage dishware or collectible dishes, you’ve probably heard of the Fire-King dishware brand of Anchor Hocking. They are durable and sought-after, but many new owners wonder are Fire-King dishes oven-safe?

Let me tell you what I uncovered from my research:

Yes, Fire-King products are oven-safe. Vintage Fire-King, made from low-expansion borosilicate glass, is oven-proof.  It was often labeled “heat-proof”. The current line of Fire King glassware, made of soda-lime silicate glass, is preheated oven-safe up to 425°F. None are intended for stovetop or dishwasher.

But that’s not the complete story and just a quick answer at a glance.

For instance, we’ll also get into whether you have to preheat the oven. Or, can Fire King bakeware withstand higher temperatures than their dishes? Or is it is safe to clean dishware in a dishwasher?

I am going to cover all the questions you have regarding the Fire King dishware.

Can Fire King bowls go in the oven?

Fire-King dishes are oven-safe, whether they’re marked or not. However, Fire-King is not intended for use over an open flame or on the stovetop.

Since the dishware is meant mainly for oven use, you should be cautious while using it in the microwave.

Most Fire King bowls are microwave-safe, but it’s advised not to use it in the microwave. Doing this might run the risk of hurting the integrity of the product.

You also should keep all Fire-King products out of the dishwasher. However, there is more behind using the dishwasher that I’ll talk about later in this article.

But before you go placing your Fire-King products in the oven, make sure to preheat your oven.

Do I have to preheat the oven for Fire-King bakeware?

Yes, you have to preheat your oven before placing your Fire-King bakeware in it. Glass bakeware should never be exposed to sudden temperature changes.

The reason behind this is a scientific process that creates thermal stress or thermal shock.

If you were to place your Fire King bakeware into a cold oven and turn it on, it would expose your dish to a large amount of radiant heat. But, when you preheat the oven, all the heating elements run at full blast. This radiant heat will heat up every surface at which it shines on rather than heating the air around the object.

However, its not the amount of exposure, but the duration of it. So with preheating, there is less stress on the bakeware.

When you don’t preheat the oven, your bakeware has to go under the stress of one part being heated while the rest of it is still cold—resulting in thermal stress, which can cause your bakeware to explode.

Funny enough, this is the same thing that happens with slow cookers except in reverse. Instead of the oven or, in this case, we should heat the slow cooker.

I have a recent article that talks about why you shouldn’t place frozen food into a slow cooker. When it heats up, the temperature change and thermal stress will cause a slow cooker to crack.

If you want to read more about it, click the link to read it on my site.

How hot can the oven be for Pyrex or Fire King bakeware?

Both Pyrex and Fire King bakeware can go into a preheated oven and be perfectly fine.

However, they do have a heat limit that shouldn’t be pushed. They can both stand up to 425 degrees in an oven. If you try to exceed this amount, your bakeware is under the risk of cracking or worse, exploding.

Pyrex is known for being able to withstand higher temperatures and was ready in initial days to be put on a stovetop.  However, Pyrex has become weaker due to changes in the formula of its manufacturing.

Pyrex, just like Fire-King, is prone to thermal stress.

One way to avoid this is by using a metal pan for dishes that require 425 degrees or higher. Make sure that you preheat your oven and that your food is at room temperature or, at the very least, not frozen.

Make sure you avoid using any bakeware that has any crips or cracks in them.

This can cause the dish to crack fully while in the oven. Besides, make sure that your bakeware has cooled thoroughly before putting it into the fridge. It will also help lengthen the life of your bakeware.

If you happen to have an accident at home, make sure to do a full inspection of your oven and the ground near it for glass. Never eat the food that was in the dish if it has exploded as there might be a glass particle you can’t see.

Can Fire King go under a broiler?

A broiler is usually at the top of your oven and we use it for providing direct and scorching heat to food. We commonly use it for melting cheese on top of the dishes and making our food crispy.

Although Fire-King dishes are oven safe, the direct heat from a broiler isn’t safe for glassware. Remember that Fire King can’t stand temperatures over 425 degrees. Whereas, a broiler can get up to 550 degrees, which will break your bakeware.

It’s essential that you keep your Fire-King bakeware in the middle of the oven and don’t exceed 425 degrees.

When the glass breaks, it will make a huge mess, and it will get challenging to manage the situation. Like I said before, the glass particles will spread everywhere, even at the places that you can’t see, and the explosion has the potential to break your oven.

If the glass explodes, it has the potential to break the glass door of the oven, which can be dangerous as the projectile can fly quite far away.

You’ll have to clean not only the oven but in front of it and around it. This situation can be hazardous for kids and pets in the building. To avoid this altogether, you could opt to use a dutch oven.

I have a recent article on using Corningware instead of dutch ovens. If you wish to learn about it, click the link to read it on my site.

Fire-King glassware, especially the newer bakeware, is dishwasher safe. However, just because you can do something doesn’t always mean you should do it.

Putting your bakeware in the dishwasher will take away the original luster of the dishware and strip of a thin natural glass layer. This would bring down the beauty and value of the product.

Gradually, the brand has made improvements to the dishware to make it dishwasher safe. Just remember, you will lose the value of the dishware set if you wash it too much.

Did I cover everything you want to know about Fire King being oven-safe?

Yes, all Fire King dishes are oven safe except for a few. We also talked about avoiding thermal stress on your glassware by preheating your oven. Your oven shouldn’t go over 425 degrees to help prolong the life of your bakeware.

We also discussed that we should not use the broiler on your Fire King set, and even though they’re dishwasher safe, you shouldn’t put them in the dishwasher. You have to be careful with temperatures and not overuse your dishwasher.

Hopefully, this article’s information keeps you and your family safe while using this vintage Fire King dishware set.