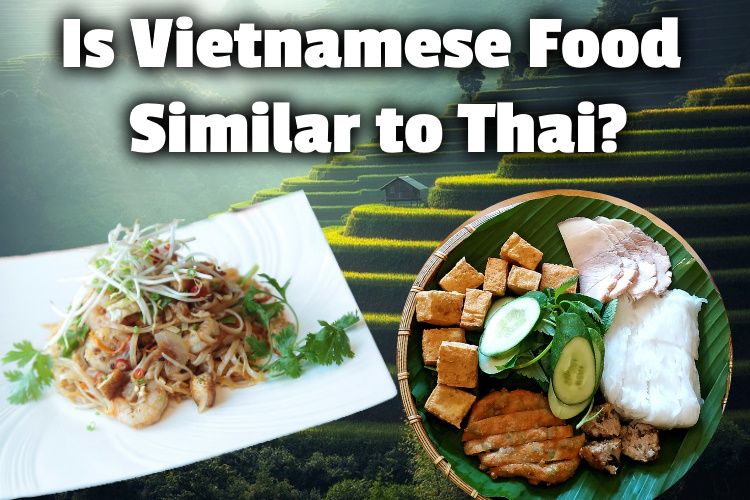 I pretty much love all types of Asian food, and while I know a great deal about each type, I have wondered specifically is Vietnamese food similar to Thai?

Here’s what I’ve learned through some tasty exploration:

Thai & Vietnamese are similar with both using rice, noodles, garlic, ginger, and fresh herbs like cilantro and basil. However, Vietnamese food is lighter and milder. The French occupation of Vietnam also brought ingredients like potatoes, asparagus, & baguettes to further accentuate the differences.

But there’s a great deal more to know about these wonderful cuisines; not only how they differ, but which is spicier. It’s also really interesting to note how both cuisines compare to Chinese food.

Is Vietnamese and Thai food the same?

All types of Asian food (Thai, Korean, Chinese, Japanese, and Vietnamese being the biggies) share certain commonalities in ingredients and flavors, such as:

Peanuts are also commonly used in both cuisines.

But for those with peanut allergies, that can be a problem. Luckily, I have a recent article, specifically about Vietnamese food, where I cover in detail everything you might want to know if you’re trying to avoid peanuts.

How did French food influence Vietnam?

In fact, the big differences between Vietnamese and Thai food come into play when you consider the French occupation of Vietnam.

France and Vietnam relations began in the 17th century.

At that time, Catholic missionaries from France went to Vietnam. Eventually, the French colonized both Vietnam and Cambodia in 1887.

France didn’t leave Vietnam until 1954 following the Geneva Accord, but they left a lasting impression on Vietnamese cuisine and are responsible for the introduction of the following in Vietnamese cooking:

Is Pho Vietnamese or Thai?

Pho is a Vietnamese noodle soup. It usually contains some sort of protein, like chicken, steak, pork or shrimp. It’s pronounced like “fuh”.

Traditional pho is made with thin rice noodles and a broth made of beef stock and a variety of spices.

There are many variations of pho, the most common being pho nam, which originates from Southern Vietnam. Pho bac, from Northern Vietnam, is considered to be the original pho.

Pho is considered the national dish of Vietnam.

Though the history of pho itself is murky, it is widely agreed that it started in the late 1880s, during the French colonization of Vietnam.

It is even thought that the word “pho” is derived from the French “feu.”

This indicates that pho could be an adaptation of the French soup “pot au feu,” a French beef stew. (source)

Over time, the Vietnamese people made the soup their own by replacing the carrots and turnips in the stew with bean sprouts, herbs, and lime juice.

This restaurant is a fashionable mashup of Fijian, Thai, Chinese and Vietnamese food: http://t.co/mLZ3Czabac pic.twitter.com/oTJnDp63gJ

Thai food is much spicier than Vietnamese food and often contains both curry paste made from ground chili peppers, but also fresh sliced chili peppers also.

The hottest food in Thailand comes west of the Mekong River in a region called Isan. Here you’ll find many variations of somtum, a green papaya salad.

Made with salted egg, dried shrimp, peanuts, and Thai bird chiles. These chilies can also be found as bar snacks served with sour sausage and dried pork. (source)

If you like the freshness of Vietnamese food, but want the spiciness of Thai, you can always add hot sauce when it gets to the table.

But there’s nothing better than making your own curry with readily-available Thai curry paste.

If you decide to purchase Thai curry paste, you may wonder whether it goes bad and how long curry paste lasts once it’s been opened. Just read this recent article to find out.

Click the link to read about how to store your opened jar of curry paste.

Alternatively, you may be interested in making your own curry paste instead of purchasing it.

What is the difference between Chinese food, Thai food, and Vietnamese food?

I expand on some of the noteworthy differences between Vietnamese and Chinese in this recent article. What really surprised me was how much healthier one is than the other.

Like Vietnamese food, Thai food often has rice noodles as a base, although rice is common too as it in with Chinese food.

If you look at the region as a whole it might make more sense. China (and Japan and Korea) are located in the east. Vietnam and Thailand, by comparison, are both in the southeast.

The most striking difference, however, is in Thai curries.

Thai curry uses a curry paste blended into a base of coconut milk to create a rich, spicy sauce. They have several different curry pastes including:

Each curry paste is different, but essentially a blend of chilies and garlic with the possible addition of lemongrass (also prominent in Vietnamese food) and shrimp paste.

Ginger is more common with China and Japan, whereas both Vietnam and Thailand prefer fresh herbs such as lemongrass, kaffir lime leaves, mint, cilantro, basil, and galangal (a root similar to ginger).

In some ways though, because all Asian countries have different regions and (in some cases) drastically different cuisines in those regions, it’s actually hard to generalize and compare.

So do what I recommend, and try ’em all!

Confused as I used to be about the differences between Thai and Indian curry?

If so, definitely check out this article I wrote which breaks down the key differences.

Did I answer all of your questions about whether Vietnamese food is similar to Thai?

In this article, we took a look into the world of Asian cuisines.

We explored ingredients, cultural similarities, and differences between the countries, and examined things like spiciness. Thai food generally contains hot peppers in its ingredients, where Vietnamese food is usually made of fresh, light, and mild ingredients.

Curry is also much more common in Thailand than it is in Vietnam.

Many curry recipes will call for the use of coconut milk. You may be tempted to purchase coconut milk in a carton.

Read this recent article on my site to find out why using coconut milk in the carton is a bad idea.

Lastly, we even discussed how the French invasion impacted the flavors of Vietnam. The French brought baguettes, and what would eventually become the national food of Vietnam, pho.

But specifically, we answered the question of how is Vietnamese food similar to Thai?

What is your favorite Asian cuisine?