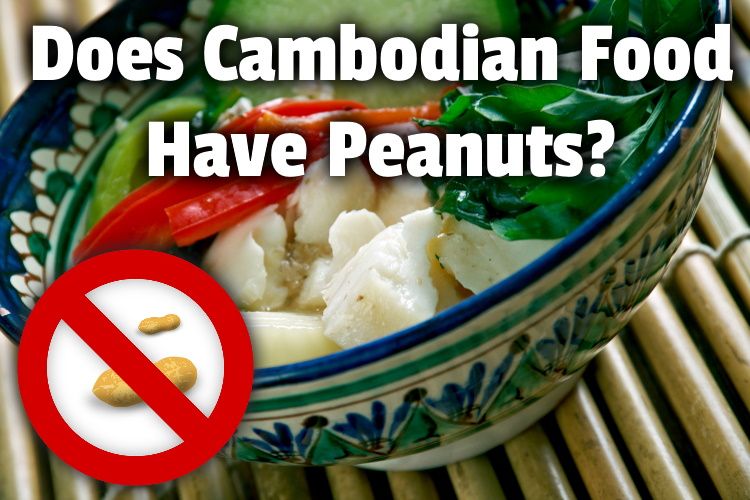 Cambodia is a neighbor to Thailand and Vietnam which do sometimes use peanut sauces. I love Cambodian food, but began to wonder does Cambodian food have peanuts?

Only a few Cambodian dishes have peanuts and usually, they are in sauces or salads and can be easily identified and avoided. Peanut oil is not typically used in Cambodia.

In many places around the country, peanut oil and many nuts are usually too expensive to use for street food vendors.

That being said, there is always a risk of cross-contamination and nuts being in food anywhere you go. Always make sure to carry an EpiPen/s at all times and be very cautious of the food you eat when traveling.

There’s more to learn about Cambodia and its food culture, so let’s dive into it.

Are their peanuts in Khmer food?

Peanuts are not commonly used in Khmer dishes. However, any Khmer dish with kroeung (food paste usually made with lemongrass) such as Char Kruger will have a higher chance of having peanuts in it.

The dishes you should watch out for are any dipping sauces or salads. These are the most likely Khmer foods that could contain nuts in them.

Not all Krueng is made with peanuts, though.

There are western restaurants that will have more food options without peanuts. These options will be more expensive, though, and there is still a chance for cross-contamination.

Some parts of Cambodia are not as well educated as other portions of Southeastern Asia.

This may mean people in restaurants there have less knowledge of allergies, EpiPens, analeptic shock, and some may not even know how to read.

I bring up reading skills because it’s common for people that travel with allergies to have info cards on their person.

These cards tend to say that they are allergic to nuts or peanuts and may die if they contact them. The writing is usually in the language of the place they are going and has pictures as back up.

This works really well in most places around the world. In Cambodia, though, things are a little different. Having these cards on you is still a good idea, but don’t expect everyone to be able to understand them.

You’ll find a few people that will understand, and you’ll have some people simply nod and say yes just to please you. The people that just say yes are trying to make sure they don’t displease you even though they might not understand the card.

Overall, if you ask many travel guides, they’ll say it’s very unlikely for peanuts to be found in the main dish, and it’s usually always in the sauce.

Cambodians in Cambodia do all typically follow a Khmer diet. However, Cambodians living elsewhere around the world have likely strayed from the Khmer diet as they have been introduced to more Western foods.

Cambodian food is known for two things: prahok, a type of fish paste, and their love for rice. There’s more to these types of meals, however.

A typical meal in Cambodia consists of:

Their desserts are based on fresh fruit and sticky rice. Common Khmer dishes involve healthy ingredients but not everyone follows along with typical food meals in most places.

Because of how they eat, they usually don’t worry about calories or fat in food in most places. Now while in Cambodia, most people will stick to this diet, though.

Their diet consists of many fruits and veggies that one might not be able to find in abundance at the regular supermarket. Overall, a Khmer diet doesn’t usually consist of peanuts, even when it comes to dessert.

As you can see, none of these have peanuts in them though you may have to watch out for the sauces and soups as sometimes peanuts can be put into them.

I have a recent article that talks about peanuts in Filipino food. It’s good to widen your range of knowledge of food and places that serve more peanuts, especially if you are traveling.

What Cambodian dishes can peanuts be found in?

When Cambodian food does contain peanuts, they are most often found in Mee Kola, Nom Banh Chok, Kari Saraman, and you sometimes see spicy roasted peanuts offered as a snack.

As I said before, there are not many Khmer dishes that contain peanuts.

Peanuts can mainly be found in dipping sauces or salads, as you can see crushed nuts in some salads. Let’s be more specific about these dishes, though.

Let’s examine the dishes I just listed in greater detail so you know what to look for and possibly how to have them modified to exclude peanuts:

Mee Kola: This is a rice stick noodle cooked in soy sauce. Vegetables, bean sprouts, papaya cucumber pickles, herbs, and crushed peanuts are added to this meal. It even has boiled eggs added to it. Think of a styled ramen bowl with less broth and peanuts on top.

Nom Banh Chok: This dish can be made with or without peanuts, so if you find a place that doesn’t use peanuts, I would definitely recommend this dish. It’s usually a breakfast dish that contains rice noodles with fish gravy and raw veggies. Some vegetables customarily added to this are cucumbers, water lily stems, basil, banana blossom, and oftentimes mint.

Kari Saraman: This is basically beef tamarind & roasted peanut curry. There’s really no avoiding peanuts in this one.

Spicy Roasted Peanuts: This one is exactly how it sounds: roasted peanuts with chilies.

These are just a few names you should avoid or be very careful of if you have a food allergy. Also, carry medical equipment on your person but don’t let your allergy stop you from traveling.

Traveling the world and experiencing new things is a fantastic part of life. Just because you have an allergy doesn’t mean you have to give up living life.

If you’re interested in traveling more and being aware of peanut allergies, check out my recent article about peanuts in Japanese food. Like most Asian countries, there aren’t a ton of peanuts used in Japan, but there is 1 dish we’ve all eaten I was surprised often contains peanuts.

What is Kreung in Cambodian food, and does it contain peanuts?

Like I mentioned above, Cambodian people tend to eat fish paste with rice. Many of their dishes tend to have some type of paste or sauce with them.

After you have cut up all your ingredients into medium-small dice, you’re going to place them in a blender.

Blend everything until it turns into a thick paste. This is good to freeze and use later or to use right away.

This paste can be used with chicken, in soups, and many other dishes. Spices and herbs are more commonly used in Southeast Asia.

Cambodia is known for having bland dishes that can be spiced up well with pastes, herbs, and spices.

But do they use peanut oil at all?

Do they use peanut oil in Cambodian food?

So ultimately, this depends on the area you’re in.

And this is true even in Camboia. If you are closer to the border, you’ll find more dishes with peanut oil and peanuts in them. This is due to Thai food.

While Cambodian dishes are similar to Thai and Vietnamese food, they tend to have less chili and less sugar. Their similarity is more on because of how much rice they all eat.

But as I said, most of these places won’t use peanut oil because of how expensive it is.

Most Cambodia eats fish paste with rice, so peanut oil might not be one of the first things that come to mind when preparing a meal. If you eat at a fancy restaurant, you are more likely to see more peanut oil.

Did I cover everything you wanted to know about peanuts in Cambodian food?

In this article, we went over the dishes to avoid while in Cambodia. We found out that there aren’t many dishes that have peanuts in them.

While their diet consists of fish, rice, and noodles, there is the occasional peanut.

However, you won’t find peanut oil and peanuts in most dishes unless you’re on the border. This is because food culture becomes mixed. Overall though, make sure you don’t leave your safety in the hands of strangers.

Your allergy cards can be useful, but they might not always be understood. Always have an EpiPen on your person and travel with someone you trust. While not everyone can travel with a person, it’s still a good idea if you can.

Having someone you know that you can trust to use the EpiPen right and understand your reactions is extremely helpful when traveling.

Cambodia is known for heavy traffic at rush hour, and they don’t have ambulances in certain areas. If you go into shock, you have to drive yourself to the nearest hospital for treatment, and you do not want traffic to be the reason you pass on.

Always be safe when traveling and do more research if you have allergies of any kind. Stay safe, and enjoy eating.