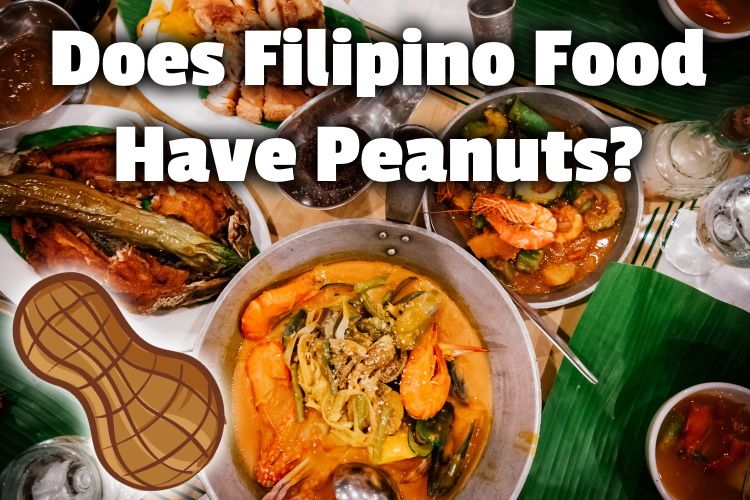 Filipino food might be on your list of unique foods to try. From breakfast to dessert, you’re bound to find a yummy dish in this cuisine you’ve never seen before. However, you may be wondering – does Filipino food have peanuts?

However, there’s a lot more to know about Filipino food.

Like what are the dishes that may have nuts in them or the street food you must avoid. As a bonus, I’ll also share some Filipino food that is completely safe for those with peanut allergies.

Let’s dive into eating Filipino food with a peanut allergy.

Does Filipino food use peanuts?

Yes, some Filipino food does have peanuts. But, the vast majority of its food does not.

You’ll find peanuts in desserts and pastries the most. Also, make sure you avoid cakes and ice cream as this is where peanuts are the most common ingredient.

But there are a few savory foods that contain peanuts too.

Adobong Mani is a prevalent street food that is made out of fried peanuts with garlic. Another food you must avoid is Kare-Kare, which is a stew made with peanut sauce.

At the same time, not all street foods have peanuts.

For example, Pancit is one of the street foods, which is kind of like pork and noodles and safe for peanut-allergic people.

Does Filipino food use peanut oil?

Peanut oil is relatively high in price. So it’s not used in the majority of Filipino food.

Instead of peanut oil, they use coconut or corn oil. This reminds me of a lot of Greek food, where olive oil is used primarily. Greeks don’t use peanut oil for the same reason.

Similarly, most restaurants won’t use peanut oil, and most recipes won’t call for it.

However, to ensure you stay safe while traveling and trying new foods, try making an info card/emergency card.

This card will usually have information about your allergies and what nuts you are allergic to. It’s good to have a picture of the nuts as well, so there is absolutely no room for any doubt.

It may not be a perfect translation, but if you carry a card in the Philippians or at Filipino restaurants where English is not spoken, this should get the message across:

That loosely translates to “I have a peanut allergy and cannot eat anything made with peanuts or cooked in peanut oil”.

Can someone with a peanut allergy eat food cooked in peanut oil?

For a majority of people with peanut allergies, refined oil is reasonably safe.

The number of people that react to refined peanut oil is very few. That’s because the refining and filtering process typically removes the proteins in peanut oil that typically leads to allergic reactions (source).

The difference between the two is that refined peanut oil goes through more cleaning. It goes through a process that swifts the raw crude oil, so all the harsh and toxic elements are out of it. Thus, leaving behind a clear, light, and order free oil.

Unrefined oil is probably exactly how you think it is.

There is no filtering, so the oil is not odorless. This oil is preserved in its natural state once taken out of the nut. This also means it is authentic in taste, color, and smell.

Now that being said, even if you do have a reaction, it will typically be very mild.

However, if someone fries a piece of food that was made with or contains peanuts then fries something without peanuts, it can still cause a peanut allergy.

Of course, only you and your doctor should make any decision, diagnosis, or assessment of what you should or shouldn’t eat if you have a peanut allergy.

Unrefined peanut oil is a different story, though, as it is bad for anyone with a peanut allergy.

It contains most of the original ingredients from the peanuts. The oil itself might not be harmful to you, but the food previously cooked in it might be.

Always make sure to ask at restaurants what oil they use. Stay away from unrefined peanut oil and make sure the cooks take your allergy seriously even when they use refined oil.

For more information from our sources, read Anaphylaxis Campaign and KMP.

We loved this cake when we were in the Philippines! San Rival Recipe | A Filipino Cashew Meringue Layer Cake:https://t.co/Zz1N4xDZsU#sanrival #cake #foodie #Philippines #recipe pic.twitter.com/pPiyx0B0se

What nuts are most common in Filipino food?

The following three nuts that are found in Filipino food.

Remember that peanuts are mainly found in desserts. However, finding them in the main meals in a restaurant is slightly uncommon. I also mentioned that you’d find nuts in ice cream and cake.

One cake that is often made is called Sans Rival, and it’s’s mainly made with cashews. The recipe for this cake is pretty simple.

It actually reminds me of a cool Vietnamese cake called Snowball Cakes, which is made with roasted peanuts and coconut.

Also, I have a recent article on peanut in Vietnamese food. It talks about what to avoid and how peanuts are.

Click on the link to read the article on my site.

What is the most famous food in the Philippines?

There are many famous dishes in the Philippines.

We’ll go over a small list of food that is very popular in the Philippines other than the dishes I already mentioned.

Let’s start this list off with the well known Filipino food dish.

These were just a few of the famous foods made in the Philippines. As you can see, most of them don’t contain nuts.

Just remember to stay away from street food, and you’ll have a great time trying Filipino food.

So did I answer your question does Filipino food have peanuts?

Don’t let a peanut allergy stop you from enjoying life. Yes, it means you have to take a few more precautions than most, but the world is adapting.

As you’ve seen in this article, many places, such as the Philippines and Greece, don’t use peanut oil. They also only really have peanuts in desserts like cakes.

In this article, you learned what type of nuts are most commonly used in Filipino food apart from peanuts and what foods to avoid. You also learned that peanut oil, when refined, is reasonably safe for people with peanut allergies.

Remember to keep an info card on your person explaining your allergy, so you’re never in a position where you and the cook are not on the same page.

Stay safe, and enjoy some food!