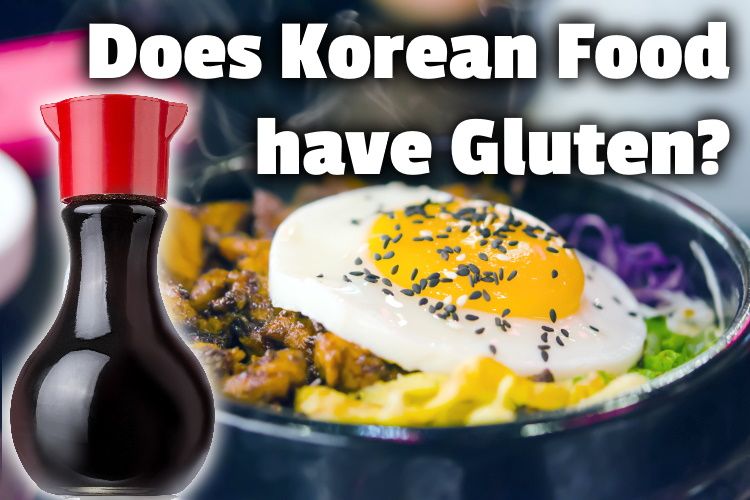 A lot of East Asian cultures don’t cater to food restrictions as readily as we do in America. And for those looking to avoid gluten, it, unfortunately, appears in most Asian soy sauces. But does Korean food have gluten?

Does Korean food have gluten? Generally, most Korean food does not have wheat or gluten directly. However, many dishes, such as bibimbap, dumplings, and marinated meats use soy sauce, which typically contains gluten. In restaurants, ask for no soy sauce. At home, you can substitute wheat-free soy sauce.

But that’s not all.

You must also be aware of how to order Korean food and ensure that it is gluten-free. Don’t worry. I have shared all you need to know in this article.

I’ll also list out what dishes you must and must never order from the Korean cuisine. Additionally, I’ll also mention alternates to the gluten ingredients in Korean food.

Keep reading to get all the information.

🎉Attention #Sriracha lovers 🎉 This recipe for Korean Chicken Wing Sauce is the bee’s knees. Tip: use #tamari sauce in place of soy sauce, to have yourself a #gluten-free #flavor #feast! 👩‍🍳 https://t.co/iKlbC5J52p pic.twitter.com/NFjkDH8joh

Koreans don’t use soy sauce as often as Japanese or Chinese people do in their cooking.

Yet that doesn’t mean it’s never used. Especially if you come across a dish with an ingredient that ends in “jang,” you can pretty much assume that it’s some variation of soy sauce.

Soy sauce is made by fermenting soy and wheat together for several days.

This creates a salty brine and produces the flavor we recognize so well in soy sauce. No matter which country a particular type of soy sauce originates from, you can count on it being made pretty much the same.

Because of the ingredients used, you can see that traditional soy sauce is not suitable for a gluten-free lifestyle.

However, there are a few variations for you to consider if you want a similar flavor without the gluten. You just need to ask if these substitutions are available.

Does kimchi have gluten?

With kimchi being a popular ingredient in Korean dishes, it’s understandable that you would want to ask if it’s gluten-free.

But first, what is kimchi exactly?

Kimchi is a staple in Korean households. It can vary a little in composition, but in most cases, it involves pickling a combination of vegetables, garlic, ginger, chili peppers, salt, and fish sauce.

The most commonly used vegetable is Napa cabbage. However, you can sometimes find carrots, radish, cucumber, and scallions as well.

Traditionally, the kimchi mix is placed in a clay pot and kept underground to ferment for months.

Instead of taking all this time to make your own kimchi, you can buy it premade from the store. You can actually find it in most supermarkets, including Walmart. Just be careful with the store-bought stuff since it tends to be higher in sodium.

Most would describe kimchi as an additive to many Korean dishes.

Because of its complex flavor – being a mix of sweet, sour, and spicy – it is often used to add flavor and texture to bland foods, like rice, noodles, or even baked potatoes. Some may also use it to add flair to their eggs or adorn a sandwich.

However, that doesn’t mean there aren’t gluten-free variations available. You just need to know what to look for on the menu, ask your server about, and ingredients to avoid.

The main thing you will likely need to stay away from is any type of meat. Most places will season their meat with red pepper paste (gochujang), soy sauce (ganjang), or fermented soybean paste (doenjang).

As we talked about earlier, basically all soy sauce variations – anything with “jang” in the name – will contain some wheat. So it is best to just avoid meat on your bibimbap.

Now, that doesn’t necessarily mean you are automatically safe with a vegetarian option.

You’ll need to ask your server if the vegetables have been dipped or marinated in some form of soy sauce. You will also need to ask for your bowl without gochujang, as this is a staple in bibimbap.

Vietnamese cuisine is a bit easier to enjoy when you are allergic to gluten.

They tend to use fresher ingredients with dipping sauces in their spring rolls (made with rice wrappers) rather than seasoning the filling with soy sauce.

You can read more about how Vietnamese food differs from Chinese food in this recent article.

Do Korean dumplings have gluten?

Yes is the short answer.

Most dumplings are not gluten-free.

The fillings are usually flavored with some sort of soy sauce, among other things. But the wrappers are almost always made from wheat as well.

Both of these things make dumplings difficult to enjoy when you are allergic to gluten.

In just about every East Asian cuisine, you will find some form of dumplings.

You can find the dim sum in China, gyoza in Japan, and mandu in Korea. These dumplings are usually super flavorful and full of deliciously fresh ingredients, containing a mixture of vegetables and meat.

Korean mandu dumplings are very versatile. They are available with a variety of different fillings, and they can be cooked in many different ways.

Here are some of the variations you may find on a Korean menu:

Egg rolls and spring rolls in both cultures are very similar to dumplings as well. Even if you have a rice wrapper on your spring roll, the filling may be seasoned with soy sauce.

If you really want to make your own gluten-free fried dumplings at home, you could try them with a little twist.

Instead of the traditional wheat wrappers, use corn masa instead, which you can read more about in a recent article.

It will change the flavor a bit (making it more of an empanada and can only be eaten fried (not boiled or steamed), but it’s worth a try if you would like.

#Bulgogi. #Glutenfree and #vegan #Korean food for dinner (and my lips are tingling). #GoVegan pic.twitter.com/NnUPhhxbiA

How to order Korean food gluten-free

There are some gluten-free options available in Korean cuisine.

You just need to know how to order and what to look for. Here are a few simple things to ask about when ordering your gluten-free Korean food :

If you don’t want to go through the trouble of a custom order, try these Korean dishes:

Hopefully, this answers all of your questions about whether Korean food is gluten-free

It can be difficult to eat gluten-free in Asian countries, particularly in China, Japan, and Korea. Many dishes contain some sort of wheat.

It may be in the noodles or dumpling wrappers. Wheat is also the main ingredient in soy sauce.

When it comes to Korean cuisine, you may not be able to eat some of the staple foods, like dumplings and bibimbap, as they contain wheat. Besides, you will need to be wary of hidden soy sauce in other dishes. However, there are plenty of gluten-free options you can enjoy in Korean cuisine.

Feel free to eat all the kimchi you want!