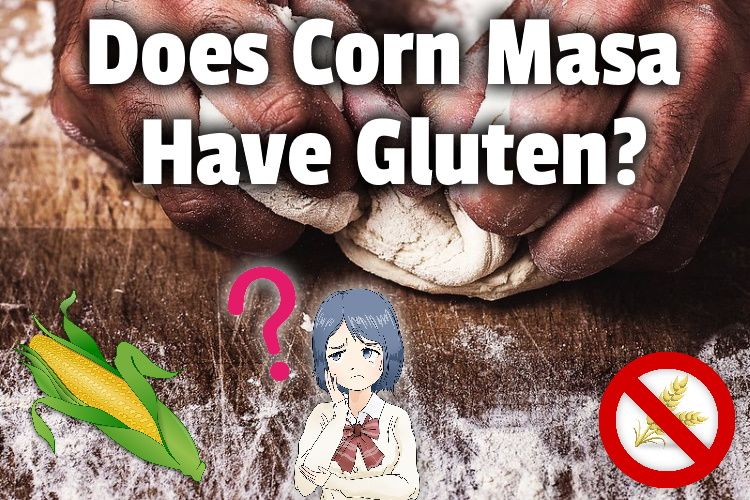 I love tortillas and tamales, which are traditionally made from corn masa. But with a daughter who eats gluten-free, I’ve wondered does corn masa have gluten?

Here’s what I discovered after looking into it:

Corn masa does not contain gluten. However, not all brands of masa harina are certified gluten-free. This makes them subject to possible cross-contamination with wheat and gluten.

But it’s not quite that simple.

While most corn masa would traditionally be gluten-free, not all corn tortillas or products made from corn masa are gluten-free. And some brands don’t care about cross-contamination and may not label their products clearly.

So let’s dig in a little and look a little more closely.

tamales ━ prepared corn masa that is filled with fillings and wrapped in corn husks or banana leaves before being steamed. we make this around holiday season. pic.twitter.com/7o27uOqVCF

What is gluten and what products have it?

Have you recently been diagnosed with celiac disease?

Perhaps your child has a gluten sensitivity, and this is a whole new world for you? Or maybe you just have an upcoming dinner guest follows a gluten-free diet, and you aren’t sure what they can eat.

You’ve come to the right spot as we’re breaking it all down and answering all the top questions.

Gluten is a mixture of proteins found in:

Regardless of what brought you here, let’s clear up a few misconceptions about what makes a product truly gluten-free and why you have to be concerned with gluten contamination or cross-contamination.

Corn, which is actually a grass, is rich in fiber and aids in digestion. And it’s naturally gluten-free.

What is corn masa?

Corn masa is a dough made from a specific kind of corn flour called masa harina, and when the corn is ground to make masa harina, it is soaked in a calcium hydroxide mix, known as limewater (not the citrus fruit).

Masa harina means “dough flour” and is the cornflour that makes masa dough. And masa harina is different from cornmeal, as cornmeal isn’t soaked in limewater.

So, masa harina has a very similar look, texture, and feel to wheat flour. By comparison, cornmeal is much grainier and still bears the same yellow color as corn.

By soaking the ground corn in the calcium hydroxide mix, masa harina has added niacin and calcium. That also changes the flavor and makes the corn easier to digest. That is also a plus for someone who is suffering from celiac or gluten sensitivity.

Masa harina is purchased in dried form and more often than not, simply mixed with water to make masa dough.

The other big difference compared to cornmeal or grits, aside from texture, is that corn masa is typically whole grain, meaning the whole kernel of corn gets used. That also makes it more nutritious.

Cornmeal and some brands of corn flour often have the endosperm, bran, and germ stripped away. The difference is basically the same as between white wheat flour and whole wheat flour.

Again, masa harina should be naturally gluten-free, but I would still recommend purchasing masa harina that is strictly labeled “gluten-free”, such as Maseca.

tamales ━ prepared corn masa that is filled with fillings and wrapped in corn husks or banana leaves before being steamed. we make this around holiday season. pic.twitter.com/7o27uOqVCF

At no point is gluten added or naturally occurring in any corn masa product. But while corn masa and other corn products do not contain gluten naturally but may be contaminated during processing if the company also manufactures wheat products.

Corn masa is a corn-based dough that is used to make tortillas, tamales, and a variety of Mexican and other Latin American dishes.

The dough is made by combining masa harina flour with water for tortillas. For tamales, the flour is typically mixed with lard or shortening, along with water or broth, and a little baking powder.

If you’re following a strict gluten-free diet, you should also buy a certified gluten-free corn masa to ensure that no gluten is present.

It never hurts to go organic either! If you are lucky enough to have a Latin American, Mexican or specialty market in your town, corn masa can be purchased fresh.

A well-known brand of masa harina corn flour is Maseca, which is certified gluten-free.

If you’re like a lot of Americans, you probably have a bag of Maseca in your pantry right now but don’t use it very often.

If that’s you, you may also wonder whether corn masa expires or how long it stays fresh for. Luckily, I cover that in a recent article I wrote about masa and how long it takes to spoil.

If you have an old bag in your pantry, make sure to click that link to read that on my site.

in this house, we only back the blue when its blue corn masa pic.twitter.com/mC56iLQydS

Maseca, as I mentioned above is certified gluten-free.

Since it’s also the most readily available one, that’s the one I buy and probably the one you should get too. Some other well-known brands that are certified gluten-free include:

Steer clear of Bob’s Red Mill brand which states on the label that cross-contamination can be present.

Other brands, such as Gold Mine and Quaker don’t state anything one way or the other but are best avoided if you’re being strict about it.

I cracked out my tortilla press to make fresh tortillas for these black bean and corn tacos. I used cumin, chilli powder,diced chillies, and lime juice to season the filling. They were tasty plain, but toppings are a taco requirement for me. #castlevaultcooking @TheCastleVault pic.twitter.com/1JQaEyCcRR

As a general rule, corn tortillas are naturally gluten-free but cross-contamination can occur with manufacturers who also manufacture flour tortillas or other wheat products. And some tortilla brands also intentionally mix corn and wheat flour together, but it will be labeled accordingly.

Tortillas, for those of you who aren’t in Texas or Mexico, are very thin, wrap-like flatbread that can be made with just about any kind of flour, but are most often made with wheat or corn flour, salt, fat, and water.

It is best to purchase corn tortillas that are labeled as certified gluten-free.

Thankfully, they are fairly easy to find at most major grocery stores. In fact, corn tortillas made by the well-known brand, Mission, are all certified gluten-free.

Mission even has an organic option. That’s the best way to go with Mission as many of their products have hydrogenated oils, aluminum, and bleached flour, and you would not find those in organic products.

Other brands that are certified gluten-free, that may be slightly harder to come by, but can be found in most health food and specialty stores are:

Of course, there’s no better corn tortilla than a freshly made one. Otherwise, they can be pretty leathery. Plus, if you make it yourself, you know exactly what’s in it.

Conveniently, I wrote this ultimate guide on how to use a tortilla press step by step in one of my recent articles.

Just click that link to see it on my site. You’ll see just how quick and easy it can be to have homemade tortillas whenever you want them.

Beef Tamales: I tried making the corn masa using olive oil instead of lard!!! I can’t tell the difference. pic.twitter.com/vgk6PnHEDU

Do you get the picture yet?

Read, read, read those labels!! A tamale is a traditional Mexican dish, made of corn masa dough, that can be stuffed with a variety of different spiced meats, cheeses or vegetables and is steamed in a corn husk.

The corn husk, as we all know here in Texas, is not meant to be eaten and is discarded once on the plate.

Or if you’re buying packaged tamales, check the label.

You can buy certified gluten-free tamales, such as premade Tuscan Tamales, which makes a huge variety of tamales from Red Chili Beef to Green Chile Chicken and Jalapeno & Cheese to Black Bean & Cheese.

Or how about Texas Tamale Company.

They sell beef, pork, and chicken spiced tamales. You can even find tamales in most major grocer’s freezer sections.

Again, if you are feeling adventurous you could be everyone’s favorite dinner host/guest and learn the new skill of making your own tamales!

Did I cover all you wanted to know about corn masa and whether it is gluten-free?

Corn is a very healthy, very versatile ingredient. That’s especially true when you find a minimally processed one and one that is either organic or at least GMO-free.

I do suggest buying corn that is GMO-free and organic when possible. If you suffer from celiac disease or have a gluten sensitivity, it is wise to purchase corn products from a manufacturer who does not process any gluten products on the same equipment or in their facility at all.

Those will be clearly labeled as gluten-free on the front of the label.

Obviously, corn can be delicious when consumed on its own. It is also a popular ingredient in cereal and eaten like popcorn or polenta. Corn is used in making cornstarch, hominy, and grits.

But it is also made into masa and masa harina corn flour in many Mexican and Latin American dishes.

Corn is a naturally gluten-free ingredient. But the way that the manufacturers process corn does not always mean that the final product is, in fact, gluten-free.

Many times, gluten-filled grains will cross paths with the corn either in the field or on the conveyor belt leading to cross-contamination or gluten contamination.

Like any food allergy or sensitivity, when following a gluten-free diet, it is important to read labels and know where your corn and other ingredients are grown and processed.

link to Masa Harina vs Corn Flour - Are They the Same?

Continue Reading
link to Does Corn Masa Expire? (What you need to know!)

I love fresh corn masa and always have a bag of Masa Harina in my pantry. But I don't make corn masa very often, so I began to wonder does corn masa expire? I decided to investigate and here's...