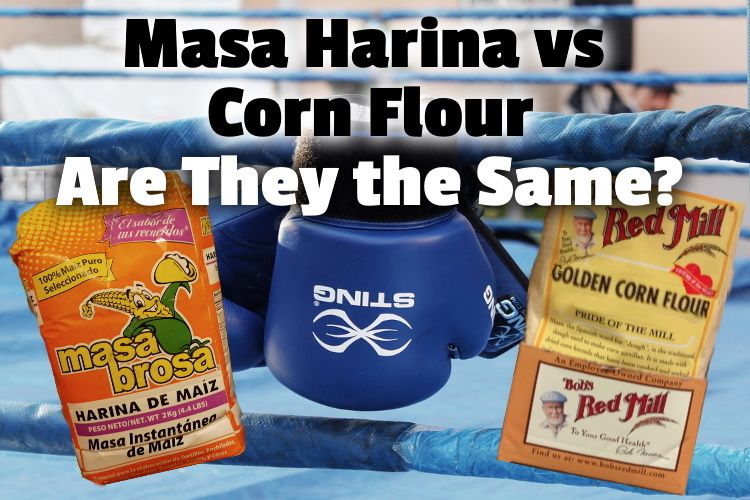 I did some digging and here’s what I found out:

While Masa harina and cornflour look similar, they are completely different products. Generally, cornflour is just finely ground corn. Masa harina, on the other hand, is ground corn treated with alkali. While corn flour is fine for breading and frying foods, it won’t work at all if you’re making tortillas.

They sure look similar. So, are they the same thing? What is the difference between masa harina and cornflour? Can they be used interchangeably?

Are corn flour and masa harina the same thing?

Corn flour is a type of flour that is milled from dried whole corn kernels. It is very fine with a smooth texture.

Corn flour gives structure to baked goods and is often used with a binder like eggs. Just like white or wheat flour, it doesn’t taste very good raw.  It is delicious when cooking with it, whether it’s baking, frying, or grilling.

Corn flour is extremely versatile and can be used in recipes for bread, muffins, battered and fried foods, and much more. (source)

Corn flour, however, is not a replacement for all-purpose white flour. In many cases, it can be mixed with whole wheat flour to make noodles or bread. But you may not want to use it to bake cakes unless you have an affinity for that corn flavor.

Experiment with corn flour in small batches until you find a flavor you like.

Masa harina is a staple flour used in Mexican cooking. It literally translates to “dough flour.” Like corn flour, it has a fine, smooth texture and is made from dried whole corn kernels.

The primary, and most important difference, is that masa harina is cooked in limewater. Limewater is a solution made with calcium hydroxide, not the green citrus fruit.

The calcium hydroxide completely changes the chemical makeup of the corn flour by infusing it with calcium and niacin. This makes it easier for the body to digest and gives it a very distinct flavor. (source)

Masa harina is naturally gluten-free. In fact, gluten is never added or occurring in any corn masa product.

Another common question is whether or not corn masa or masa harina contain gluten.

Luckily, I did the research for you and came up with some slightly surprising answers! Check out this recent article to learn more if you’re worried about gluten.

My corn masa is made from Masa Harina, corn flour–100% organic, Non-gmo. I’m lucky to afford it, want to grow it #nongmoCorn pic.twitter.com/NlEjMGKY8o

Can you substitute corn flour for masa harina?

Masa harina is the traditional flour used for corn tortillas, tamales, and other Mexican dishes. It has different properties than cornmeal or corn flour. The difference is that masa harina is cooked with an alkaline solution, usually limewater.

The process of cooking corn in an alkaline solution is called nixtamalization.

This alkaline solution changes the flavor and aroma of the final product. It also increases the nutritional value and removes the hulls from the kernels. Additionally, the process softens the corn, making it easier to grind into the dough.

If you are making tortillas, you must use masa harina.

What happens if you try to substitute corn flour? You will end up with a tortilla that either won’t stay together or will be rubbery if it does stick together.

If you are making tortillas, you might also want to look into purchasing a tortilla press.

While you can make tortillas without a press, it’s much easier to make large batches of tortillas by using a press. It’s also a lot harder in my experience to get tortillas flat enough if you’re just using a rolling pin.

Read more about how to use a tortilla press in this recent article. What really surprised me was how much easier it is to make flour tortillas than corn. But there is 1 ninja trick you must know if you love fresh corn tortillas as I do!

Yep. Most corn meal is augmented with wheat flour. Only a few brands are gluten free. pic.twitter.com/FuvlM5pAbt

Is cornmeal the same as corn flour?

While they are both made from milled, dried corn, they have completely different textures.

Cornmeal is much coarser and feels very gritty. It is the main ingredient of any good cornbread recipe. It may also be called polenta and is very much like grits.

Corn flour is finely ground and smooth in texture. Corn flour is made from grinding cornmeal into a fine powder. It is commonly used in baking or coating foods for frying.

The primary difference between cornmeal and corn flour is texture.

While in some contexts, like breading chicken, they are interchangeable, you will get different results from a texture standpoint. Generally, you should use whatever product is called for in a recipe.

For example, corn muffins and cornbread are normally made with cornmeal. If made with corn flour, they would be much denser and would not have the same texture in your mouth. Think more cake-like than cornbread.

Essentially corn flour is made from cornmeal. So, if you have cornmeal on hand, you can grind it until it’s superfine like flour.

we made tamales (with blue corn masa harina) and they came out sooooo gooooood omgggg pic.twitter.com/kezOGvyqUr

How do you make masa harina?

The calcium hydroxide needs to be added to the whole corn kernel before it’s processed into cornmeal or flour.

However, it can be made from scratch, but it is certainly a labor of love. It is typically made from dent corn, which is yellow field corn. This is NOT the sweet, delicious corn that you enjoy at summer barbeques.

Dent corn has a thick outer skin that can be cooked for hours and still not get soft. It is also not readily available for purchasing.

Because dent corn can be hard to come by, the next best thing is whole grain corn by Great River Organic Milling (click to see the current price on Amazon).

Fair warning – it’s a 25-pound bag of corn! You’ll be able to make more tortillas than you can shake a stick at!

The good news is that dried corn, when stored in warm temperatures and kept dry, will last a year or more. Just keep it sealed tight to keep the bugs out.

This step is crucial. It’s what makes masa harina masa harina. It can be purchased from Amazon and the best one to get is Mrs. Wages Pickling Lime (click to see the current price on Amazon, but it’s cheap!).

Bring the corn to a boil in a water and calcium hydroxide mixture and then let it simmer until the outer skin of the kernels slips off.

Remove the corn from the heat, cover it, and let it sit overnight.

After rinsing it several times, you’ll process it in a food processor until it combines into a thick dough.

Now you have masa harina! For a more in-depth, step-by-step process, I found an excellent recipe on this website.

While it is a labor of love, it’s not too difficult, and the results will be superior to masa harina you purchase at the grocery.

Did I answer all of your questions about Masa harina and Cornflour?

In this article, we took a look at masa harina and corn flour.

Masa harina is a staple in Mexican cooking. It’s a dried dough used to make fresh tortillas and other delicious Mexican dishes.

We explored the differences between the two and whether they can be used interchangeably. We also looked at how to make masa harina from scratch. Because the kernels must be treated with calcium hydroxide before they are ground, it can’t be made from cornmeal or corn flour. But the results will be worth it!

While corn flour is an excellent gluten-free coating for fried foods, masa harina should be used for making tortillas.

Once you’ve made you masa harina, you can also make masa, which is the prepared dough. It will only last about 3 days in the refrigerator, but it should be kept at room temperature if you are making tortillas.

To read more about masa, how long it lasts, how to know when it’s gone bad, and how to extend the shelf life, check out this recent article.

Photos which require attribution and were modified by me: