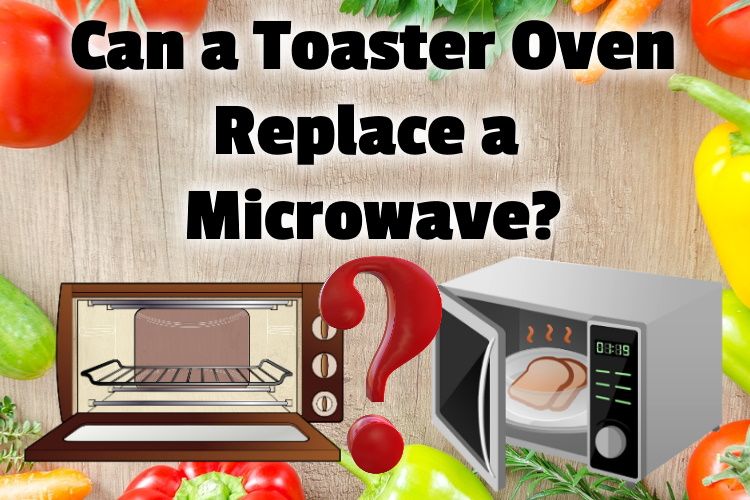 A toaster oven cooks with a heating element, browning, and crisping the food. A microwave, however, heats water molecules through electromagnetic waves. Ultimately both work differently and produce different results. A toaster oven can replace a microwave, but what you gain in food quality, you lose in convenience.

But there’s more to know about the similarities and the differences between a microwave and a toaster oven. And there is such a thing as a microwave/toaster oven combo.

So in this article, we’re diving deep into appliance-land and looking at each one. We talk about what things work well in each and what uses you should steer clear of in each.

Ultimately, we answering the question can a toaster oven replace a microwave?

What is the difference between a microwave oven and oven toaster?

Toaster ovens are just like a miniature version of your big oven.

They have a door that typically opens down with a handle. There is a heating element that heats up that radiates heat out to whatever is inside the toaster oven.

A microwave, by comparison, uses electromagnetic waves that heat up the molecules in whatever water is present in the food. This is the primary reason that microwaves heat food much faster than toaster ovens.

That is also the reason that the plate or container you heat the food on in a microwave doesn’t get nearly as hot as it would in a toaster oven. And of course, some containers (such as paper or plastic) should never go in a toaster oven since they could either melt or catch fire.

Some foods naturally heat better in a toaster oven and other times the microwave works much better.

Here’s a handy chart showing the different uses and which device works better for that style of heating:

Can I use a toaster oven like a microwave?

As I mentioned above, both devices are kind of different.

A microwave works by heating up water molecules so that naturally tends to soften foods while getting them hot. What else makes you think of hot water? That’s right. Boiling and steaming.

So since a toaster oven uses direct heat, it tends to dry and crisp foods as opposed to keeping the moisture in. So we have to keep all of that in mind when using a regular microwave or toaster oven.

The best ways to use a toaster oven like you would a microwave would be:

One of the worst things about traditional toaster ovens is the clean-up.

After all, while you can stick a bowl of water in a microwave and turn it on to create steam to soften the grime, a toaster oven bakes on the grime. And since we’re sticking our food in the toaster oven, harsh chemical cleaners don’t seem quite right.

In a recent article, I break down just how easy it is to clean a toaster oven with baking soda.

What really surprised me was just how effortless grease and burned on cheese comes up with just a little bit of work. Just click the link to read it on my site.

Can you warm up food in a toaster oven?

Yes is the short answer, just expect it to take a lot longer than a microwave.

Also, as we got into above, you have to pay attention to the type of container you’re using as plastic and paper in a toaster oven are out.

For glass, ceramic, or pottery, ideally, make sure it says “oven-safe” on it somewhere. After all, the toaster oven is just an oven shrunk down.

Next, realize that when you do reheat food in a toaster oven that you’ll want to transfer the food to a plate or bowl after it’s done. While many of us eat off the same plate we heated in a microwave, coming out of a toaster oven, that plate will be much hotter; too hot to touch with bare hands.

Lastly, if your toaster oven has an adjustable tray, lower it so it’s further away from the heating element.

What I often find if I don’t do that, is that the top of the food gets black and burns but the center of the food is still cold (if it had been in the refrigerator).

One common question people have, especially with limited counter space, is whether or not it’s safe to put a toaster oven in a wood cabinet like you might a microwave. Even if your cabinet doesn’t have a door, this can still be tricky since most brands radiate a lot of heat.

In a recent article, I break down the do’s and don’t’s of this including mentioning the 1 type of toaster oven that does work for that situation. Just click the link to read it on my site.

Can you pop microwave popcorn in a toaster oven?

Not in the paper bag!

A toaster oven heats by heating up a metal heating element that’s often on the roof of the inside of the toaster oven. Sometimes it’s on the bottom and some have both.

In either case, if paper gets anywhere near those, it could easily catch on fire. In the immortal words of Frankenstein’s monster, “fire bad!”

Now, popcorn kernels only need a heat source to pop. That’s why in the old days, your grandparents simply heated the kernels in some oil in a pot on the stovetop.

Popcorn kernels pop at about 450° F, according to The Popcorn Board (yes, there is such a thing!). So right out of the gate we know we need to set the temp that high on our toaster oven.

If I did not have a microwave or a stove and was desperate for popcorn (and didn’t want to just buy a bag ready to eat), here’s what I would do with my toaster oven:

Should I get a microwave or toaster oven?

Really if you have room and the budget you should get both.

If I had to pick one, it would depend on what my top goal was:

If convenience was my top concern, there’s no question I would get a microwave. You can reheat a plate of leftovers that came out of the refrigerator inside of 2-3 minutes.

That would easily take you 15-20 minutes in a toaster oven.

But for the ultimate in food quality for items you are baking or reheating, there’s almost no debate; a toaster oven will give you better results. It tends to heat more evenly and foods get crispy. Crispy food in a microwave is almost impossible.

But the choice would also depend on what types of items you most often heat or reheat.

For instance, a college student may do a lot of microwave popcorn and heating up restaurant leftovers. In that case, the microwave is the clear choice.

But the parent of young kids may cook a lot of frozen waffles or pancakes for their kid’s breakfast while trying to get them off to school. The toaster oven is the clear winner there.

So think about your needs, your goals, and your food preferences if you feel you can only get 1 or the other.

Is there such a thing as a microwave toaster oven combo?

Yes, is the short answer.

However, they don’t combine the heating element from traditional toaster ovens and the electromagnetic waves from a microwave.

Instead, they use double infrared light which cooks about 40% faster than a traditional toaster oven. Like a microwave, most brands have the following features:

Then like a toaster oven, most of the brands offer these features:

There are 2 I like more than any other and both are from Panasonic who pioneered this technology.

I’m mentioning 2 because one is more like a microwave that also happens to have what they call a FlashXpress Broiler function for browning, grilling, and crisping. It’s also as big as a full-sized microwave, so that’s important if counter space is limited.

To check out this one, just CLICK HERE to see the current price on Amazon.

The other is more like a toaster oven that has the speed and convenience of a microwave. And like most toaster ovens, it’s relatively small and lightweight. That’s important if you typically are cooking or reheating for multiple people as it may not have the capacity you want.

The Panasonic FlashXpress Toaster Oven is not on Prime but does have near 5-stars and while this model is new, all the previous models had thousands of 4 and 5-star reviews on Amazon. It’s a less expensive choice too since it’s smaller.

To check out this one, just CLICK HERE to see the current price on Amazon.

Did I cover everything you wanted to know about whether a toaster oven can replace a microwave?

In this article, we took a look at both microwaves and toaster ovens.

We examined how they are similar and how they differ. Then we looked at some of the things that work well in one, which you’d definitely want to steer clear of when using the other.

But in the end, we answered the question of can a toaster oven replace a microwave, with a pretty definitive “not really”.

link to Does Herbal Tea Expire? (No, so here's how to know if it's bad)

It seems like everything you can purchase at your local supermarket has some sort of expiration date, include your favorite herbal teas. But does herbal tea expire? I decided to check it out...

Continue Reading
link to Does Indian Pickle Go Bad? (Not quickly, but here's how to know)

Indian pickle, also known as achar, has been a part of Indian culture and history for 4,000 years. But for those of you, like me, that have an old jar in the pantry or refrigerator, you've...