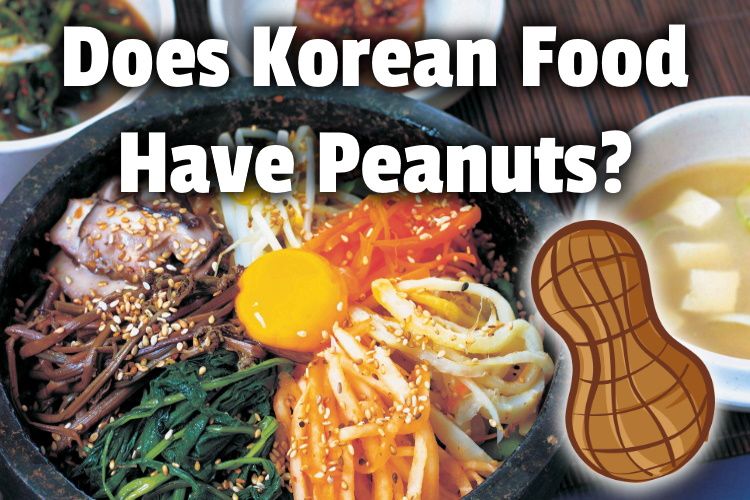 Korean food is known for BBQ, grilled meats, and tangy sauces. But while it’s not known for peanut dishes, I have wondered does Korean food have peanuts?

Here’s what I know from doing some tasty exploration:

Peanuts are almost never used in cooking Korean food. However, some Korean restaurants do use imported peanut sauces. You may also find peanuts in some desserts, but overall, peanuts are not commonly used in most Korean cuisine.

But there’s more to learn about this!

So in this article, we’re going to go over Korean food as a whole and how to identify if peanut sauces are being used. But we’ll also look at peanut oil, and which desserts might have peanuts.

Are nuts used in Korean food?

Most Korean food doesn’t have or use peanuts in it. If they are present, it’s in a sauce or used as a garnish, especially in desserts/bakeries. Fried products should be stayed away from as the oil they use can be contaminated.

Peanut allergies are not common with Koreans, so they may not be familiar with how severe an allergy can be.

This usually isn’t a problem, though, if you can communicate that you are allergic to all nuts and ask for no nuts in the food given to you. The main issue you might run into is that waiters might not know if peanuts are contained in their sauces for dishes.

Generally speaking, though, if you stay away from sauces and desserts while visiting, you’ll probably never run into a peanut problem.

It’s always best to keep an info card on your person alongside your EpiPen.

Here is something to write on a card to convey your allergy. It’s best to have pictures as well.

I have a severe nut allergy. If I eat it, I can die. Am I able to eat this food?

Even if you may not die, the restaurant people will take it very seriously and try their best to make sure you don’t come into contact with peanuts.

You should be perfectly okay in Korea to eat most foods, though.

Does kimchi have nuts?

Most kimchi doesn’t contain peanuts or other nuts unless it’s used as a garnish. However, there are recipes that involve fermented cabbage and peanuts or pine nuts mixed with red pepper, although this would not typically be called kimchi or be served at Korean restaurants.

But from my research, there is a wide variety of what can go into kimchi.

The word kimchi means salting vegetables and is very fitting for the traditional version of kimchi. Traditionally, kimchi is made with salted and fermented vegetables, often being cabbage mixed with a paste made of ginger, garlic, chili powder, red pepper, and sugar. This paste is what gives kimchi its spicy flavor.

It also has a fish sauce to provide it with tanginess.

You can also exchange the cabbage kimchi for radish kimchi. It’s less spicy kimchi made with radish stalks floating in a tangy soap.

Let’s see a few other types of kimchi.

These are all more taking a look into, and there are more versions than just this.

Remember, not all kimchi is made equal, so some kimchi may have peanuts or nuts in it, while others don’t have a trace of it. Be picky and careful when ordering this dish.

Of course in the US, it’s not uncommon to find restaurants that combine different Asian cuisines.

I also have a recent article about peanuts in Vietnamese food. So if you see Vietnamese items on the menu with Korean food, you’ll want to review my article as that will increase the chances of cross-contamination.

Always love the challenge of veganising one of our classic dishes. This duck kang jung uses plant-based duck coated in a spicy Korean peanut sauce. It’s indistinguishable from the real thing! #EthicalHour pic.twitter.com/cfOBRp5iDo

Does Korean Fried Chicken have nuts?

While the chicken used in Korean fried chicken is safe, it’s best to stay away from fried products due to cross-contamination in the oil used to fry the chicken. And sometimes chicken dishes can be covered with puffed rice, sesame seeds, or nuts.

In some places, you might be able to enjoy this delicious meal without the peanuts, but for the most part, you should stay clear of it to be on the safe side.

Luckily, I get into all the details in this recent article about gluten-free food in Korea and Korean restaurants here in the US. I even cover how to be certain the soy sauce used is wheat-free.

But if you just can’t live without Korean fried chicken, we’ve got you covered with a killer recipe that’s peanut-free!

Here’s how to make Korean Fried Chicken at home with no peanuts:

For the chicken, all you’re going to need is:

After you have all this ready, you’re going to heat your oil to 275 degrees.

Put all the ingredients for the chicken in a bowl except for the cornstarch.

Carefully add the wings to your oil and cook for about 18 minutes.

Take these out and let them rest for a moment while you turn the oil up to 400 degrees to deep fry the chicken wings in. Once you place the wings back in, you’re going to cook them for about 8 minutes.

To make the sauce, you are going to take a medium saucepan and add butter to it.

Place the ginger, garlic, and dried chilis into the saucepan and cook for about 2 minutes. Add in ketchup, vinegar, soy sauce, and gochujang until it bubbles.

At this point, you want to stir in the sweets such as honey and brown sugar until it thickens.

Now we mix the wings and the sauce together. Don’t forget to toss your wings to make sure they are fully coated with the sauce.

Now you can choose to garnish the wings with onions and sesame seeds.

Do they use peanut sauce in Korean food?

When peanuts are used, it’s made from leftover marinade from raw beef, peanut butter, and water. This is really only used to help waste of good marinade that has come in contact with raw meat. The word peanut will be used when it’s made with peanut butter.

Most often, ssamjang is made with:

This version is used more often than the peanut ssamjang. Korea doesn’t have a vast history with peanuts, but they have a long history with spicy food.

Do they use peanut oil in Korean BBQ?

Most Korean restaurants in the US don’t use peanut oil, and peanut oil is also not commonly used in Korea. Olive oil or sesame oil are the oils most used in Korean food.

There is the possibility of cross-contamination like in most places, but for the most part, you won’t see peanuts here unless it’s used in a sauce.

Peanut oil is used even less so. There is a lot of variety in oils today, but Koreans do have their preference.

Before 2005 Korea was very fond of using olive oil. Today you see them use sesame seed oil a lot, especially when it comes to BBQ.

This isn’t the only oil they use, though, and it widely depends on prices, healthiness, and preference. Peanuts are not huge in Korean culture, and it doesn’t make much sense for them to overuse peanut oil or to use this type of oil in general.

Instead, they love to use:

Every family is different, and not all restaurants follow Korean standards, though. Meaning you can come across peanuts and peanut oil in a restaurant in the US, whether it’s for BBQ or not.

Just because it’s not common doesn’t mean it’s a zero percent chance of it happening.

And as I mentioned above, restaurants in the US that blend different Asian cuisines are more likely to use peanuts. Japanese food in particular needs extra scrutiny if you’re trying to avoid peanuts.

I have a recent article that talks about peanuts being in Japanese food, including the 1 dish that’s almost guaranteed to use them.

Did I cover everything you wanted to know about peanuts in Korean food?

Peanuts aren’t big in Korea, so I would recommend starting here if you want to travel. Like always, though, make sure you have your medical equipment on your person and info cards.

It is always better to be safe than sorry in these situations. Peanut oil is even more rare to come by due to its price and overall lack of use.

Korea doesn’t cook much with peanuts, and it’s mainly used as a garnish or in desserts/pastries. Just keep an eye out for this and stay away from fried food because of cross-contamination.

I have a similar recent article that dives deep into the food from Cambodia and whether peanuts are common in that food too.

I love Greek food! From dolmas to spanakopita to grilled meats and other favorites; it's all delicious. But for those with a peanut allergy, it's common to wonder does Greek food have...

Continue Reading
link to Does Vietnamese Food Have Peanuts?

Vietnamese cuisine is delicious and is considered one of the healthiest cuisines in the world. But, what if you have a peanut allergy? If so, you've probably wondered does Vietnamese food have...