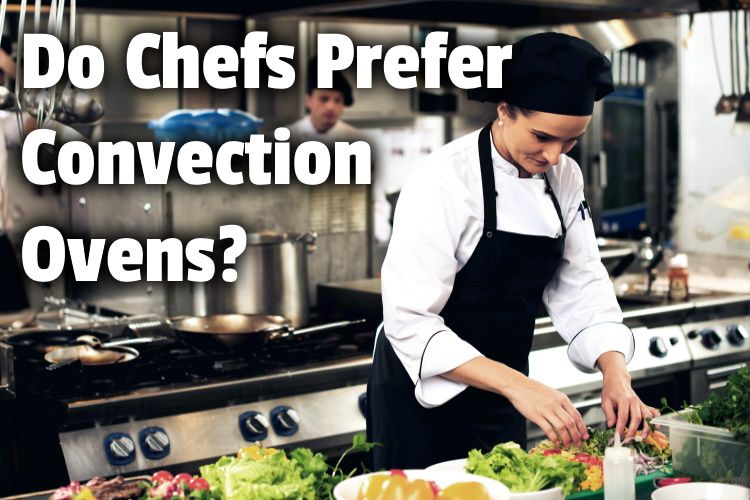 Chefs all around the world have their own personal preference on the ovens they use. Most like gas over electric. But what about convection ovens where a fan is used to push heated air around the oven? Do chefs prefer convection ovens?

I decided to find out and here’s what I learned:

Most professional chefs enjoy using a convection oven, but it depends on the meal they are cooking. Convection ovens cook food faster and more evenly, but they don’t work well for everything. So they may have multiple ovens or a convection oven where the fan can be switched on or off.

We’ll go more in-depth on why conventions are a great appliance to have in your kitchen.

We’ll take a look into what a few famous chefs think, and we’ll go over exactly how a convection oven works, so you have an easier time using one.

Do restaurant kitchens have convection ovens?

A good majority of restaurants will have a convection oven in them. Convection ovens work best for roasting meats and vegetables. But they do not work well for many baking techniques. So it’s not uncommon to either find multiple ovens where some are convection or ones where the fan can be switched on or off.

So, if baking is the primary goal for a restaurant, they aren’t likely going to have a convection oven.

This is because a convection oven loses heat faster when the door is opened and closed. However, convection ovens are perfect for restaurants that cook a lot of meat and smaller items.

This is due to a few reasons. A convection oven will heat food more evenly and quicker. Meaning the chef can get your food out to you faster while still making sure the food quality is perfect.

Cake Boss and Rachel Ray have their own opinions on convection ovens, especially when it comes to baking. They believe it’s not really worth it to use convection when baking. This is mainly due to the fact that you have to pay attention to the space around your food.

Cake Boss says, “I prefer simple baking, put it on bake, put it in the middle, and just let it bake.” This is why it’s so important to understand what you are cooking or baking.

Here’s a super easy and awesome recipe for Honey Harissa Roasted Eggplant from this past weekend! Thanks to Chef Saba, she tested it using our @subzerowolf Convection Oven. Check out her recipe by clicking this link: https://t.co/jXrKL6U7lg#delicious pic.twitter.com/sklHVh1nmZ

If you ask a professional chef which they prefer, you might find that they will choose gas over electric. This is because, with a gas oven, you can control the temperature easier and have a quicker response time, much like cooking on a grill rather than a stovetop.

But much like you’ll find in most of this article, it depends on the chef and what they are cooking. It can also depend on how old the chef is. This question can even depend on what you’re more willing to spend money on.

Not to mention that it’s normally easier to cook with a more variety of cookware. Meaning if your cookware doesn’t have a perfectly flat bottom, you don’t have to worry.

On top of all this, you’ll find it easier to clean and maintain than an electric oven.

While gas is a great option, not everyone likes to pay for it and can find it to be an extra hassle with most appliances going electric. As of right now, though, gas is still the winner of most chefs’ hearts.

I have a recent article that talks about whether or not gas ovens have fans in them. This way, you can see if a gas oven is a good fit for your home.

A great day yesterday at the grand opening of the #SoVa Food Hub & Makers Market in South Hill. Their resident chef shows off this convection oven to BJ Fulcher, RBS Specialist who made possible their commercial kitchen with RBDG funding! Lots of partners involved!! Yum Yum!!! pic.twitter.com/G99RWCTx8o

How does a convection oven work?

A convection oven uses a fan located in front of a 3rd heating element. The fan pushes heated air around the oven creating a more even cooking process. With the built-in fan, you don’t have to worry about rotating, but you have to make sure there’s enough space for the air to move.

Generally speaking, food cooks about 25% faster when in a convection oven. However, in order to get this faster and more even cooking means that there needs to be more space and a fan to circulate the air.

It might be confusing when you should use your convection oven, so here are a few tips.

Use your convection oven when:

Don’t use your convection oven when:

This is because the fan can create a lopsided dish when the fan is blowing on foods that start as batter.

Convection ovens are better than regular ovens for toasting, dehydrating, or roasting meats or vegetables. Convection ovens save more energy and cook food faster. They are not better, however, for baking cakes or bread, or delicate items such as soufflés.

So, whether they’re better than any other type of oven depends on the person and what they’re trying to cook or bake.

When you are baking or cooking in the kitchen, you realize a lot goes into making a meal. You could simply cook rice in a pot and hope it comes out perfectly, or you could use a rice cooker. Yes, it means you’ll have another appliance in your kitchen, but it will help make food faster and better and mean fewer dishes for you.

I believe that’s everyone’s goal when adding a new appliance to their kitchen. Ovens are the same way.

However, just like with coffee, you may like a Keurig for one type of coffee and an actual coffee pot for another. Funny enough, Keurig came out with a design that includes both. Now, that’s for another time.

You might even like it for baking cookies. Then you have to consider maybe you like baking in a regular oven and cooking in a convection oven. It’s very dependent on how you bake and cook and what method you prefer.

This is much like how some people prefer using a blender for a food processor’s job and vice versa. However, if you are big on baking and you want to save energy and time, then I would definitely pick a convection oven over a normal one any day.

Remember to do your research on brands and products, so they best fit you and your family’s needs.

I’m not best pic taker but the chef at @subzerowolf making some scrumptious gourmet using a steam convection oven!!! pic.twitter.com/neooDNsN6r

Does Gordon Ramsay use a convection oven?

Gordon Ramsay has a Rorgue cooker in his home which features, among other things, 3 ovens, one of which features an inverted airflow system which is basically the same as convection cooking. His ovens are both gas and electric.

Now you might be thinking that they aren’t the same thing. An air fryer is a smaller version of a convection oven. So they’re technically not the exact same thing. With an air fryer, you’ll need to remember that it’s best if you are using it to feed one to two people. Any more than that, and you’ll need to do more than one batch.

Even when they are, you have to pay attention to how much food you are putting into it. This is because, in order for the fan to cook the food thoroughly, you need space around the food.

Aside from size and design, an air fry is a smaller and more portable convection oven.

This makes it a perfect small appliance in your kitchen that is perfect, especially if you just bought an apartment or home. I have another recent article that goes into other small appliances that will fit perfectly into your new home.

Did I cover everything you wanted to know about convection ovens?

In this article, we went over quite a few things.

Convection ovens are wonderful appliances that do have their drawbacks here and there. You either love them or hate them.

Overall though, we learned that some chefs do prefer using convection ovens. They’re great for even heating and reheating food, and we talked about when and when not to use your convection oven. Do forget that they cook faster and save you more energy, what’s not to love?

Remember to be safe and enjoy cooking!

Continue Reading
link to Can I Leave Food in a Slow Cooker Overnight on Warm?