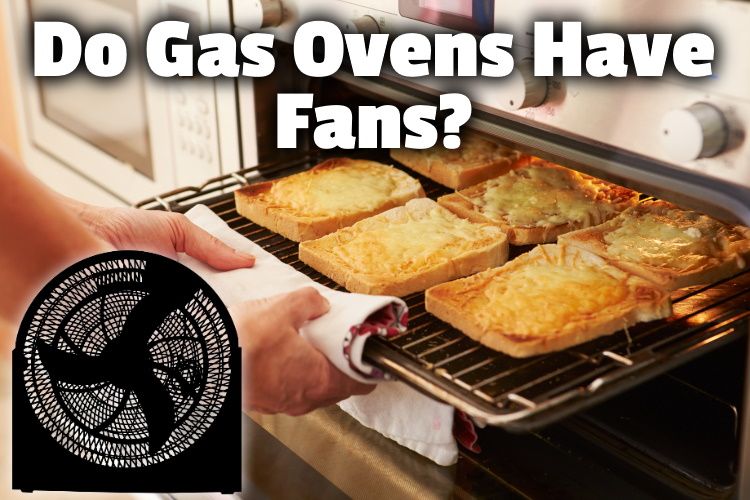 Most chefs prefer gas ovens, and we also hear a lot about convection ovens which use a fan to circulate the warm air, speeding up the cooking time and consistency of cooking. But do gas ovens have fans?

Not all gas ovens have fans. Both gas and electric ranges can be fan-assisted or have no fan. But a true convection oven would typically be electric. And the gas ranges labeled convection use an electric heating element behind the fan.

But that’s just a quick snapshot of how and when fans are inside of ovens, whether gas or electric.

There’s a lot to uncover about gas ovens with fans, and how they differ from convection ovens. So let’s just dive right into it.

I’m in the middle of filming a 90’s rap video and it happens to look like the inside of a fan assisted oven. pic.twitter.com/4d3VTlFVhY

Do all ovens have fans?

No, all ovens do not have fans in them. Convection ovens are the most widely known type of oven with a fan where the fan is in front of a 3rd heating element at the back of the oven. But there are also fan-assisted ovens where the fan simply blows the warm air around the inside of the oven.

A convection oven is simply an oven with a fan.

This means the air being blown is heated air, as opposed to a fan just moving the warm air around inside the oven. Fan-assisted ovens don’t have fans directly behind a heating element. There is simply a fan inside which moves the air around.

You can find fan-assisted ovens in both gas and electric models. Be due to the nature of gas, you don’t typically find a true convection oven that is also gas-powered.

When you do see a gas range labeled as a convection oven, that means there is an electric heating element behind the fan.

Most chefs prefer gas ovens due to being able to control the temperature and results of the food better.

Many chefs debate on whether convection ovens actually cook food fast or if it just cooks the outside quicker. However, chefs like Gordon Ramsay and Jamie Oliver use both gas ovens and convection ovens.

But most of us won’t have the room in our kitchen for 2 ovens.

Jamie Oliver says it’s best to use a convection oven during the holidays when cooking for many people. That’s where it’s handy to have one where you can turn the fan on or off.

Choosing which oven is best for you and your family depends on what you cook. Many (but not all) ovens that have a fan tend to have the option of when to use it.

Meaning, you can cook food normally and only use the fan when needed.

When should you use a fan in a gas oven?

The best time to use a fan in a gas oven is during Thanksgiving, Christmas, or large family gatherings for that perfect turkey or ham. Convection and fan-assisted gas ovens are not recommended for things that need to rise, like a soufflé or cakes.

You get the best of both worlds by using gas and using a fan to evenly cook your food. You’ll want to use your gas convection oven to roast and bake certain goods such as cookies and pies.

As I mentioned above, you shouldn’t use your gas fan-assisted or convection oven for most wet baking. That means cakes and custards.

A fan is also not great for bread making.

The reason for this is because the fan will make the batter uneven and give you messed up results. However, anything that is covered, such as hams, should always be used with the fan.

Many models by Whirlpool & Frigidaire have the option to turn the fan off in their convection models.

Other ranges, however, like the Samsung Flex Duo, are convection only. Any oven that says convection only, or fan-assisted only, will not have a way to turn the fan off. So you lose that flexibility, which is not ideal for most of us.

Not a bad result to come out this basic non fan assisted oven…gonna have it cold.. pic.twitter.com/KHhVOdml88

What is the difference between a fan oven and a fan assisted oven?

The main difference is where the fan is located and how the fans help heat. In a normal convection oven, the fan is behind a 3rd heating element on the back wall. A fan-assisted oven has a fan at the back of the oven but without an additional heating element.

A convection oven heats more like a blanket. The air is heated just before hitting the fan, so the warm air comes out and assists the heating elements at the top and bottom of the range.

A fan-assisted oven circulates the air around the oven for more thorough heating. But it’s not pushing air that was just heated. It’s simply moving the already warm air around.

Traditional ovens don’t have fans at all. The simple heat up space with no movement at all.

Now, this doesn’t make either type of oven better than the other. You need to take into consideration what works best with what you’re cooking.

If you’re looking to save energy, you might consider a convection oven. Convection ovens can shorten cook times due to their increased efficiency.

But they are usually more expensive to purchase.

If you’re looking to bake, you might want to look at a traditional gas oven. Many baked goods don’t do well with convection or even fan-assisted ovens. So if you do get one, make sure it has the option to turn the fan off.

But an oven is just one of the many must-have items when you’re putting together your dream kitchen.

I have a recent article that talks about the best appliances every kitchen needs and what is likely to gather dust and be a complete waste of money.

Which of these is “fan assisted oven”? The one it’s on, or the one before it? pic.twitter.com/XcbxpIeYId

How much do you reduce the temperature for a fan oven?

For convection or fan-assisted oven, you should lower the temperature by 50 degrees Fahrenheit. But always check the recipe and oven manual as different foods may require different adjustments.

You might be thinking, “Why would I need to change the temperature of the oven?”

A convection oven or a fan assisted oven moves the heat around and cooks food more evenly. However, this also means that food cooks quicker in these types of ovens.

You need to lower the oven’s temperature to compensate for the oven cooking the food faster; otherwise, your food will burn.

This helps the time it takes for your food to cook and for the oven to heat up, which means no more long prep time before you can even start cooking.

This also means your cooking times will vary.

Usually, about 10 minutes in time, though, it’s different for every dish you are cooking, alongside what type of oven you have.

Now fans in ovens aren’t the only way technology can assist in heating foods.

And if your budget or counter space is limited, I have a recent article discussing whether or not a toaster oven can replace a microwave.

And I even get into a combo that does both! Just click the link to read it on my site.

Can you add a fan to a gas oven?

No. There is not an easy way to add a fan to an existing oven, gas or electric, that was not designed for a fan. Even if you didn’t want it to be convection, adding a fan would require cutting the back of the oven, mounting the fan, and wiring it for electricity.

Most of us just don’t have the technical skill to do that safely or accurately.

After all, if the hole you cut wasn’t exactly the right size, it could allow heat to escape. And you would have to ensure you bought an oven-proof fan to avoid it melting or catching on fire.

Even though you can’t add any additional fans to your convection oven or a fan to a gas oven, there are some tips to help your food cook better:

So to be clear, a gas oven (or electric) can have a fan, but it has to come from the manufacturer like that. Adding any more fans or adding fans to a normal gas oven is a no go.

Did I cover everything you wanted to know about gas ovens?

In this article, we covered a lot about gas ovens and fans in ovens.

You found out the exact difference between ovens and why it’s essential to lower the temperature of a fan oven while cooking.

Not all gas ovens have fans, but they cook food faster and evenly when they do. Remember that gas ovens and electric ovens can be fan assisted or convection. But a gas convection oven will use an electric heating element behind the fan.

And I recommend only buying one where you can turn the fan on or off. Be safe, and enjoy cooking.

link to Do Air Fryers Use Radiation? (No, but there are other issues)

There's been lots of hype about air fryers lately. They make food crispy with less oil, cook food fast and are really easy to use. But many people are still skeptical about their safety. So do air...

Continue Reading
link to Does Japanese Food Have Peanuts? (Not usually, but . . . )

While Japanese food is often associated with sushi, it is much more diverse than that. But what if you have a peanut allergy? If so, you’re probably wondering - does Japanese food have...