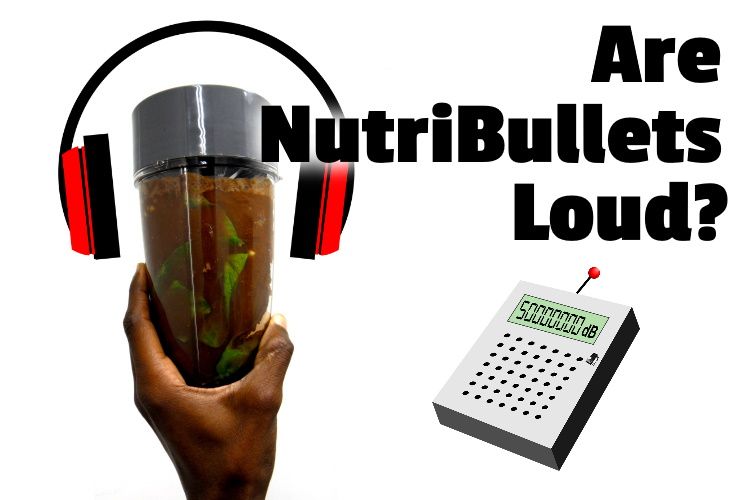 We know that the best blenders have the most powerful motors. But sometimes all that power, while needed, gets really loud. So in trying to pick my next blender, I wondered, are Nutribullets loud?

Here’s what I discovered from looking into it:

But sometimes the noise is caused by a burned-out motor. So not all Nutribullets are deafening right out of the box. So in this article, we’ll explore all sides of the question.

So let’s figure out how to quiet this appliance so the kids can sleep in peace.

How noisy is the NutriBullet?

A Nutribullet is between 91 and 97 decibels under normal operating conditions. The range is based on different designs and blade styles of the NutriBullet. A regular blender will, on average, run at 88 decibels.

But let’s put this in the perspective of decibels.

A typical conversation is around 60 decibels, while a whisper is at 30 decibels. 150 decibels is enough to burst your eardrums, and anything around 200 is considered enough to kill you.

Now that you know the low and high side, let’s use something we all hear on a day to day basis. A car at 25 feet away going 65 miles per hour is around 77 decibels.

This is pretty loud even for blenders, considering the quietest Ninja blender runs at about 69 decibels.

The Ninja blender runs just a little louder than a conversation. The NutriBullet runs louder than a car. Remember, you can dampen this sound a little with towels and move it away from walls, but that’s still pretty loud.

But some Ninja blenders can be extremely loud too!

I have a recent article that details exactly how loud a Ninja blender is. And I even get into the 1 trick to cut the volume significantly.

No idea what she is drinking
It involved a loud blender and a Niagara Falls, NY glass
*cheers* pic.twitter.com/TB2LkN9CCg

How can I make my NutriBullet quieter?

You can make a NutriBullet quieter by using a towel or silicone mat underneath it, making sure it is not close to walls or corners where the sound can reflect and amplify, or by buying or building an enclosure as you see on the blenders in coffee shops.

As I said, one of the main noise problems comes from stress on the motor.

This happens when you don’t put enough water or liquid into your mixer. This is mainly an issue when you don’t chop up your fruit or veggies and leave the larger pieces.

When you don’t put enough water into the mix, the blades have a hard time catching the food and cause the motor to overwork itself. To fix this, you simply need to add more water to your mixtures.

The loud noise isn’t just from stress on the motor, though. You have to remember that blenders are chopping up your food at high speeds. The motor, in general, is going to be loud. The blades cutting the food are going to be loud.

For one, you can make your smoothies the night beforehand. This way, you have no fear of waking anyone up in the morning, including your neighbors!

Let’s get into details on some of the solutions I mentioned above:

This helps dampen the noise from the motor coming from the bottom of the blender and into your countertops.

This can get pricey, but they work really well! The noise level goes down dramatically after putting the case over it.

The noise is going to reverberate off of the walls and right back at you. If you have an island or a bar area, place the blender there. This works well when you also add the towel trick to it.

These are all methods you can use to make your NutriBullet quieter. Try a combination or just use one and see how it works out for you. If nothing else, you can always try putting a box over it!

My parents said my blender was loud and annoying so they sent me outdoors. pic.twitter.com/CgSCZupz3B

Why are blenders so noisy?

Blenders are noisy because its blades move at high speeds, and the motor housing is typically poorly insulated. But certain foods or ice can make a blender even louder.

Why are these things so loud, you may ask?

However, it’s not just the noise of the motor, the blades, and the food. It’s the fact that that noise then bounces off of the walls near it and the countertop under it.

This makes it seem a lot louder than it actually is.

Not only this, but a lot of the noise isn’t contained in the actual container. It comes from the base where the motor is. That’s why using an enclosed case around the blender helps with the noise level.

Even though this isn’t great for family situations or most situations in general, there are ways around it and ways to make it bearable.

You can always go for a blender that is built to be quiet; however, it’ll cost you more.

Speaking of costing more, I have a recent article that goes over Blendtec’s brand and whether they’re loud or not. If you’re still considering a professional-grade blender but might want something quieter than the NutriBullet, make sure and check out my article.

Click the link to read it on my site.

Begging for morning smoothies but apparently the #nutribullet is too loud. Happy Friday everyone! by farmhouselinen pic.twitter.com/65hMiieIRn

Will a NutriBullet replacement blade make it quieter?

A sharper blade on a blender will cut food and ice more easily. So while it won’t likely alter the decibel level more than 1-2 dBs, it will reduce the total blending time.

This has been tested out when NutriBullet came out with a new design that featured a unique blade design as well. Funny enough, it brought the sound down to the same level as the original NutriBullet.

As mentioned earlier, the only way to make your blender quiet is to follow the advice I gave above. That’s to use a towel, move your blender away from the wall, and use a sound enclosure if need be.

The blade makes noise, but the motor causes the most noise out of the entire blender.

That and the pulsing of food being pulverized make the noise you hear from your blender, so changing the blade won’t do much, but it will help.

It would help if you also changed your blades periodically in the case of rust or the blades coming loose. You can prevent rust from happening longer if you regularly wash your blender and the blades.

I still jump a little at how loud the #nutribullet is…. First day trying out #juiceplus courtesy of Big Den McAul… pic.twitter.com/Y5jtugfgCH

Which is the best NutriBullet to buy?

The NutriBullet NB9-1301S Pro is the best NutriBullet on the market. It is an Amazon’s Choice product with almost 10,000 outstanding reviews to back it up. Powerful enough to make nut butter, and many of the parts are dishwasher-safe.

One of the few flaws that NutriBullet has is they are known for leaks and bad blade design.

Putting that aside, there are many compelling advantages of buying this little blender, such as its reasonable price and its power to make exceptionally smooth smoothies. 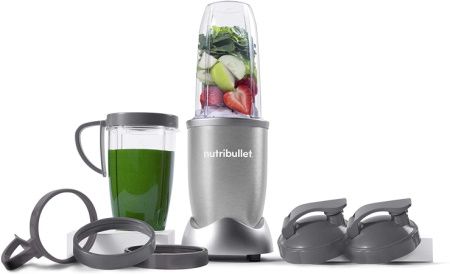 The NutriBullet NB9-1301S Pro has handles on the container that you can take off or put on because it attaches at the lid.

It even comes with lids that you can use on the go!

This deal even comes with a recipe book and comes with more power than your normal Nutribullet.

This exceptional Nutribullet model runs at 900 watts while the regular ones run at 600 watts on average. It can also hold up to 32 oz, which again is more than the original blender.

Now, let’s talk about how well it’ll pulverize your food!

The Nutribullet NB9-1301S Pro has a more powerful motor, which means it can quickly get through larger chunks of food, and it’ll last longer overall.

Do not put any part of this in the dishwasher, especially the blades. The blade will damage, and due to heat damage, it will cause leaks!

While leaks are common in this brand, it doesn’t mean you can’t avoid it from happening.

Did I cover everything you wanted to know about NutriBullet?

Nutribullet is a common blender you’ll find in many households.

While they may have a bad reputation in some areas, don’t let that discourage you from buying one.

They are convenient and are popular for a reason. Follow the limitations of the products and take good care of your appliances to make them last.

NutriBullet is loud and tends to be louder than most blenders. This noise is due to motor stress and the pulsing of the food in the container. It can be dampened, but overall, Nutribullets are always going to be loud.

Be safe in the kitchen and enjoy cooking!

The Urban Warrior Levitator Smoothie by WILLIAM ISMAEL is licensed under CC2.0