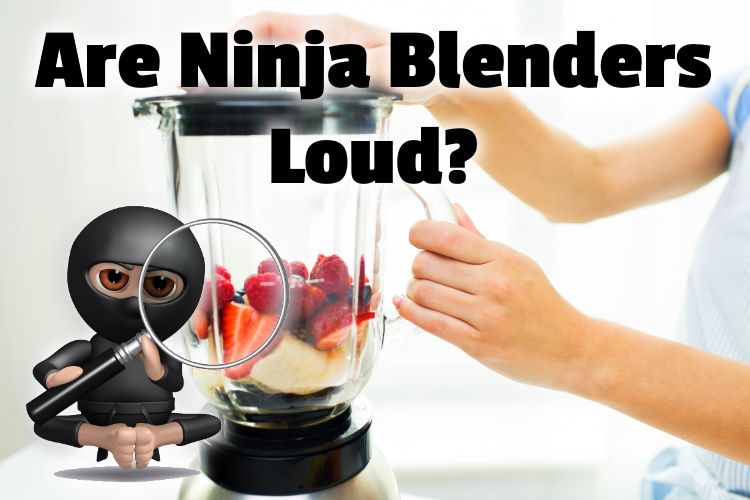 Yes, Ninja blenders are very loud at approximately 69-88 decibels depending on which model you buy. But the volume is dependent on what you are blending as ice or frozen fruit is louder than liquid. However, there are ways to lessen the noise, such as placing towels or mats under the blender for noise absorption.

In this article, we’ll go over exactly how loud these blenders are, how to make them less noisy, and which Ninja blender is the best. But I’ll also show you which blender is the quietest (hint: it’s not a Ninja).

Is a Ninja blender louder than others?

No. Ninja blenders are still about average for noise level compared to other brands. The notable exception would be blenders with a built-in quiet shield to dampen the noise.

Ninja blenders are known more for their power and size rather than being quiet.

However, this doesn’t mean they are the loudest. Compared to most blenders, Ninja blenders are reasonably quiet.

As with most appliances, you’re always going to have some sound, but it would be better if it didn’t wake the baby or the pets that just fell asleep.

At the same time, some brands like Hamilton, Jamba Appliances, and KitchenAid may beat Ninja at noise volume.

Remember to find something that works for your budget and is the best for your household. If you are looking to make your existing blender quieter, keep reading.

If you have a blender, you probably also have a food processor at home as well. To put the noise in perspective, a food processor runs at 88 decibels while some Ninja blenders run at 69 decibels.

I have a recent article that goes over why a food processor is worth having in your household if you don’t already have one. Just click the link to read it on my site.

If you’re confused about decibels, we’re going to go over it in this next section.

1st strawberry/banana smoothie I made using Ninja Pro blender and its delicious. Always use vanilla ice cream instead of Yogurt for better flavor. Even though I thought the blender was gonna take off and fly considering how loud it is. #SundayThoughts pic.twitter.com/iyuSn7EIlO

How many decibels is a Ninja blender?

A typical blender, Ninja, and other brands run at 88 decibels while the quietest Ninja blender runs at 69 decibels.

Decibels are, in the most basic sense, a degree of loudness. It’s a unit that is used to measure the power level of an electric signal on a logarithmic scale.

With that in perspective, an average decibel level is around 60 decibels. This is around the sound level of a conversation.

A whisper is considered to be around 30 decibels, and if you have prolonged exposure to 80-85 decibels, it can cause hearing damage. Also note that at this level of noise, it would take around 2 hours of constant exposure for damage to occur.

This is important, so you must know exactly what is considered loud by decibels. While you’re not going to run your blender long enough to cause eardrum damage, it’s still loud.

By comparison, the loudest rock concert ever recorded was Deep Purple in 1972, coming in at a whopping 117 decibels. (source)

Plus, most Ninja blenders blend and crush a LOT faster than other brands. That means roughly the same amount of noise for a lot less time.

The numbers in this article are sourced from the CDC.

My Ninja blender is so loud I brought it outside to make my protein shake. I feel like it could wake the entire neighborhood. My houseguest may not be up or is on the phone. Lemon-Strawberry-Yogurt-Protein. 🍋🍓💪🏼 About to do some serious #uxdesign. pic.twitter.com/OwV1IK3hz3

How do I make my Ninja blender quieter?

To make a Ninja blender quieter, the quickest solution is to place thick cloth towels or pot holders under your blender. Silicone pads also work well to quiet the noise.

You just want to make sure none of the vents are blocked. On top of this, if your blender is near a wall, move it! Move your blender to your island or kitchen table to prevent reverberation on your walls.

You’ll always get some noise, though, as that’s what happens when blades spin fast enough to turn solids into liquids.

However, for the most effective way to make your favorite drinks in the morning while everyone else sleeps, try the Dome of Silence. It’s basically a full enclosure for your blender. You place it over your blender, and it dampens the noise significantly, up to 70% noise reduction.

It was even featured on the Today Show. Unfortunately, it’s an Australian product that doesn’t seem to be readily available in the US. But if you’re in Australia, definitely get one.

What blender is the quietest?

The Hamilton Beach Professional Quiet Shield Blender is the quietest blender on the market. As you see in juice bars, this blender comes with a professional plexiglass quiet shield that completely encloses the blender to significantly dampen the noise.

This blender comes with a quiet shield that you keep open while loading the blender. Then just close it up as coffee shops and juice bars do, before blending.

It’s perfect for crushing up ice and making smoothies without waking anyone up or disturbing any conversations.

The quiet shield is detachable, and the blender has four pre-programmed settings on it. Not to mention it’s dishwasher safe!

You might be thinking that it can’t get better, but it can. You also get a 5-year warranty!

I think this is the first time I’ve gotten all 5 cats in one picture. They gathered upstairs to discuss what they’re going to do about the loud fruit annihilating machine in the kitchen (my ninja blender). pic.twitter.com/2rq7eX5X0k

What is the best Ninja blender to get?

The best Ninja blender you can get right now is the Ninja Mega Kitchen System Blender/Food Processor. It’s 1500w 2 HP motor may be loud, but it works faster than almost any other blender. It’s also Dishwasher safe and BPA free. 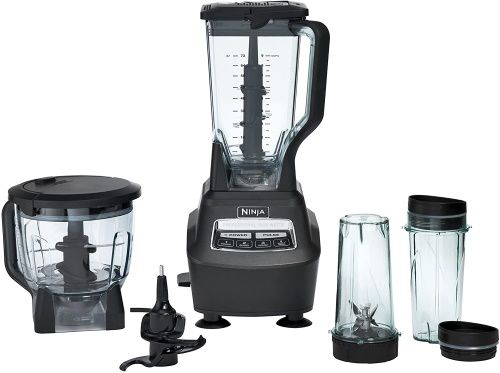 Just click that link to check the current price on Amazon.

This blender is perfect if you are looking for more power and to make more in one sitting.

As I said, the only drawback is that you would have to buy the Dome of Silence separate or use a towel. But Amazon also sells a thing called the Quiet Blender Whisper Pad (click to see on Amazon).

The reviews are generally positive, and it’s not specific about how much quieter it makes a blender.

But one reviewer mentioned being able to use his Ninja at 5 am without waking up his wife of kids. And it’s currently under $15 bucks, so it’s not going to break the bank.

The Ninja blender is also astounding at making ice coffee or any coffee in general. A lot of people tend to think smoothies are all you can make in a blender, and that isn’t true.

I have a recent article that talks about bulletproof coffee. If you know, you know, and if that’s not enough to pique your interest, I don’t know what will.

You can even make desserts or dipping sauces in a blender. Ever think about making salsa in a blender? Trust me; it makes things much easier!

Did I cover everything about whether Ninja blenders are loud?

In this article, we went over essential noise factors about a Ninja blender.

While Ninja blenders are quieter than most, the quietest ones still run at 69 decibels and can use a sound dampener.

Try using a towel or silicone mat for some peace and quiet. You can even try another brand that includes something similar already around the blender.

Even with its loud noise, this blender runs at a lower decibel than most blenders. Making it a decent budget buy. If you want the quietest blender out there, try the Hamilton Beach Professional blender I mentioned.

Before I end this article, though, I’m going to recommend reading a recent article of mine. It’s about the essential small kitchen appliances for your first home.

There are a lot of options when setting up your first kitchen, and frankly, there’s a lot of stuff you don’t need that’s a waste of money. My article walks you through the most essential items and which ones can double for others.