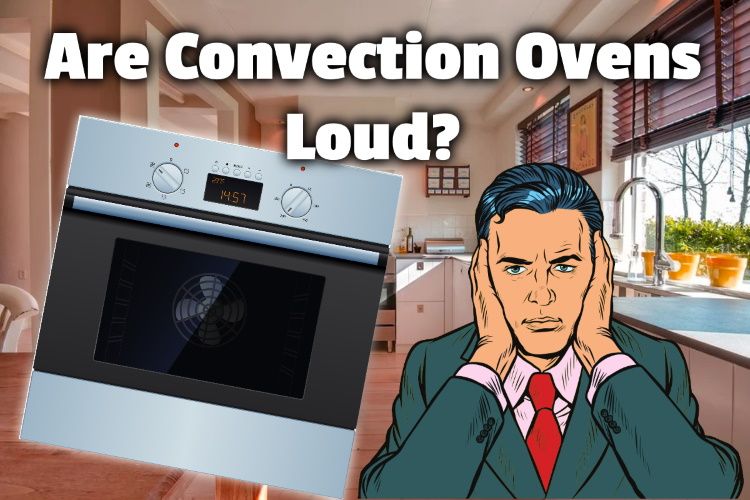 Convection ovens are definitely a better way to bake. After all, they use a fan to circulate the hot air around the food, resulting in both a faster and more even cooking experience. But with that fan, I’ve wondered are convection ovens loud?

So I did some research, and discovered:

Yes, convection ovens can be loud due to the convection fan that turns on and off at regular intervals to distribute the heat evenly throughout the inside of the oven. However, sometimes a damaged fan or motor can lead to excessive noise.

Indeed, convection ovens can be a real lifesaver when you are looking to evenly roast some chicken or brown up your cookies.

You will find answers to all the queries. Just keep reading ahead.

The fan being on top of the food in a smaller space makes food crispier than a convection oven. It gives similar results to a commercial convection oven. I made these with just a touch of avocado oil pic.twitter.com/G2hDyQ1buq

Why does my convection oven make noise?

It is normal for convection ovens to be a little noisier than a conventional oven because of the way they function.

In a conventional oven, heat rises to the top naturally. This is why things on the top rack cook a little quicker than things on a lower rack. There is no need for anything extra inside to help circulate the hot air around.

A convection oven, on the other hand, uses a fan to circulate the hot air. It works in a much similar fashion to an air fryer. Because of this fan, convections ovens do make a bit more noise. As a result, things cook much more evenly in a convection oven.

I actually highly recommend having at least a countertop convection oven (or at least a toaster oven) in your arsenal of small kitchen appliances.

You can read my full list in a recent article. Just click that link to read it on my site.

Convection ovens are best used for roasting meat and vegetables as well as baking goods that don’t need to rise, like cookies and pies. It is best for even browning on your dishes.

Should the fan in a convection oven run continuously?

If the temperature starts to drop, the fan may kick on to help maintain the same level of heat. The fan should also turn off when you open the oven door and turn back on again when you close it.

However, if you do notice that your fan is running continuously, this may be a sign that part of your oven is not working properly.

The part of the oven that is most likely to be faulty is the high limit thermostat.

There is also a chance that the oven control board may also be faulty.

This relays a signal to the rest of the oven, regulating its power to bake and broil and controlling the fan circuits. If this shorts out, your fan may continue running.

Simply put, a convection oven has a fan and exhaust system that a regular oven does not. Helping the food to cook evenly and more quickly. pic.twitter.com/z6QiA3za9p

Can you turn off the fan in a convection oven?

Just check your manual or go to the manufacturer’s website if it’s not obvious how to do it.

The noise of the fan can really begin to bother people over time. The constant hum can start to drive you crazy, especially if you just need a few moments of quiet to rest while dinner is cooking.

The good news is that some convection ovens have the option to turn the fan off and use it as a regular conventional oven. You do lose the perks of even cooking that the fan offers, but it can give you peace of mind if you don’t necessarily need it for what you are cooking.

Some people may not mind the noise, but they may have other reasons for turning the fan off.

Since convection ovens aren’t great for things that need to rise, like soufflés and cakes, turning the fan off can give you the option to use your same appliance for all of your baking needs.

What are the cons of a convection oven?

The biggest cons to convection ovens include the fan noise, having to make adjustments to both cooking time and temperature, they are more expensive, and the fan can blow toppings off food, as well as tin foil or parchment paper.

Convection ovens are a little more limited than conventional ovens when it comes to baking.

Baking delicate goods aren’t recommended in a convection oven. It can cause the cakes to rise unevenly and can even cause the top of your cake or custard to become dry and a bit crusty. It’s better suited for roasting meat and vegetables and baking goods that don’t require rinsing.

Because the temperature in a convection oven is typically higher than a conventional oven, this also means your food is more susceptible to burning. You need to have the temperature adjusted carefully so that your food doesn’t burn.

Convection ovens also tend to be a bit more expensive than conventional ovens. This is especially the case when you are looking at a convection wall oven rather than a countertop model.

If you are cooking on foil or parchment paper, the fan can cause a bit of a problem in a convection oven. You may find that it blows around quite a bit, which can interfere with your cooking.

What is the best countertop convection oven to buy?

So, you’ve decided to get yourself a convection oven, but you don’t know which one to go with? I recommend the Mueller Austria toaster oven (click to see the current price on Amazon). 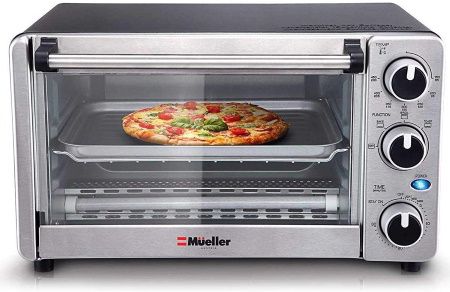 This little gadget has a temperature range of 150 to 450 degrees Fahrenheit, making it suitable for just about any type of small dish you are looking to cook.

It comes programmed with the ability to not only toast but also bakes and broils, as well as just keep food warm.

The interior design is ideal for evenly toasting up to 4 slices of bread at once. It even has enough room for a 9” pizza. You can either place your food directly on the rack, which has two levels to choose from, or you can place your food on the tray that is included.

This little oven can really save you time.

Waiting for the big oven to heat up for something so small can be a pain. In this toaster oven, you could be looking at 30 minutes or less for cook time with the built-in timer.

But this thing also has over 6,000 awesome reviews on Amazon and is an Amazon’s Choice product too. Free shipping, of course, too.

Did I cover all you wanted to know about whether convection ovens were loud?

I hope this article answers all of your questions about convection ovens and their noisy fans.

Yes, they can be a bit louder than conventional ovens because of the built-in fan, but they definitely have their perks. You won’t get the same even cooking in a traditional oven that you can get with a convection oven.

And if the noise bothers you or you want to do some baking that isn’t recommended for a convection oven, consider getting yourself one that has the optional fan turn off.