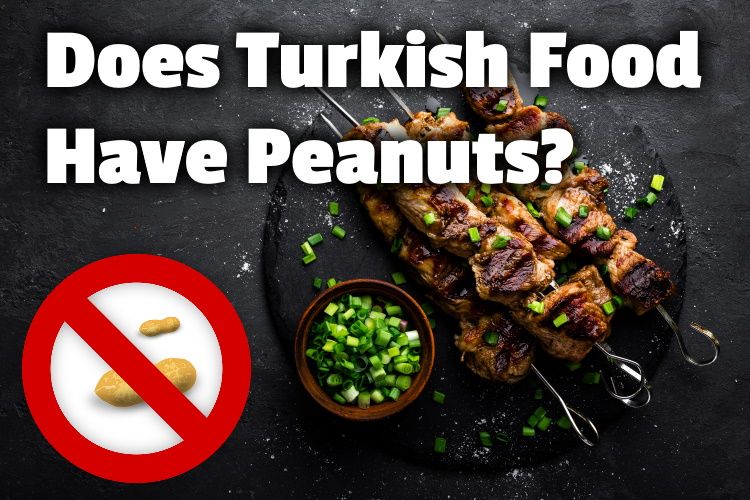 Turkey is one of the biggest exporters of nuts in the world. Naturally, a lot of their food has nuts as a key ingredient. But for those people with peanut allergies, it’s natural to wonder does Turkish food have peanuts?

So I decided to do some research, and here’s what I discovered:

Does Turkish food have peanuts? Generally, no. However, peanuts are often used for snacking and as pub or bar food in Turkey. They may also be present in some desserts and rice dishes. Restaurants may also use peanut oil for cooking. Nuts like walnuts, hazelnuts, and chestnuts are more common in Turkish food.

But there’s a lot more to know about Turkish cuisine than this.

Do you know what all types of nuts are grown in Turkey and are often used in cooking Turkish food? Besides, being peanut-allergic, do you know how you can replace a peanut with other nuts like pistachios?

I’ll help you learn more about it in this article. Just keep reading!

Does Mediterranean food have peanuts?

Mediterranean food does not usually contain peanuts, but it may be cooked with peanut oil. It does, however, have a lot of tree nuts.

Nuts like almonds, cashews, hazelnuts, and walnuts are typically included in Mediterranean fare. Baklava, a favorite Greek dessert, is made with filo pastry and a combination of tree nuts.

Vietnamese food, on the other hand, may contain an abundance of nuts. Peanuts and other nuts, like cashews, are used widely in Vietnamese cuisine.

Nuts and oils are used as a garnish, for cooking, and to grind into sauces and condiments.

Not only are nuts prevalent in Vietnam, but Vietnamese people are not very aware when it comes to food allergies. So this can be an issue when dining in a Vietnamese restaurant.

Besides, if you are traveling to Vietnam, you should consider taking some cards with you that clearly state the nature of your allergy.

Make it very clear that you cannot eat peanuts, and that doing so could kill you. To read more about peanuts in Vietnamese food, read this recent article.

What nuts are grown in Turkey?

Turkey is the world’s third-largest producer of nuts, after China and the United States. Turkey accounts for 8% of the world’s nut production.

Hazelnuts, pistachios, walnuts, chestnuts, pine nuts, and almonds are all grown in Turkey.

In fact, 75% of the world’s hazelnuts come from Turkey. Much of which comes from a small city called Ordu. Their hazelnuts are high in unsaturated fat, have a wonderful aroma, and delicious flavor.

Historically, hazelnuts have been growing along the Black Sea coast in northern Turkey since 300 B.C. It is estimated that more than 4 million people in Turkey depend directly on the marketing, production, and processing of hazelnuts.

As a result of its superior hazelnuts, Turkey is known as the Hazelnut capital of the world. This makes Turkey the most important exporter of hazelnuts in the world. Not many other countries have the right climate to grow hazelnuts.

But hazelnuts aren’t the only nuts grown in Turkey. Pistachio nuts are grown in 65 provinces in Turkey.

Besides, Turkey is the world’s fourth-largest producer of walnuts.

Usually grown without the use of pesticides or chemical fertilizers, Turkish walnuts are considered to be organic, making them highly valued.

The Turkish government provides financial support to new farmers with the intent of starting walnut orchards. As a result, walnut production is expected to rise by 40 tons within the next ten years.

Also, Turkey is the third-largest producer of chestnuts in the world. Its Pine nuts are exported to Italy, Germany, Switzerland, and Spain.

What nuts are most often used in Turkish cooking?

Turkey is home to pistachios, walnuts, and hazelnuts. They also use a fair amount of chestnuts and almonds in desserts.

Pistachios are native to the Middle East, and it is believed that they were eaten in Turkey as early as 7,000 BCE. Muslim legend claims that Adam brought pistachios to earth from the Garden of Eden.

Due to the abundance of pistachios, you will find them in most Turkish desserts. You will find them as garnishes on top of baklava, cakes, and pudding. They are the key ingredient in fried baklava, which is known as katmer.

Almonds and chestnuts are found in many rice dishes. Besides, Bademli Tavuk is a chicken soup that contains almonds.

Hazelnuts are used in oil, as snacks, and in many desserts.

Turkey, particularly Istanbul, is one of the top food destinations in the world.

It is a fusion of Central Asian cuisine, Middle Eastern, Mediterranean, and Balkan cuisines. While it varies from region to region, there are a few things that remain consistent throughout the country.

Meat-based foods like kebabs are a mainstay in Turkish cuisine, as is the abundance of nuts, particularly in desserts.

If I have a peanut allergy, can I eat pistachios?

Pistachios are delicious and nutritious. They can be eaten as a snack, and are a key ingredient in many dishes.

Pistachios are tree nuts, and they are members of the cashew family.

Peanuts grow underground and are legumes, a different plant family than pistachios. Other examples of legumes include beans, peas, lentils, and soybeans.

So, if you are allergic to peanuts, you’ll be happy to know that you can eat pistachios to your heart’s content.

Which Turkish foods have nuts?

Pistachios are found in most Turkish desserts. They are often sprinkled on top of baklava, cakes, and pudding.

One very decadent dessert is kaymak and pistachios wrapped in filo dough. It is then fried and topped with butter and more pistachios. Kaymak is also known as clotted cream. Clotted cream is made out of the milk from a water buffalo and whipped. It has the consistency of sweet, whipped butter.

You can even find pistachio cakes and ice creams.

There are a few rice dishes, like İçpilav, a dish made with rice with liver slices, currants, chestnuts, cinnamon, and a variety of herbs that contain peanuts. Other rice dishes may be may contain chestnuts or almonds.

When cooking at home, you can substitute olive oil or sunflower oil. The flavor won’t be exactly the same, but it will still be delicious.

This Wikipedia page has an extensive list of Turkish dishes and their ingredients.

Did I answer everything about Turkish food having peanuts or not?

I hope so! Turkish food and other Mediterranean food do not generally contain peanuts. This is good news for folks with peanut allergy. However, some rice dishes and desserts do contain peanuts.

Also, there are chances that some restaurants might use peanut oil for cooking food. Therefore, be careful to request them to cook your food in olive oil or sunflower oil if you are allergic to peanuts.

Turkey is the hazelnut capital of the world but also has an abundance of walnuts and pistachios.

So, what is your favorite Turkish dish?