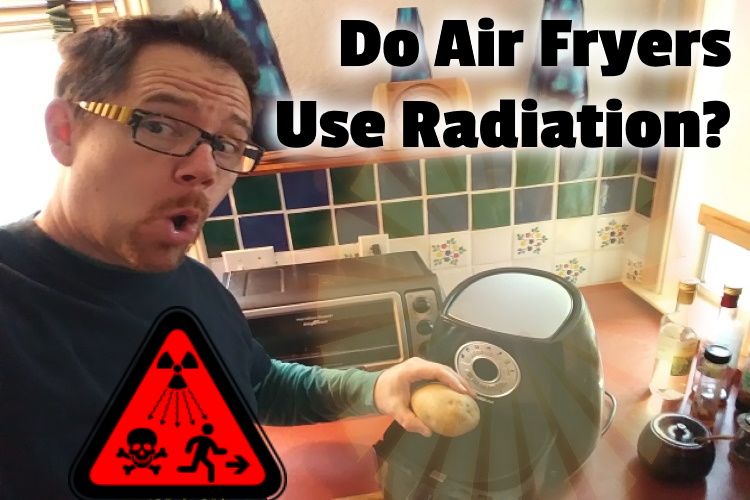 There’s been lots of hype about air fryers lately. They make food crispy with less oil, cook food fast and are really easy to use. But many people are still skeptical about their safety. So do air fryers use radiation?

Air fryers do not use radiation and work by circulating hot air around the food that has been very lightly oiled. In that sense, they are more like a convection oven than a fryer. The cooking is carried out using radiated heat, which is not the same thing as radiation.

But there’s more to know about air fryers than that. Let’s look at all of the ways air fryers work. And how they fare in comparison with microwaves?

How does an air fryer work?

Air fryers are a convenient way to replicate deep frying without all of the fat and calories that come with submerging food in hot oil.

Air fryers work by blowing hot air around the food that is drizzled or sprayed with a small amount of oil. As the air blows, the fryer circulates the oil. This results in a crunchy, crispy texture on whatever you are frying.

The Maillard reaction, named for French chemist Louis-Camille Maillard, refers to a chemical reaction among amino acids that give food a crispy texture and darkens the color.

Air fryers are able to replicate the Maillard reaction by covering your food in a tiny layer of oil as the hot air  (often around 400°) circulates around it.

Since air fryers are able to achieve the Maillard reaction, they are able to “fry” foods such as fries, chips, meat, breaded food, and vegetables using almost no oil compared to a deep-fryer.

Often air frying uses no more than a tablespoon of oil, and many times even less.

Air fryers are also easy to use and super safe. As long as they are kept clean and are used according to the manufacturer’s directions, you won’t have to worry about it overheating.

Just read this recent article to read more about whether an air fryer can overheat.

Do air fryers give off radiation?

No. Air fryers do not give off any radiation.

The type of radiation microwave use is known as electromotive force or EMF. This is NOT the same kind of radiation as associated with nuclear reactors.

Even though they do use radiation, microwaves are perfectly safe to use for cooking. But even so, some consumers still try to avoid them out of concern for potential side effects.

Air fryers don’t use, produce, or emit radiation as microwave ovens do.

However, air fryers do use radiated heat. Radiated heat is heat that is quickly heated and circulated around food. This process causes the outside of the food to dry out quickly, creating a crispy coating.

That’s why food “fried” in an air fryer is so much more crispy than if it was cooked in a microwave.

While fried food is delicious, it is typically high in trans fats. Trans fats are related to increased heart disease, cancer, diabetes, and obesity. Deep-fried foods are also very high in calories.

Air frying uses much less fat and oil, so it can be said to be healthier for you, especially if you were already doing a lot of pan-frying or deep-frying.

But you get to pick which oil you use, which is a huge plus!

Air fryers also produce high temperatures at a very rapid rate. This makes it much easier to burn food. And charred food may be carcinogenic.

There are many advantages to air friers, though.

Air fryers reduce cooking time significantly from oven cooing time. Parts can go in the dishwasher for easy cleanup, and air fryers don’t heat up the kitchen as an oven does. They also don’t smell up the kitchen like a deep fryer!

But there are many more advantages to know about.

Check out this recent article where I list 13 advantages to having an air fryer. What really surprised me was how well they work without using any oil at all; especially for baked goods!

Never ordering wings again bc my air fryer and this sauce kit is all I need pic.twitter.com/pR85b2si8i

Are air fryers healthier than microwaves?

Yes, is the short answer. At least if your top concern is the radiation being emitted by microwaves. Microwave ovens use radiation for cooking food.

Molecules inside the food get direct heat energy by radiation. The radiation technology is very similar to radio and television transmitters that make use of electromagnetic waves.

When used as per manufacturer’s instructions, they are a safe and convenient way to cook food.

Air fryers use radiated heat, which is simply heat that circulates around food. The texture of the food is very crispy and crunchy.

So, if you assume that microwave radiation is safe, neither machine is healthier than the other.

But there’re a lot of people that are skeptical about microwaves. If you are worried about radiation from a microwave, then an air fryer is a healthier option.

You can even buy toaster ovens that have air frying capability.

As an air fryer, toaster ovens use a heating element to heat food. The food is much better quality. But what you gain in quality, you lose in convenience, since toasters are much slower at cooking than microwaves are.

To read more about whether a toaster oven can replace a microwave, check out this recent article. I was actually blown away to find out they make a toaster oven/microwave combo.

Ok I take it back this air fryer is a godsend pic.twitter.com/XC93fDl1dA

Is an air fryer worth it?

If you like fried food, but don’t like dealing with the grease that deep-frying requires, and like not stinking up the house, air fryers are absolutely worth it.

They are especially worth it if you don’t have a ton of people to feed.

You don’t have to preheat it (except for a few recipes), which means you get to start cooking faster. But even so, preheating your air fryer only takes about 5 minutes, compared to the 10-15 minutes it takes to preheat your oven.

Cleaning your air fryer is super easy. The parts are easy to hand wash, or they can be put in the dishwasher.

Air fryers have a lot of advantages, and I’ve compiled a thorough list of them in this recent article. That includes all but 1 piece of air fryers being dishwasher safe!

You can even bake in an air fryer! In fact, you’ll find many recipes on the web for cakes, pies, muffins, cinnamon rolls, and even donuts!

Most air fryers are reasonably priced, as well.

The COSORI Air Fryer is a really nice and large air fryer. At just over $100 bucks, this large-capacity air fryer is a high tech cooking machine. It’s got 14,000 reviews and almost all are 5 stars!

This 5.8-quart air fryer would be perfect for baking in. It’s dishwasher safe, can fit a whole 5-pound chicken, and has 11 built-in one-touch presets. The removable nonstick basket is PFOA-free and BPA free.

But don’t let its cooking capacity fool you. It’s designed to fit easily on your counter with a smaller footprint of similar machines.

Did I answer everything you wanted to know about whether air fryers use radiation?

We also discussed that air fryers work by circulating hot air around the food that has been very lightly oiled. Instead of radiation, air fryers use radiated heat, which is not the same thing as radiation. Additionally, air fryers cook slower than deep fryers, and can’t hold as much food as a deep fryer.

You can probably replace your microwave with an air fryer, but it’s not necessarily any healthier.

There are many advantages to owning an air fryer. They are a great way to get that deep-fried flavor without your house smelling like a fast-food restaurant.

link to How to Get Rid of Air Fryer Plastic Smell

If you are brand new to owning an air fryer, you will be surprised to find that it gives off a “plastic-like” scent every time you use it. So here's how to get rid of air fryer plastic...

Continue Reading
link to Can An Air Fryer Explode? (Not unless you . . . )

I remember my first time using an air fryer was for french fries. They were great and with almost no oil, they were much healthier. But I also noticed my air fryer got pretty hot and smoked some. So...