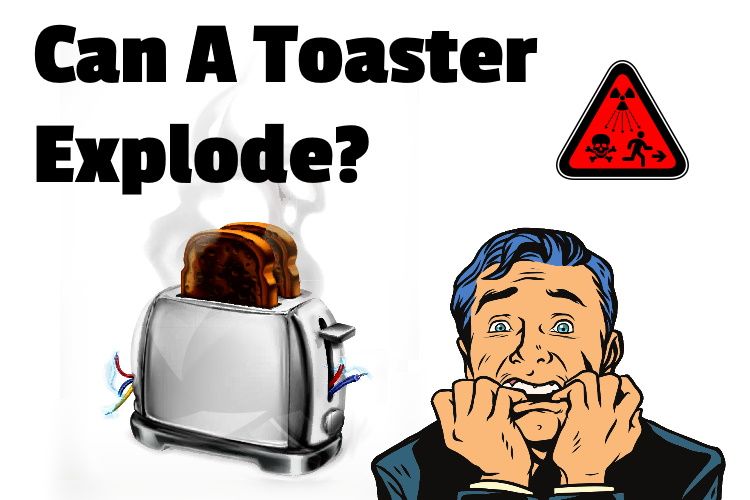 There’s nothing quite like a freshly toasted bagel! Toasters are pretty simple to use too. While common sense tells us not to stick a knife into the toaster or get it wet, can a Toaster explode?

Here is what I discovered:

There’s still plenty to learn about toasters and how they work.

Also, so you know what causes them to explode or catch fire? And if it is safe to leave them plugged in after use or long term? Don’t worry! I will answer all of your questions.

Not only will I go over toasters, but we’ll briefly talk about toaster ovens as well.

Which do you think is more likely to catch on fire?

What would cause a toaster to blow up?

Toasters do not blow up easily, as there has to be a way for fuel to ignite but get trapped which could cause pressure to find a way to get released. However, if the toaster caught on fire and was covered in an attempt to extinguish the flames, it’s possible for pressure to build up and cause a small explosion.

Just cooking a piece of toast or a pop-tart isn’t going to cause any exciting sparks and booms.

However, if you put something like a hamburger in your toaster, now that’s a whole other problem, simply because buns are generally wider than the slots in a toaster.

There are only a few ways that I know of where a toaster could explode.

The first is the most realistic by far. If you have some type of gas leak already in your kitchen your toaster caught on fire.

But in reality, that explosion wouldn’t truly be caused by the toaster as you already had a gas leak from your stove or something else.

The only other way I can think of actually causing a toaster to explode is by making a fork come in contact with both the heating element of the toaster and the housing outlet at the same time.

Even then, there will be a bright flash due to the metal fork, but nothing else will happen. This is because the circuit breaker tripped.

Again, it is not likely to happen, but I suppose kids get curious, which could make this a possibility.

So under normal circumstances and common knowledge, no, your toaster will not explode. This is still true even if your toaster is set on fire. I’ll talk about that more in a bit, though.

He stares at the toaster oven like its gonna explode or something. pic.twitter.com/1CzlUs6gec

Can a toaster oven explode?

A toaster oven is very unlikely to explode, as long as you use it as instructed and with care. However, unlike a toaster, a toaster oven does cook in an enclosed space behind a glass door. If something catches on fire while toasting, it is a good idea to open the door to ensure no pressure builds up behind the glass.

If that happens, obviously use precautions as opening the door will allow more oxygen to feed the flames. Also, make sure and unplug it the moment you suspect trouble.

Now, A toaster oven and a toaster are very different. A toaster has a minimal amount of items it can toast, such as bagels, bread, pop-tarts, and that about it.

A toaster oven has more options due to its layout being like an oven. You can make things like sausage, mini pizza, stuffed mushrooms, and much more.

I have a recent article that goes over why a toaster oven can very easily replace your microwave.

Hello, @blackanddecker. Do all of your toaster ovens catch on fire or just this one that I had to throw out the window with my dinner in it? pic.twitter.com/9d0etficNE

Can a toaster catch on fire?

Yes, a toaster can catch on fire, considering the fact that it uses heating elements and has the potential to get food particles stuck inside it. However, this may occur only when the toaster is misused. For example, you must never put a hamburger bun in your toaster or anything wider than the toaster slots.

Almost any appliance in your kitchen can catch on fire, but your toaster is more likely to catch on fire with misuse.

Now I know someone is reading this will start talking about instantaneous combustion, and no, that will not happen with your toaster.

If you leave it plugged in, it will not randomly set on fire.

Usually, it catches on fire due to not shutting off after you turn it on. If that happens, which sometimes happens with my toaster oven, it can overheat. It can also catch on fire if there are any remaining food particles in it. If the toaster overheats and there are a lot of crumbs, they will first dry out, but then blacken and start to burn.

That doesn’t mean it will spontaneously combust and set your entire kitchen on fire. But I also unplug mine when we’re not using it.

Tried to cook something today that wasn’t pasta and my toaster oven decided to explode on me 🙃 pic.twitter.com/GGmtehlc31

Is it safe to leave a toaster plugged in?

It is never safe to leave a toaster plugged in! The problem is that sometimes the timer mechanisms get stuck or malfunction and don’t shut off the heating element when the cooking is done. A toaster stuck on is a potential fire hazard, so always unplug them after use.

Leaving your toaster plugged in doesn’t even seem like it should be questioned, right?

The safest move is always to unplug your toaster after each use. This way, you will minimize the chance of it causing a fire when you’re not there.

You should also regularly clean your toaster of any crumbs lying around the bottom. This way, you don’t have the potential of the crumbs catching on fire as well.

The most important thing, though, is to monitor your toaster while using it. I know it seems easy to forget or to focus on something else while your bread toasts.

However, don’t let that be the reason you no longer have a toaster. Check up on your toaster and make sure it actually shuts off entirely.

A good safety measure is always having a fire extinguisher on hand or close by the kitchen. The kitchen is one of the most common spots for fire accidents to happen.

Where you place your toaster is also essential. Don’t put it in cabinets while cooking, and don’t store it while it’s plugged in.

I have a recent article that talks more about putting your toaster in open wooden cabinets. It might not have been something you thought of till now.

Click the link to read it on my site.

How many house fires are caused by the toasters?

Between 2007 to 2011, around 3,000 fires are reported to have been caused by either toasters or toaster ovens.

Those figures are courtesy of the National Fire Protection Association.

Now we’ve talked about your toaster exploding and your toaster possibly catching on fire. Out of these two, your toaster catches on fire are more likely to happen.

Fun fact: Air fryers cause fewer fires than toasters do.

I have a recent article on air fryers overheating. Just click the link to read it on my site.

A lot of these fires happen due to human error and improper care of your appliances.

It may seem like a pain in the butt to clean your toaster every week or once a month, but that’s better than having to repair an entire kitchen.

Overall, if you are careful and properly use your toast, you shouldn’t have to worry about fires any time soon.

Remember that just because something doesn’t happen regularly doesn’t mean it won’t happen at all. Fires started in the kitchen are a real problem and can put you and your family in harm’s way.

Remember to be safe and always have a little caution when cooking in your kitchen!

Did I cover everything you wanted to know about – can a Toaster explode?

We dived into the world of toasters and came out on the other side wiser than ever.

Cleaning your toaster and using proper handling of your toaster will help reduce a fire’s chance of starting.

Don’t forget to unplug your toaster after each use.

Your toaster can catch on fire. The likelihood of it exploding, however, is very slim. You are more likely to blow a fuse than have an explosion happen with a toaster.

Please be safe while working in the kitchen and remember to use simple safety measures to ensure both your family and home are safe.