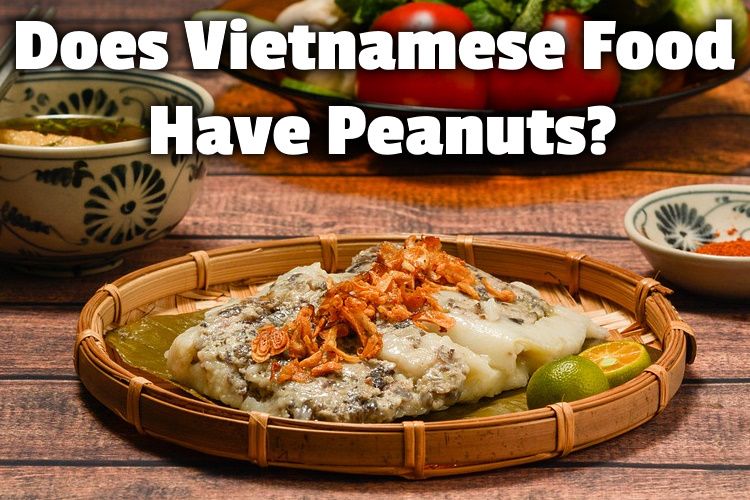 Vietnamese cuisine is delicious and is considered one of the healthiest cuisines in the world. But, what if you have a peanut allergy? If so, you’ve probably wondered does Vietnamese food have peanuts?

I decided to do some tasty exploration. Here’s what I discovered:

Traditional Vietnamese food has a lot of dishes that use peanuts as a garnish or topping. Additionally, peanut oil is also often used for cooking. But there are also a lot of well-known dishes like pho or banh mi that do not usually have peanuts in them.

But that only scratches the surface of Vietnamese food.

As I mentioned, there are a lot of dishes that use peanuts as a garnish or topping. Some may not be so obvious.

Just keep reading to find out!

for those who want to go beyond phở when it comes to Vietnamese food, here is chả cá Lã Vọng (Grilled fish La Vong style). Done with scallion, onion, peanut, and fennel. Rolled up like spring roll, or my favorite, on a crispy rice cracker. Don’t forget tương (special sauce). pic.twitter.com/QWJqDfzuy7

Are there nuts in Vietnamese food?

Peanuts and other nuts, like cashews, are used widely in Vietnamese cuisine. As are peanut oils.

Nuts and nut oils are used as a garnish, for cooking, and can be ground into sauces and condiments.

Not only are nuts prevalent in Vietnam, but Vietnamese people are not very aware when it comes to food allergies. So this can be a hindrance when traveling to Vietnam.

If you are traveling to Vietnam, you should consider taking some cards with you that clearly state the nature of your allergy. Make it very clear that you cannot eat peanuts and that doing so could kill you.

However, if you are not traveling, but are visiting your favorite local restaurant, chances are the owners are a little more aware of allergies. They are also likely aware of the dangers of peanut allergies.

Your safest bet, though, would be to cook it yourself. Then you have complete control over the ingredients. Your friend can have full confidence that there are no peanuts in the dish, nor will there be any cross-contamination.

Dishes like banh mi and pho can be made peanut-free and are relatively simple to make. They don’t have to be too labor-intensive, either.

Vietnamese Bánh mì is probably one of my favorite corrections of French cuisine 😋 pic.twitter.com/HmHpkAzgDM

Does banh mi have peanuts?

Banh mi is the Vietnamese word for bread. It’s a staple food similar to a hoagie roll or small baguette.

It was introduced as a baguette to Vietnam during the French occupation of Vietnam in the 17th century.

The baguette is often split lengthwise and filled with sandwich ingredients such as meat and bread.

A typical banh mi sandwich is commonly made with pork, cucumber, pickled carrots, and pickled radishes. Condiments usually consist of chili and mayonnaise.

But, sometimes, banh mi is filled with ice cream! In Vietnam, sandwiches are eaten at breakfast or as a snack.

While it’s not typically made with peanuts, the banh mi filling could be cooked in peanut oil or have a peanut sauce on it.

This recipe in the New York Times for Banh mi uses peanut oil or vegetable oil to cook the pork filling. Because you are making it at home, you can rest assured that your Banh mi will be peanut-free.

While Vietnamese cuisine does have some French commonalities, it is more similar to Chinese food. Like Chinese food, it uses very similar ingredients and flavors, such as:

To read more about the similarities and the differences between Vietnamese and Chinese cuisine, just read this recent article. What really surprised me was how much healthier one is compared to the other, despite their similarities.

Vietnamese food is delicious, but painful to eat since I have to make sure there’s no peanut. pic.twitter.com/7KvFdvY1Gp

Pho (pronounced fuh) is a Vietnamese noodle soup. It usually contains some sort of protein, like chicken, steak, pork or shrimp.

Traditional pho is made with thin rice noodles and a broth made of beef stock and a variety of spices.

Pho does not usually contain peanuts. However, pho sometimes has peanuts on top as a garnish. However, most restaurants serve pho garnish on a plate served alongside the bowl of soup. It’s also possible the meat could be cooked in peanut oil.

However, it’s usually fine for someone with a peanut allergy to eat pho. Just make sure that they don’t add the peanut garnish or use peanut products for cooking or in the broth.

As always, if you are prone to severe allergic reactions, always speak to the chef and take whatever precautions you need to.

Because of the extensive use of peanuts in Vietnamese food, cross-contamination in the kitchen is high. Unless you really trust your favorite Vietnamese restaurant, you will be better off making pho at home.

This recipe is a short cut recipe that uses a quality store-bought beef stock to make the pho broth. It’s also peanut and peanut product free!

We have many appetizers to choose from, and all of them can complete your meal! One being fresh spring rolls that are served with peanut sauce! #SaigonSurface #Vietnamese #Food #DowntownOmaha pic.twitter.com/sNPrls2liw

Do Vietnamese people eat a lot of peanuts?

Peanuts and peanut oils are used extensively in Vietnamese cooking and sauces. Even when not used in the cooking, peanuts and other nuts like cashews are often used as garnishes as well.

Peanuts are also a delicious snack boiled and lightly salted.

If you want to introduce a friend to Vietnamese food and they have a peanut allergy, it could be fun to host a dinner party where you cook the food. This way your friend can rest assured that they are eating peanut-free dishes.

Luckily, there are many recipes for authentic Vietnamese cuisine that you can make at home.

Traditional Vietnamese food is made with fresh ingredients, few fried foods, and light ingredients like rice noodles, basil leaves, bean sprouts, and abundant use of fresh vegetables. It is considered very healthy and uses simple, easy to find ingredients.

Another dish that may contain peanuts or peanut oil is curry. Curry isn’t just a standalone ingredient, though, it’s actually a dish made of several fresh spices.

And while every Asian country has its own version of curry, each tends to be fairly different.

I talk about what curry is, and the differences between Indian and Thai curry in this recent article. You too might be really surprised that only 1 type of Asian curry actually uses curry leaves.

How did peanuts become a part of Vietnamese cuisine?

Peanuts are grown in seven regions of China, including the South China region. Considering that South China borders Vietnam, peanuts were likely brought to Vietnam from China.

But, European explorers first discovered peanuts in Brazil as early as 1500 B.C. Portuguese and Spanish explorers took the peanuts back to Spain, where traders and explorers then took them to Asia. (source)

For about a thousand years, circa 111 BCE, Vietnam was considered a Chinese Province. As a result, Vietnam’s cuisine is heavily influenced by Chinese cuisine. As is their use of chopsticks and the wok. (source)

While there are Chinese influences, there has been some evolution of Vietnamese cuisine. Many foods look similar to Chinese food, but Vietnamese food is considered to be much healthier than Chinese food.

They don’t use near as much soy sauce, instead using fish sauce to flavor dishes. They also use more fresh vegetables in their dishes and fewer fried foods.

Did I answer your question about whether Vietnamese food has peanuts?

In this article, I talked about the use of peanuts in Vietnamese food.

I talked about whether Vietnamese people eat a lot of peanuts. But I also discussed how peanuts became part of Vietnamese cuisine.

We even discussed a couple of popular Vietnamese dishes and provided simple, easy to follow recipes that you can cook at home.

I talked about how Vietnamese is one of the healthiest cuisines in the world. While it does contain peanuts and peanut oil, it can be made safely at home. By making it at home you, your friends, and family can rest assured that you are getting a delicious, healthy meal with no risk of injury due to peanuts or cross-contamination.

Most importantly, I answered the question: does Vietnamese food have peanuts?