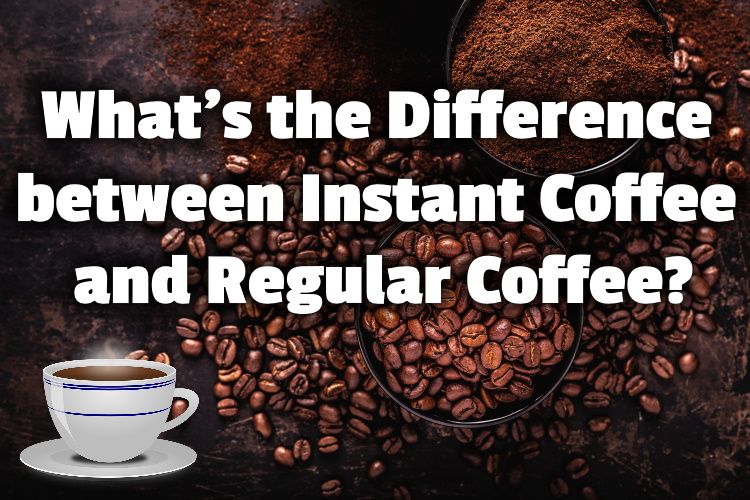 Instant coffee has gotten a bad rap over the years. Most of us had that grandparent with the giant tin of instant coffee on their counter. But these days, there are a lot more coffee snobs than in decades past who wouldn’t even consider instant coffee. But what’s the difference between instant coffee and regular coffee?

Here’s what I discovered in looking into it:

The drying process is either freeze-dried or hot air-dried. However, many instant coffees also use the inferior robusta coffee bean compared to the Arabica bean used in higher-end brands.

Many people believe that instant coffee is inferior to standard ground and brewed coffee. I would definitely be among them.

It may not have quite the same depth of flavor or require the same craftsmanship as a cup of brewed coffee. But modern brands of instant coffee can still find their place in most homes around the world.

And certain brands of instant coffee can still make a decent cup of coffee if you are in a hurry. And it works great for camping or road trips where a nearby Starbucks may not be available.

But let’s get more into the details of the differences. We’ll explore why those giant tins at grandmas house taste so bad, and which modern brands can actually cut it when it comes to flavor.

Is instant coffee as good as regular coffee?

Believe it or not, instant coffee is very popular in various areas around the world. In fact, almost half of the world’s population claims they prefer instant coffee over the traditional brews!

Overall, it is cheaper, faster, and easier to make, which are all important factors when you are trying to run out the door for work or even make yourself that mid-afternoon cup at your desk.

However, despite its popularity in the east, much of the western world still prefer the fresh stuff, especially those who have refined palates for coffee. In fact, according to an article in The Washington Post, the U.S. is the only real exception to the instant coffee craze.

When it comes to health benefits, there are some areas in which instant coffee may be stronger.

Some types may contain higher amounts of antioxidants due to its concentrated form. It may also be lower in caffeine, which may not be what you want when you need a pick me up. But it could be a positive aspect for those who are looking to lower their caffeine intake.

When it comes to flavor, those with refined coffee palates will be able to detect the difference between regular and instant coffee almost instantly. This is mainly because fresh coffee maintains all its essential oils and chemical components, giving it a fuller flavor.

This, combined with the larger variety in flavor with fresh coffee, gives it a more subtle flavor than most instant variations.

Can I use ground coffee as instant coffee?

Regular ground coffee will not turn into instant coffee upon adding hot water. The coffee, even if ground using the fine setting on a grinder, will still be too coarse and the grinds would end up floating in the brewed coffee.

If no coffee maker is available, grind the coffee finely, add hot water, allow to steep for a few minutes, and then strain through a paper filter or cheesecloth.

Upon first glance, some instant coffee blends can look just like regular coffee grounds. However, they are not the same thing.

But you can’t really substitute ground coffee for instant and vice versa.

You can’t expect to pour hot water over coffee grounds and have them dissolve in the same way instant coffee will. If you have the right tools, you can still make a decent cup of coffee.

But without some sort of filter, you will have some gritty coffee.

All you need is a French press.

Now, of course, a Keurig coffee maker can also make a cup of coffee in just a few minutes; it is actually quicker than a French press. However, if you are looking for smooth and pure coffee flavor, a French press is the way to go.

You can read more about French press coffee in a recent article. In this article, I go over the pros and cons of having a French press as well as how to make the best French pressed coffee.

What is considered instant coffee?

Instant coffee is made from regular coffee that has been brewed at a high concentration with water and then either freeze-dried or air-dried. The result is then ground up coarsely and packaged.

Now, you may be asking yourself what dried coffee extract is, especially since we’ve already established that ground coffee is different from instant coffee.

To make instant coffee, the process starts by brewing coffee in pretty much the same way you would brew regular coffee, only in a much more concentrated “dose.”

After the coffee is brewed, the water is then removed to create dry fragments or powder that will dissolve when water is added.

Water is removed from the extract and turned into instant coffee in one of two ways:

Both of these methods help to preserve the quality, aroma, and flavor of the original coffee so you still get a good cup of coffee simply by adding hot water.

Why is instant coffee so bad?

Instant coffee is bad as many brands use the inferior Robusto coffee bean instead of Arabica beans, resulting in an inferior flavor. But also the process of making instant coffee also increases the amount of acrylamide in it which is a chemical found in studies to be harmful.

Acrylamide is a chemical that is used in many industrial processes.

This includes the production of paper, dyes, and plastics. It can also be produced when coffee is brewed and possibly even found in other foods like potatoes (fries, chips, etc.), canned black olives & prune juice.

Though more research needs to be conducted, it is believed that excessive intake of this chemical can increase your risk for certain cancers as well as cause damage to your nervous system. (source)

While drinking coffee has not been proven to increase your risk of developing cancer, you do want to be careful of overexposure to this chemical if you drink quite a bit in a day or if you primarily drink instant coffee.

It is believed that due to its high concentration, instant coffee may contain up to twice as much acrylamide as regular coffee. Again, nothing to be overly concerned with, but something to be aware of.

Of course, even though regular coffee has its health benefits, it still has its downsides. Because it is a crop, non-organically grown coffee beans will have been exposed to pesticides and herbicides.

If you are concerned about toxic chemicals in your coffee, organic coffee may be a better way to go, as explained in a recent article. I get into all the downsides of non-organic coffee. But I also bust one of the biggest myths out there in terms of pesticides and coffee beans.

Is instant coffee made from arabica or robusta coffee beans?

Generally speaking, most instant coffee, is made from robusta beans. Robusta is an inferior bean to the higher-priced Arabica bean. So the brands that do use Arabica proudly state that on the front of their labels.

So, aside from acrylamide, another big reason a lot of instant coffee tastes bad is the inferior bean they often use to make it with. Coffee is either made from arabica beans or robusta beans.

Arabica beans are vastly superior. So in this section, let’s explore that further.

The arabica shortage of 2011 also caused many companies to switch to robusta beans. So while instant coffee sales in the US are pretty flat, overall robusta sales increased 7% following the shortage. (source)

So what’s the difference between robusta beans and arabica beans?

What is the best instant coffee to buy?

Here are a few brands and blend recommendations for those who may be looking for a new instant coffee to try:

Click any of those links to check them out on Amazon, read reviews, and see the current price.

Did I cover all you wanted to know about the difference between instant and regular coffee?

I hope this answers all of your questions about the difference between instant and regular coffee.

For those who want a quick cup of coffee in the morning or midday, there is nothing wrong with instant coffee. You can save money by avoiding the trip to Starbucks and make it just about anywhere with just hot water.

However, if you are looking for depth and variety in flavor, fresh coffee is the way to go.

link to Is Organic Coffee Healthier? (The surprising truth)

Organically grown food is typically more expensive than its traditionally grown counterparts. Coffee is no exception to this rule. So if you're paying more, it's not uncommon to wonder is organic...

Continue Reading
link to Is it OK to Use Distilled Water to Make Coffee?

If you’ve recently bought a new coffee maker, you might be wondering what the best kind of water is to use to make coffee. You may be considering using distilled water. But is it OK to use...