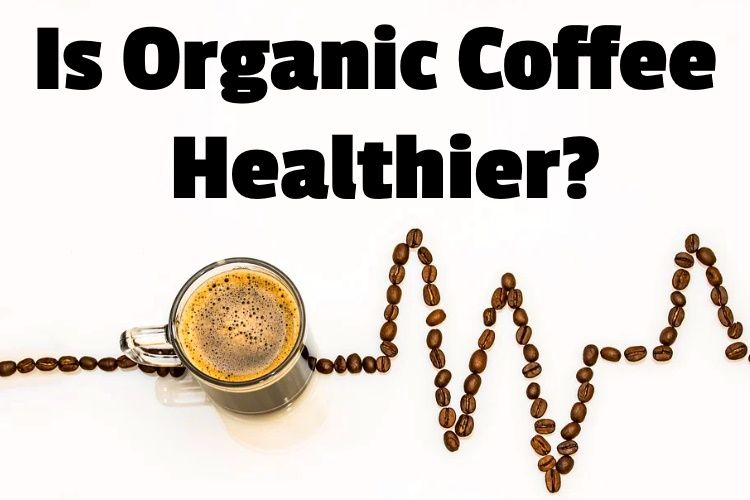 Organically grown food is typically more expensive than its traditionally grown counterparts. Coffee is no exception to this rule. So if you’re paying more, it’s not uncommon to wonder is organic coffee healthier?

Here’s what I know from 2 decades in that industry:

Organically grown coffee is not healthier as roasting non-organic beans actually removes 99.8% of the pesticides. And all coffee, organic or otherwise, offers a reduced risk of cardiovascular disease, type 2 diabetes, Parkinson’s disease & gout according to Harvard.

So, the main benefits of organic coffee are to the coffee workers, land, & environment due to the lack of pesticides.

But there’s more to know about organic coffee than just that, so let’s look at it a little more closely.

So today, we’re getting into all of it! How much pesticide is actually on non-organic coffee, whether organic is tied to Fair Trade coffee and more! We’ll also examine the “real” benefits of organic coffee which are to the land, animals, and producers of the world’s coffee regions.

So, what makes coffee organic and what are the benefits of drinking organic coffee?

Keep reading to find out!

Wondering exactly what the overall price difference is, on average, for organic and non-organic foods?

Just click the link to read it on my other site.

One of the primary benefits of organic coffee is that it ensures the soil where it’s grown is always of the highest-quality and mineral content. Pesticides can often kill some of the best nutrients in the soil, meaning the next yield grown in it could be lacking vital nutrients pic.twitter.com/4yOC8HCOCi

In the US, the USDA dictates that coffee that gets labeled as organic or organically grown cannot use synthetic substances. These substances include most pesticides, herbicides, and fertilizers. To be labeled “organic,” at least 95% of the beans must be grown under these organic conditions.

Getting certified as an organic grower is not as easy as it sounds. In the U.S., you have to actually produce organically for 3 years before you can actually obtain that certification.

But it’s not just the growing process that needs to be chemical-free. The shipping and the roasting process must also follow USDA guidelines to be deemed certified organic. (source)

Being certified organic, however, doesn’t mean that a company is environmentally or socially responsible.

This is where Fair Trade coffee would come in.

Fair Trade coffee producers make the conscious decision to positively impact the environment. They reduce, reuse, and recycle materials wherever possible throughout the entire trading process.

Is “regular” coffee full of pesticides?

Coffee is not eaten raw like fruits and vegetables you find in the supermarket.

The coffee bean is actually the seed of a fruit. The flesh of the fruit is discarded. The seed is then soaked, fermented, and put through a drying process. It is then roasted at temperatures exceeding 400 degrees Fahrenheit.

After it comes home with the consumer, it is further soaked in near-boiling water. Finally, we only drink the water and don’t actually consume the coffee bean itself.

Given this extensive processing, it’s hard to believe that any of the chemicals used in growing actually make it into our bodies.

But don’t take my word for it.

According to the Journal of Agricultural and Food Chemistry in a recent study, the “Washing of coffee beans showed 14.63−57.69 percent reduction” (in pesticides present), and “the roasting process reduced (pesticides) up to 99.8 percent.” (source)

What percentage of coffee is organic?

Approximately 30% of the coffee that is grown around the globe is organic, but the US consumes nearly half of all organic coffee grown worldwide.

The United States is the largest consumer of organic coffee beans. There are over 40 countries in the world that produce organic coffee.  (source)

It’s no surprise that Americans purchase such a large quantity of organic coffee. Consumers have gotten to be very savvy over the last couple of decades, and want to know what is in their food.

They are understanding that the way our food is grown can impact our health in the long run.

They also understand that how our food is grown can have dire consequences on the environment. The chemicals used in conventionally grown coffee can run into local water sources, polluting the nearby drinking water.

Additionally, coffee growers clear-cut the rainforests to have large growing areas. This not only impacts the environment, but it also hurts local wildlife by destroying their habitat.

I mentioned temperature above. How hot you brew and serve the coffee has a huge impact on flavor.

If you’re anything like me, you like a really hot cup of coffee. But the perfect temp really does make or break the flavor of the coffee.

Don’t believe me? Read this recent article to see which coffee maker makes the hottest cup of coffee and how that compares to places like Starbucks and even the dreaded “McDonald’s hot”.

What are the benefits of organic coffee?

Here are a few of the residual benefits of organic coffee:

Fair Trade coffee is grown by farms that are members of a cooperative Fair Trade group. Fair Trade means that coffee is bought at a reasonable price, allowing small farmers the ability to compete with bigger corporations.

Another thing to think about when considering the health aspects of coffee should be the kind of water you use when brewing your coffee.

Check out this recent article where I discuss using distilled water to brew your coffee. Distilled water has been processed to remove impurities. But it also removes beneficial minerals. But is spring water truly a better choice?

Just click the link to read more on my site.

What is the healthiest coffee?

The healthiest coffee bean would be an Arabica bean that is a dark roast. This gives the fullest flavor with the least amount of caffeine jitters. However, Bulletproof Coffee, which adds MCT oil and unsalted, grass-fed butter, has been shown to provide many health benefits.

It seems like the opinion about coffee being healthy or carcinogenic is always changing. Over the last several decades, coffee has been heavily studied.

According to this article from Harvard Health Publishing, moderate coffee consumption has been linked to a longer lifespan.

Coffee drinkers may have reduced risk of:

Of course, there are risks, too. The majority of which are minor, like impaired sleep or feeling jittery.

If you are concerned about pesticides, herbicides, and fertilizers, then organic coffee would be the “healthier” choice. However, given the amount of processing of the coffee bean, the number of chemicals consumed would be nominal.

The primary health benefits would not be to the consumer, but to the workers themselves and the environment. In this instance, the workers would clearly be healthier if they are not exposed to harmful pesticides and herbicides.

The land would be more fertile as well, and more apt to continue producing crops year after year. The animals in the crop areas would also see significant benefits from the reduction or elimination of pesticide use.

So while I am stating clearly that the vast majority of pesticides are not likely ending up in your coffee cup, I am not claiming there is no benefit to organically grown coffee beans.

So what is the deal with Bulletproof Coffee?

Of course, there’s no official verdict. However, many people do find amazing benefits from what’s called “Bulletproof Coffee.

The concept of Bulletproof Coffee originated with Dave Asprey, author of the New York Times best-seller The Bulletproof Diet (click to see it on Amazon). On that diet, Asprey claims to have:

All of that sounds great, but what is in Bulletproof Coffee, and is there any evidence to support his claims?

Bulletproof coffee is intended to replace breakfast and is very high-fat and high-calorie. Asprey created his recipe for Bulletproof Coffee using:

He mixes all of that in a blender. MCT oil is a medium-chain fatty oil with “many health benefits” according to Healthline. MCT oil is most often gotten from coconut oil, but it can also be found in dairy products and palm oil too.

Healthline goes on to state that MCT oil:

So certainly it seems that Bulletproof Coffee could be the healthiest coffee out there, pesticides or not.

If you don’t want to go to all the trouble to make your own Bulletproof Coffee, Asprey also makes his own packaged cold brew version which doesn’t require refrigeration.  Multiple flavors and options are available too.

They also make ground, K-Cup, whole bean versions, and decaff too. It’s also worth noting that most of his products are indeed organically-grown.

to see the Bulletproof line on Amazon.

Did I answer all of your questions about organic coffee?

In this article, I discussed what makes organic coffee “organic.” I talked about how it is grown, and the potential benefits of organic coffee.

Organic coffee, particularly when it is paired with the Fair Trade label, is not only environmentally friendly, but it’s farmer-friendly, too.

While the health benefits of organic over conventional coffee are minimal, the impact on the lives of growers can be profound.

One way to enjoy an environmentally friendly cup of coffee is to use a French press.

But French Presses do have their drawbacks. They can break easily since they are glass. But they also lose heat quickly too since they aren’t insulated.

In this recent article, I discuss how French press coffee makers make pure, delicious coffee quickly and easily. But I also give my ninja tip on how to make sure it doesn’t get too cold too quickly!

Do you purchase organic coffee? If not for the health benefits, for the environmental and social benefits?