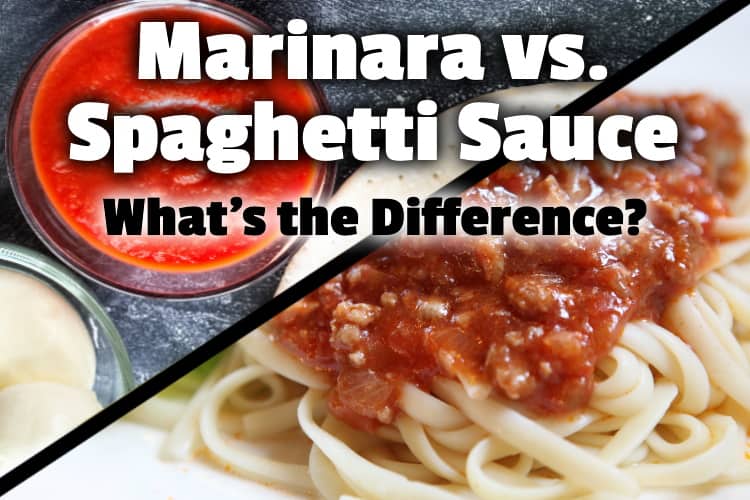 Marinara sauce and Spaghetti sauce are 2 staples in American-Italian cuisine. However, when cooking pasta and needing a sauce, many have wondered what is the difference between marinara and spaghetti sauce?

Here’s what I know from cooking both:

When it comes to red sauces, it can be challenging to tell them apart. They may all use the same essential ingredients, but they can vary quite slightly in flavor, consistency, and the way you use them.

The most significant differences amongst these sauces are between marinara sauce and spaghetti sauce – instead, traditional tomato sauce, not the store-bought stuff.

Traditional spaghetti sauce is almost solely used for pasta, but it can also be used to smother other dishes due to its thick consistency. Marinara sauce is a bit more versatile. Its thinner consistency makes it great for both coating and dipping.

Why is it called marinara sauce?

“Marinara” translates literally to “mariner style” as it was commonly preferred by Italian sailors who would go on long journeys at sea and needed something easy to prepare that wouldn’t go bad quickly.

But the origins of marinara sauce are widely debated; it’s hard to pinpoint exactly where it came from and got its name.

Most agree that the sauce originated in southern Italy, most likely in Naples, or perhaps, in Sicily. Its birth could not have been before the 17th century since tomatoes didn’t find their way to Italy from the new world until close to the mid-1600s.

The term marinara comes from the Italian word marinai or mariners. But why is it named for sailors?

The most likely explanation is because this sauce – which happens to be the simplest of all tomato sauces – uses very few ingredients. It is made with oil, tomato sauce, garlic, and dried herbs (basil, crushed red pepper, and sometimes oregano), all of which do not spoil as quickly on long journeys as meat or fish does.

Another theory states centers around the sailors’ wives rather than the sailors themselves.

Since it can be made very quickly and easily, it is believed that when the women saw the ships on the horizon, they would go home and throw this sauce together to have a hot meal ready for their husbands on returning.

No matter which theory is correct, the fact remains that marinara sauce is effortless to cook with very few ingredients. Compared to other sauces, it only needs a short simmer time, demanding only an hour at max.

Can I substitute spaghetti sauce for marinara sauce?

But it again depends on what you classify as spaghetti sauce. Believe it or not, a jar of spaghetti sauce on the supermarket shelf is most likely a form of marinara, if we are speaking in the traditional sense of these terms.

However, if you are talking about the traditional homemade tomato sauce that goes on spaghetti, you can’t really interchange the two.

The consistencies and flavors can be entirely different.

So, when it comes to store-bought spaghetti sauce, you can easily interchange the two. Just try tossing the noodles in the sauce to coat them thoroughly.

We like to make a double batch of this Thick #Marinara #Sauce, some for now and some to freeze for later. #Recipe and #video demo here: https://t.co/piHPKxK8Qf #Cooking #Dinner #MarinaraSauce #Subscribe pic.twitter.com/bBtvqnaaxS

Marinara sauce is thinner, not thicker, than real spaghetti sauce, or a rather traditional tomato sauce. But jarred sauces of both names sold in the United States will likely be very similar in flavor and consistency.

Most spaghetti sauces you buy off the grocery store shelf are some form of marinara due to its thinner consistency and chunks of tomatoes. They both use a combination of tomatoes, herbs and spices, and olive oil.

Not only is it thinner, but marinara is completely vegetarian in most cases, whereas most tomato sauces are thick, rich, and complex, starting with a base of some sort of pork.

Spaghetti Casserole made with your favorite marinara sauce, lean ground beef and shredded Mozzarella cheese is a deliciously quick and easy weeknight meal.

Is marinara sauce good for spaghetti?

Marinara sauce can be used for spaghetti or any cut of pasta. But being thinner than spaghetti sauce, it tends to work best on long cuts such as spaghetti, fettuccini, linguini, and angel hair.

Most American households keep their spaghetti pretty simple. It’s a cheap and easy meal that can feed a large group quickly.

It is best not to pour the sauce over naked noodles if you are using a store-bought spaghetti sauce or marinara. Cook the noodles al dente and toss them in the sauce, so they are completely coated. This will give you more flavor in every bite.

Marinara sauce isn’t only for spaghetti, though. You can use it in quite a variety of dishes, beyond Italian cuisine. For instance, try using it in one of these other ethnic dishes:

And of course, you can’t go wrong with Italian cuisine. Try marinara in one of these classic dishes:

There are a few more differences between marinara and pizza sauce, though. So let’s explore in greater detail.

Another big difference with pizza sauce is that most of them contain balsamic vinegar, a unique vinegar made from grapes that are used in many traditional Italian dishes. You can read more about balsamic vinegar in a recent article.

Tomato sauce, on the other hand, is typically thick, rich, and complex. Originating in France – with sauce tomat – tomato sauce requires a lot more ingredients and takes a lot of patience.

Traditionally, tomato sauce starts with a roux of flour and butter mixed with salt pork or bacon, onion, and carrots. As these flavors merge, you add fresh tomatoes, bay leaves, garlic, and some sort of stock (traditionally veal, but chicken most of the time today).

The tomato sauce is then left to simmer for hours on end.

During the cooking time, it will thicken up and bring out more of the flavors. It even tends to get a little sweeter than marinara or pizza sauce as the tomatoes break down. You can also add ground beef or Italian sausage for a bit more depth in flavor and texture.

Due to its flavor and thickness, real tomato sauce is best used like gravy to smother foods like spaghetti or to make dishes like chicken cacciatore. It’s almost never used as a pizza sauce.

Here is a chart that outlines the main differences between marinara sauce, pizza sauce, and tomato sauce. It is important to remember that there are several variations to each of these sauces.

This chart breaks down the basic elements of the three

Of course, no Italian sauce would be complete without a great quality extra virgin olive oil!

But olive oil can be very confusing! Light, pomace, virgin, extra virgin, and reports of olive oil being fake! Luckily I break it all down in a recent article which is the Ultimate Guide to Olive Oil!

Hopefully, this answers all of your questions about the difference between marinara and spaghetti sauce (traditional tomato sauce).

Marinara can be used in a variety of ways since it tends to be thinner than tomato sauce. On the other hand, spaghetti sauce is much thicker and best used for smothering dishes, like pasta and sometimes even biscuits.

It’s safe to say that neither is better than the other, though. You can make some tasty and unique dishes with both types of sauce.

While I do own a chef's knife, I wondered why certain chefs pick certain knives and what a chef knife is good for beyond how I use mine. So, I wanted to research and create the ultimate guide for...

Olive oil can be confusing! After all, what's the difference between types of olive oils (extra virgin, light, pomace, etc), what are some of the benefits of olive oil and are some olive oils...