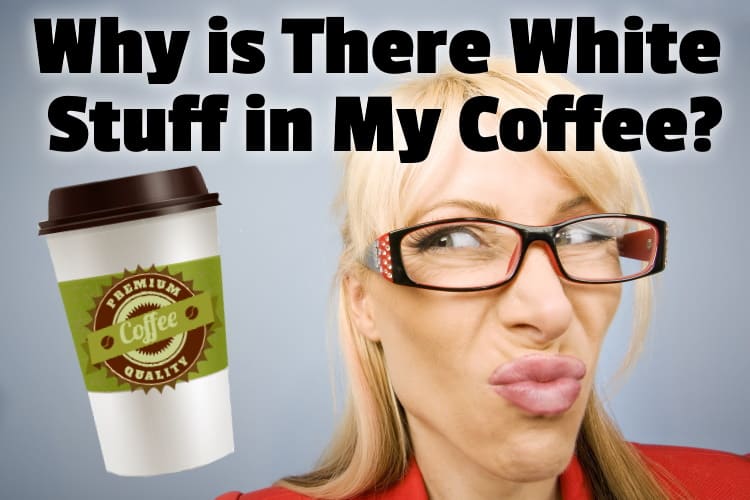 Sometimes when I brew my coffee, I’ve seen small white specks floating in my coffee. While I can remove it easily enough with a spoon, it got me wondering about how and why is there white stuff in my coffee?

So I did a little research to find out. Here’s what I discovered:

But there’s a lot more to know.

This is the skin from coffee beans. Coffee chaff. It comes off during the roasting process. Not good for much but… https://t.co/96Dv92agib pic.twitter.com/2IxtHpG05p

What is coffee bean chaff?

Coffee bean chaff is the dried skin on the coffee bean. Also known as the husk, and it usually comes off during roasting.

Chaff has no flavor other than the oil it absorbs from the coffee bean so that it won’t affect the flavor of your coffee.

Companies are always trying to find things to do with the chaff because it’s a bit of a nuisance. Throwing it out just add to pollution. But chaff doesn’t just have to be wasted. It can be used as a fertilizer, mulch, and even bedding for domestic pets and chickens.

If you want to purchase coffee from a company that reuses or recycles the chaff, you should consider organic coffee. While organic doesn’t necessarily mean it is any healthier, Fair Trade coffee companies are known for paying sustainable wages and following environmentally friendly growing and roasting processes.

If you wish to learn more about organic and Free Trade coffee, check out this recent article.

When roasting, your chaff comes off in whole pieces when your coffee beans are well cared for. @ninetyplus rocks! pic.twitter.com/z8NYlIdp7g

Why are there white bits in my coffee, and is that coffee chaff?

Coffee chaff won’t show up in your brewed coffee because it is filtered out with the rest of the coffee.

And commercially ground coffee doesn’t usually have chaff in it because it’s removed after the roasting process.

However, in case of freshly ground coffee, if you see white bits on top, it’s likely chaff.

Besides, if you’ve brewed your coffee and added creamer or milk to it, those white bits floating around could be any number of things.

I’ll start with the easy one.

Powdered creamer. If you’re using powdered creamer, it could only be that those little white specks are creamer particles that didn’t get mixed in enough. You can try mixing it in some more, or you can just drink it as is. Either way, it may hurt you.

If you use milk or any other liquid creamer, it could be that it’s on the verge of going bad. Even if it’s not reached the expiration date and it doesn’t smell bad, it can separate slightly, causing those little bits to break free.

It could also be a combination of coffee temperature and using a high-fat cream. If the coffee isn’t hot enough, the butterfat in the cream may not get hot enough to dissolve completely.

Another kind of coffee that may leave little white bits floating is bulletproof coffee. Whether you use grass-fed butter or not, it doesn’t matter.

It’s the high-fat content that matters. I wrote this recent article that talks about why grass-fed butter is slightly better, but not necessary.

Question of the morning: Do you drink coffee? How do you take it?

Me: Iced decaf with sugar free marshmallow syrup and non-dairy creamer half and half! #keto #goodmorning #breakfast pic.twitter.com/KZW545f5EB

Why does my half and half separate in my coffee?

Just like with milk or cream, half-and-half will separate if your coffee is too hot. The acidity of the coffee, combined with the heat, can cause half-and-half to separate.

If you want to avoid separation, you can temper your half-and-half by adding it to your cup first and slowly adding your coffee.

Add just a little coffee to your half-and-half to bring it up to temperature. Once it’s warmed, add the rest of your coffee. If you do this, you shouldn’t see any separation.

Alternatively, if you switch out your half-and-half for heavy cream, you should also be able to avoid any separation.

@TimHortons hi there was curdled cream in my ice coffee yesterday??? pic.twitter.com/2ZwUuUhhRO

Is it OK to drink curdled cream in coffee?

On occasion, you may notice that cold milk or cream added to hot coffee will curdle. Often, we view curdled milk as spoiled milk. That’s only half true. Coffee is slightly acidic. When it is scalding, it can contribute to the curdling of fresh, cold milk.

You may not experience this curdling all the time. It’s just because your coffee is likely not hot enough to cause the milk to curdle.

It could also be that your milk is just on the cusp of going bad. This is when your milk has produced some bacteria, but not enough to curdle in the milk itself.

By adding that bit of extra acid from your coffee, along with the heat, the scales can be tipped to cause your milk to curdle. It may not taste or smell like it’s terrible. But it’s got just enough acid and bacteria to cause curdling when it mingles with the head and acid of the coffee.

As long as you’re not mistreating your milk by drinking out of the carton or leaving it out on the counter, it’s still perfectly safe to drink.

So if you find the texture or looks of curdled milk in your coffee off-putting, let it cool slightly before you add your creamer of choice.

One thing that you don’t want to do makes your coffee with distilled water. Using distilled water strips the minerals that give water its flavor. Flavorless water can lead to tasteless coffee.

To read more about whether you should use distilled water to make coffee, read this recent article.

Powdered coffee creamer looked like a snail this morning. pic.twitter.com/8RWrp5wmjf

But, if you’re finding that your coffee creamer is clumping in its container, there could be a number of reasons it’s doing so.

First, don’t put wet utensils in your creamer. Obviously, this will cause your cream not only to clump up but to grow harmful bacteria.

Also, make sure that you’re storing your creamer in a cool, dry place, and the lid is tightly sealed. If the lid is not tight enough, it could allow moisture to get in the container, causing it to clump up.

If your powdered creamer does get clumpy, there are a few things you can do to unclamp it. You can use a potato masher or a fork to break up the clumps. Then seal it tightly and put it in the fridge.

If it’s super clumpy, you can put it in a food processor to make it powder again. If you don’t want to do that, you can add water to your powdered creamer and shake it well to break up the lumps. Then just use it like you would regular creamer.

If the lumps don’t bother you or aren’t too big, you can just put a lump in your scalding coffee and stir ferociously.

Did I answer everything you wanted to know about the white stuff in your coffee?

The white stuff in your coffee doesn’t necessarily mean that there is anything wrong with your coffee.

If your cream has curdled in your coffee, it’s perfectly fine to drink. Powdered creamer may clump up on you. You can de-clump your powered creamer by using a fork, food processor, or by adding water and using it like you would a liquid creamer.