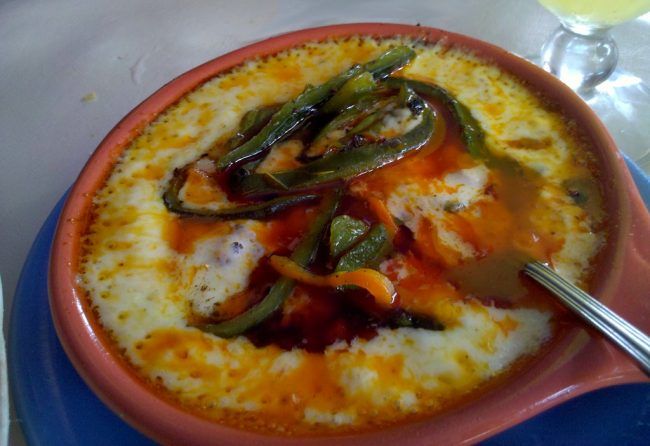 The comal is a very traditional item used in Mexican cuisine, and I’ve owned 2 over the years. While I know how to use them a little, I’ve wondered how to use a comal in Mexican cooking.

Here’s how to use a comal in Mexican cooking:

I love Mexican food! I’ve also been a fan of cooking Mexican food since I had the honor of meeting Rick Bayless in the late 1990s.

If you don’t know Rick, while not Mexican, he is a HUGE proponent of traditional Mexican cooking and an award-winning chef, cookbook author, and TV show host.

But that’s only part of the story, so let’s explore more on how to use a comal. 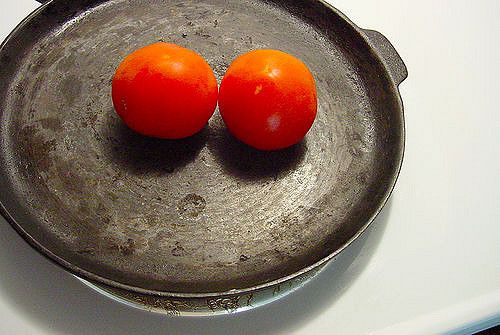 What is a comal?

A comal is a flat griddle used to cook meat, heat tortillas, and roast vegetables. In the US, it is often made of cast iron with a handle. While flat, the cast iron ones do typically have a small lip around the edge. However, in parts of Mexico, Central, and South America it is not uncommon to find ones made of clay.

My first comal was made of clay.

Sadly that got set down on a counter too hard one day and broke.  In the US, it can be very hard to find traditional clay ones. Luckily cast iron ones are readily available at Mexican markets and online retailers like Amazon.

If you’ve never seen one, a comal is like a skillet but with almost no side around the edge; just a small lip. The surface is totally flat and it has a handle.

They are very versatile as they can be used right on a stovetop burner, on a grill or over an open flame, but can also go right in the oven. I would not, however, ever put one in a dishwasher.

Originally an Aztec creation (the Aztec name is comalli), this amazing device predates Spain’s influence in Mexico.  But you also see them throughout Central and South America.

Luckily, if you season a cast-iron comal correctly, clean up happens very quickly and easily.

Ah well. Heating up the comal. Making my own damn tacos. pic.twitter.com/vsn5vVmtQA

How do you treat a comal?

To treat, or season a cast-iron comal, first rub a coat of oil on it, place in a hot oven heated to 350°, and leave for 1 hour. Allow to cool and then wipe dry.

Before you can use your comal, we have to first “season” it. But don’t worry, I get into more detail on those steps below.

This seasoning is actually needed for ALL cast iron cookware. If you were lucky enough to find a clay one, you can skip this part. Clay comals do NOT need to be seasoned.

Then start by coating your new comal with oil. Just pour on a few tablespoons of oil and rub over the entire surface of the comal with a paper towel. Don’t forget the handle and the bottom.

When done, wipe away the excess so there are no puddles of oil; just a fine coating.

Next, we place your comal in a non-preheated oven. Set the temperature up to 350° and leave the comal in there for one hour. Turn off the heat after your timer goes off.

Let your comal rest in the oven and slowly cool down. When cool to the touch, just give the comal a quick wipe with a paper towel.

NOW your comal is seasoned and ready to use. If you ever accidentally leave it in standing water and find it rusted, clean, and scrub thoroughly and repeat the above process from scratch.

Can you put a comal in the oven?

Yes, a comal can go from a stovetop burner or open flame right into an oven. If you are using a clay comal, make sure to place the comal in a hot oven no hotter than 400° to avoid cracking it.

Comals are one of the most versatile cooking items being able to go from stovetop to oven or even over the open flame on a grill or in a pizza oven.

Once seasoned, your cast iron comal truly has so many uses you may wonder how you ever did without one! Clay comals can also go in an oven. 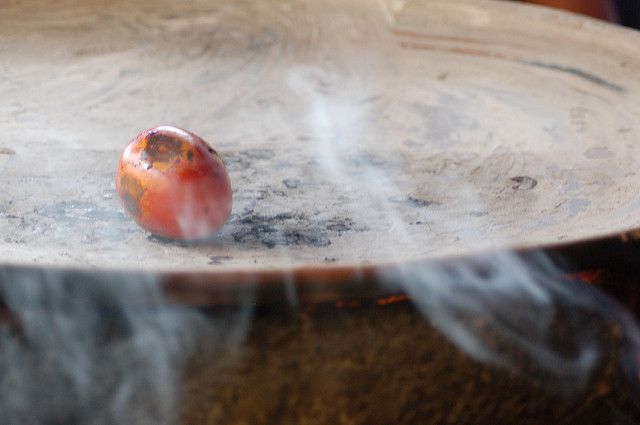 What are Comals made of?

Comals can either be made of clay or cast iron. In the US, cast iron comals are readily available whereas clay ones can be harder to find. Clay ones don’t need to be seasoned like a cast iron one and can be cleaned with soap and water.

Clay comals do work better over an open flame (what they were originally designed for), but you can use them with care on an electric stovetop. 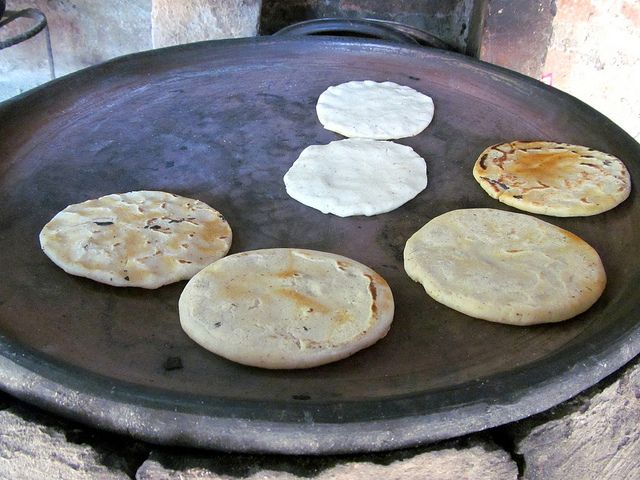 How do you heat a flour tortilla for a crowd?

The best way to heat large quantities of flour tortillas for a crowd is to stack 5 tortillas on a comal on a stovetop, flipping and rotating frequently, or by wrapping about 5 tortillas in foil and placing in the oven at 350° for 15-20 minutes.

But don’t worry, I’ll get into more detail on those methods, plus 1 other method here in a minute.

A large batch of fajitas or make your own tacos are excellent party food for large crowds since it’s tasty, inexpensive, and stays warm without drying out in some chafing dishes.

Heating up a large batch of tortillas is a necessity for large gatherings. Once heated, they get softer and can bend or fold without cracking.

Here are the three best ways to heat flour tortillas for a large crowd or party:

1. On the Stove-Top – Set a stack of tortillas in a clay or cast iron comal (or just a dry skillet) and heat over medium heat. Flip your stack about every 30 seconds and also rotate which tortilla is on top and bottom.

2. In the Oven – Wrap a stack of about five tortillas in aluminum foil and set them in a pre-heated oven at 350°. You can place the wrapped stack on a clay or cast iron comal or just on the rack. Warm for about 15-20 minutes, until heated through. Obviously, in an oven, you can have multiple batches going at once.

3. In the Microwave – Wrap a stack of about five tortillas in a damp paper towel and set on a microwavable plate or clay comal (not cast iron!). Microwave for 30 seconds and flip the wrapped stack and heat for another 30 seconds until the stack feels warm to the touch. Repeat as necessary for the remaining tortillas.

Here are a few other handy tips for tortillas:

How to Use a Comal

Here is a step-by-step on how to use a comal:

As with a skillet, a comal works best if you heat it before putting any food or tortillas on it.

A comal is essentially a griddle, so tortillas are only just the beginning of what you can do with it. Lay down a tortilla, top with some salsa, cheese, and filling of your choice, and top with another tortilla for an instant quesadilla. Just let the cheese melt everything together before flipping.

If you have a larger comal (my cast iron one is only 8″ around), they can be great for grilling fajita meat and veggies (does anything smell better than griddled onions?)

Once you’ve gotten started learning how to use a comal, make sure you know how to clean and care for it. Make sure to not wash your comal with soap, let it sit in water, or ever put it in the dishwasher.

Every time you use it, just scrape off the excess food residue and then rub a light coat of oil onto it.

If it does get wet, don’t use soap and make sure and dry it completely to avoid rust. I like to wipe it down and then set on a hot burner on my stove to dry; just set a timer so you remember to turn it off.

Once dry and cool to the touch, again, wipe on a coat of oil.  If you have stubborn rust stains, you can use a steel wool scrubbing pad, but after rinsing and drying, make sure to wipe on more oil.

Did I cover all your questions about how to use a comal?

In this article, we took an in-depth look into the comal. A comal is a Mexican kitchen staple that has WAY more uses than just heating up tortillas.

We looked at exactly what a comal is, and what they can be made out of. But we also looked at how to season them. And all the different ways you can use a comal in Mexican cooking.

Tortillas, aside, a comal is a great way to grill meats too, such as barbacoa or carnitas after they’ve been slow cooked.

I always hand select items that I either own, have used, or have researched well to ensure they are great items. I also give not only top of the line as well as inexpensive alternatives so my choices work for any budget.

Tortillas de comal by Victor Castro is licensed by CC2.0

link to How to Reheat McDonald's Chicken Nuggets (7 Best Methods)

Continue Reading
link to Does Herbal Tea Expire? (No, so here's how to know if it's bad)

It seems like everything you can purchase at your local supermarket has some sort of expiration date, including your favorite herbal teas. But does herbal tea expire? As a general rule, herbal...