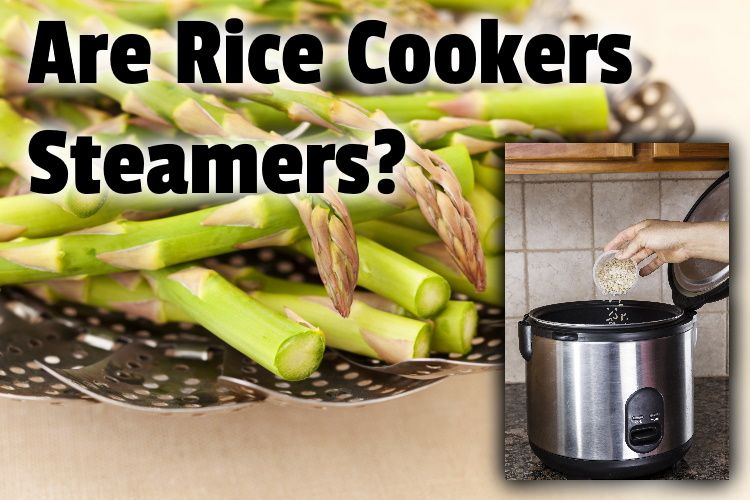 Rice cookers are a great way to get fool-proof rice every time. And they use water to cook the rice. But since they use heated water, are rice cookers steamers?

Here’s what I know from using one:

Yes, some rice cookers do function dually as a steamer if equipped with a steam basket. Without the steam basket or a steam option on your rice cooker, a rice cooker will not steam food correctly.

Let’s dive into the world of rice cookers.

How do rice cookers work?

Rice cookers work by adding a precise amount of water and rice and then heating the water. As the rice cooks, the temperature begins to rise. When the temperature rises above 212 degrees Fahrenheit, the water ceases to boil, and the cooker knows the rice is cooked and automatically shuts off.

You have to pay attention to the amount of water you put into a rice cooker; otherwise, it’ll boil over. Boiling over is the biggest problem people have when they buy a rice cooker, and they tend not to realize that the problem there is human error.

As long as you put enough water to rice ratio, you’ll be fine because of how the rice cooker knows how to cook rice. The rice cooker will be able to tell when the water is done boiling and is absorbed into the rice.

The rice cooker can tell when this happens because assuming you did the right water to rice ratio, the pot should be at a certain temperature once the water is absorbed.

Now at this point, the rice cooker sensed a change in the temperature and will either turn off completely or switch to a warming cycle depending on what your setting is on.

But how exactly does a rice cooker know when the rice is done, especially if it’s something like brown or wild rice?

I have a recent article that further details exactly how the rice cooker knows when the rice is done and why rice cookers are a good fit for your home.

Final verdict: AMAZING!!! 10/10 would cook again! I cooked 3 cups rice with chicken stock and soy sauce in normal rice cooker proportions of rice to liquid. 2 KFC thighs and 1 leg. Good dash of salt. Shredded the skin and meat. Give it a try – it is totally worth it. pic.twitter.com/i2OGJMnnPd

Can you steam vegetables in a rice cooker?

After all, the best and most efficient use of your time is steaming your vegetables or anything else you want to steam at the same time as you cook your rice.

Cooking rice takes about 30 minutes to cook in a rice cooker, and steaming your vegetables will take about 15 minutes. To make sure you have a fully cooked and warm meal with everything done at the same time, place your vegetables halfway through the cooking time of the rice.

Don’t have a basket?

You can always place the veggies on top of the rice halfway through the cooking time with an extra half cup of water, and they will still steam.

The extra water is to make sure the rice produces enough steam to cook the vegetables.

How long does it take to steam carrots or broccoli in a rice cooker?

Ultimately, though, it depends on how you prepare the food and how hard the food is. Veggies typically take anywhere from 5 to 15 minutes to steam with your rice.

That’s why it’s important to plan out when you add your veggies into the rice cooker, so both your rice and vegetables come out at the same time. If we break it down based on specific foods, we still have to take into consideration whether the food is cut up, whole, from a can, fresh, and more so.

The estimated times for steaming veggies and cooking your rice are usually inside your rice cooker’s manual. It’s also going to be trial and error until you get the exact results you want.

Overall though, sticking between 5 to 15 minutes is an excellent idea for veggies. Remember to be careful with how much water you put in your rice cooker.

I have a recent article that talks about why rice cookers boil over, and the main reason is human error and putting too much water in their rice cooker.

Omg. I cooked pumpkin cornbread in the rice cooker and it tastes amazing. pic.twitter.com/LvgzZPTsb4

How do you steam buns in a rice cooker?

To steam buns in a rice cooker, cut out parchment paper according to the size of each bun. Next, fill the rice cooker with a few inches of water (about one and ½ cups) and bring to a boil. Once the water is boiling, place buns in the steam basket and let sit for 13 to 15 minutes.

Steaming buns is a little different than steaming veggies. This is because of the water amount and the fact that you don’t put rice in the rice cooker.

Parchment paper gives the buns a place to rest while steaming and avoids making a mess.

If you’re doing large batches, remember to replenish the water and if you are using more than one tray or basket, remember to switch their positions.

There are plenty of recipes to follow online; simply pick one and try it out. Remember, you may have to adjust your rice cooker’s size and what type of rice cooker you have.

You can also steam buns in an Instant Pot, but cooking under pressure makes some people nervous.

But do they really explode? I have a recent article on the Instant Pot and the truth about whether they are even capable of exploding. And I even tell you what Snopes says about them too.

Just click on that link to read it on my site.

What is the best rice cooker and steamer?

The best rice cooker is the Instant Zest Plus 20 Cup Rice Cooker by Instant Pot. It not only functions as a 20 cup rice cooker, but also a steamer, slow cooker, is programmable, and you can cook without pressure.

If you don’t already have a rice cooker, it can be hard to pick from the large selection. Rice cookers have gained much popularity over the years and show no signs of stopping anytime soon.

When looking for a rice cooker, there are a few things to look out for.

As I mentioned, a steam basket or tray is top of the list if you plan to cook rice and steam and get the most use out of both your rice cooker and space.

While not needed, it’s always handy to have a rice cooker that comes with a few of these preprogrammed options:

Having these options simply makes life easier. You also want to make sure you have a sturdy lid with a great inner pot with a non-stick coating.

Remember to be careful with some non-stick coating rice makers. This is because if the non-stick surface is scratched at all, you have the risk of it flaking and it going into your food.

So why do I like the Instant Zest Rice Cooker the best?

First, it’s an Amazon’s Choice product. It has well over 5,000 reviews and almost all are 5-star. It’s also incredibly cheap; just a little over $60 bucks.

It comes with nine cooking programs, and four extra programs for things like sautéing, steaming, warming, and slow cooking.

But really ANY rice cooker is better than none. They take all the guesswork out of cooking rice.

No more scorched pans or soggy or crunchy rice! If you need a little more convincing on why a rice cooker would be an excellent fit for your kitchen, you can read this recent article I wrote.

It goes over all the benefits and disadvantages of a rice cooker so you can see if it actually fits you and your family’s needs.

Did I cover everything you wanted to know about rice cookers being able to steam?

In today’s article, we talked about steaming veggies and meat in your rice cooker.

Rice cookers are a great small appliance for your home, especially when you want more than one use out of an appliance.

Make oatmeal, rice, steamed veggies or meat, and so much more. It takes just a little bit of creativity to find a new cooking method that you’ll love.

Yes, steaming vegetables in a rice cooker are completely normal and easy to do. Ensure you have a steam basket and be aware of how much water you put in your rice cooker. Don’t forget to check out a multi-use cooker to save even more space in your kitchen!

Remember to stay safe while cooking and enjoy your food!

Continue Reading
link to How Long do You Have to Wait to Put Food in a New Fridge?

There's nothing quite like getting a brand new refrigerator. Especially if it's a nice new one compared to your old one. But while you might be tempted to just load up the new one after unboxing,...