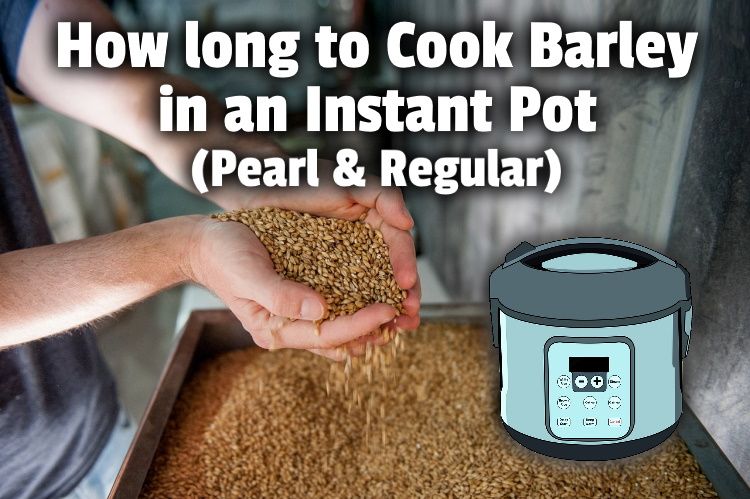 Barley is a nutritious grain that you can use in a number of ways. But like many grains, it takes a long time to cook. But if you have an Instant Pot, you’ve probably wondered how long to cook barley in an Instant Pot.

Either way, avoid the quick release and use the natural pressure release.

In this article, we’ll explore a couple of important things: we’ll find out the difference between quick and pearled barley, which is better: hulled barley or pearled barley, and if you can overcook barley. But we’ll also explore if barley is supposed to be chewy.

The water ratio varies slightly depending on the different types of barley as well. Use 2 cups of water (vegetable broth or chicken stock) per 1 cup of pearled barley. Then use 2.5 cups of water (or broth) for 1 cup of hulled barley.

Is there a difference between quick barley and pearl barley?

The difference between quick barley and pearl barley is that quick barley has been steamed before being packaged. Like pearl barley, it has had the outer layers removed. Quick barley takes just about 10 minutes on the stovetop since it has been pre-steamed.

Don’t try and cook quick barley in an Instant Pot as it can get mushy very fast.

Pearl barley is barley that has been processed: “pearled” — polished. This is why it looks shiny, resembling large grains of rice. Its hull and some or all the outer layer of its bran have been removed.

If it’s been heavily polished, it has a white color and becomes smaller, and it’s tan/yellow colored when it’s been lightly polished.

Quick barley, on the other hand, almost always looks the same irrespective of the type of barley it’s been made from. It looks rugged and flaky, not a “pearled” look.

It can be made from other types of barley, but most of those commercially available are made from pearl barley.

Which is better: hulled or pearled barley?

Hulled barley is more nutritious than pearled barley as it is whole grain. But as with rice or bread, many will prefer the lighter texture of pearled barley where the outer husk has been removed.

Pearl is probably the most common type of barley. Its outer husk and fiber-containing bran layer have been removed, and it has been polished. Therefore, it is less nutritious.

The endosperm layer of barley is the bulk of the kernel. It contains minerals and vitamins.

Hulled barley is different because it has a light golden brown color, and it’s nuttier, but it takes a while longer to cook. You can get them from grocery stores.

Truth be told, both are good, and pearled barley is not as nutritious. Hulled barley is chewy and rich in fiber and phytonutrients. And seeing as it is whole grain, it is the healthier option.

In point of fact, hulled barley has the highest fiber content relative to all other whole grains. Diets rich in whole grains have been correlated with a lower risk of chronic diseases.

One could argue that ultimately, which one is better has to be decided on a case-by-case basis depending on your recipe. Most recipes specify pearl barley, but a substantial number state that hulled barley should be used.

And, there are recipes where either one may be the way to go.

In other words, you can substitute one for the other. Both pearl and hulled barley are essentially the same types of grain. It’s the way they’ve been prepped that differentiates them. Remember to store them in an airtight container.

Can you overcook barley?

Barley can be overcooked. Barley should be slightly chewy with a nutty flavor. So the desired texture is firm but tender. Hulled barley cooks longer, but the final texture should still be the same as pearled barley.

And as with most other types of grains, uncooked barley can be really easy to overcook in an Instant Pot (or any electric pressure cooker).

The truth is that one can overcook any meal, and barley is no exception. How long to cook it for would be influenced by what you want to use it for and your personal preference.

To cook the perfect barley, use a colander to first rinse it and remove debris and grit that could be in it, especially if you bought it in bulk. Ideally, you do this above the sink, but you can also do it in a bowl of water.

Add salt to boiling water and then add in the barley. Cook it the way you would cook pasta. If it’s hulled barley, remember, it would take a bit longer to cook because of the bran around it.

The upside of cooking it like pasta is that you would be able to shave off 10 to 15 minutes off the time and consequently reduce the risk of overcooking it. It is the easiest way to cook barley.

If you’re pressed for time, you may want to use a slow cooker.

Another serious concern you probably entertain is whether Instant Pots can explode. It’s concerning, right?

In a recent article, I revealed whether Instant Pots are safe, if regular pressure cookers explode, the difference between an instant pot and a regular cooker, and what happens if you overfill an instant pot.

Is barley supposed to be chewy?

Barley is supposed to be chewy but not tough. It should have the consistency of cooked brown rice. The key is to ensure the correct cooking time, which will vary slightly depending on whether regular (hulled) barley or pearl barley is used.

It can be unreasonably chewy, even a bit tough if it is undercooked, and mushy if it is overcooked. When it has been cooked properly, it is tender and chewy. But your recipe might call for something a tad different.

So, in some cases, maybe you will prefer something that’s very tender. Depending on your recipe, when barley is done, there may still be a little bit of water.

They can be used for cooking barley and other stuff. In fact, they are a kitchen staple. But are Instant Pots worth it?

I looked into it and wrote up my findings in a recent article where I explained what an instant pot is and how it works, what makes an Instant Pot great, and how long it lasts. But I also revealed if an Instant Pot is the same thing as a pressure cooker.

What is the ratio of water to barley in an Instant Pot?

The water ratio is critical to avoid mushy barley and get that perfect chewy texture.

Excess water will ruin your barley, so make sure you have just enough water. Then make sure you set the cooking time correctly. As I mentioned above, for most Instant Pot recipes, you’ll do 20 mins for pearled barley or 25 mins for hulled barley.

But can you boil water in an instant pot?

4 color Bowl with #Mochimugi base. Pop texture of #Barley does not go mushy in a source, enjoy till the last. pic.twitter.com/LpGNehBmNm

Why is my Instant Pot barley mushy?

As a general rule, Instant Pot barley would become mushy if overcooked and/or if too much water was used. Ideally, barley should be chewy but tender to taste. So, ensure the proper cooking time and water ratio and avoid using instant barley or quick barley in an Instant Pot.

Of course, sometimes adding certain ingredients to your barley and water in the Instant Pot could also make it potentially mushy. So, avoid other types of liquids, such as olive oil. And don’t add things like parmesan cheese while cooking. That can be sprinkled on after it’s done.

And don’t presoak your barley unless the Instant Pot recipe calls for that.

You’ll be left with the perfect texture to this awesomely healthy grain!

Let’s quickly recap what we reviewed and learned. We found out the difference between quick and pearled barley, which is better: hulled barley or pearled barley, and if you can overcook barley.

Quick barley has been pre-steamed and dried. Naturally, it is fast-cooking. Hulled barley is richer. Yes, you can overcook barley.

But we also explored if barley is supposed to be chewy. Yes. Then, we looked at the ratio of water to barley in an Instant Pot. Three to one. Lastly, we wrapped things up by considering why an Instant Pot of barley is mushy. You probably overcooked it.

link to Instant Pot 3qt vs. 6qt: Which Size is Best for You to Buy?

Instant Pots can be life-changing. But if you’re in the market to buy a new Instant Pot or even your first Instant Pot, it can be easy to get overwhelmed with the choices. So, what is the best size...

Continue Reading
link to Can an Instant Pot Explode? What You Need to Know!