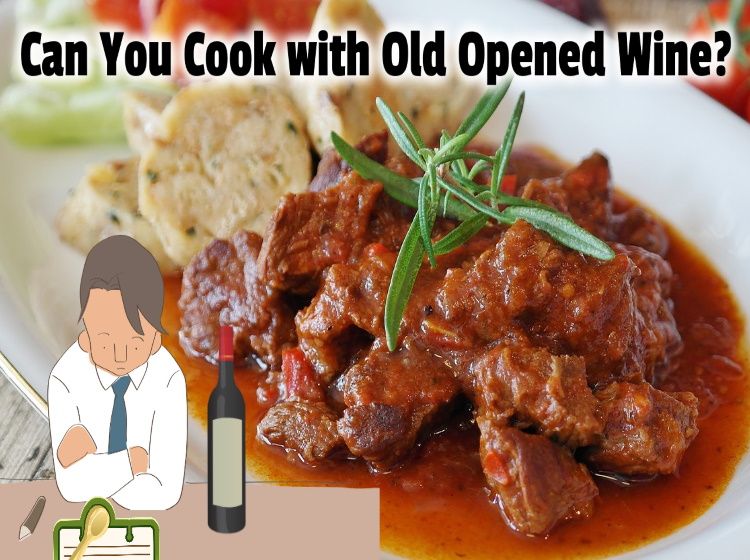 My wife and I almost always have a bottle of opened wine in the house. Occasionally they sit for too long and taste sour, but I’ve wondered can you cook with old opened wine?

While some insist you shouldn’t cook with wine you wouldn’t drink, it’s OK to use opened wine to cook with. Store in the refrigerator up to 2 months. It’s also OK to blend different reds with each other or whites. However, the more it sits after opening, the closer it gets to vinegar. So adjust as needed for acidity.

But there’s more to know about cooking with old wine and how long wine takes to go bad.

So in this article, we’re diving deep into the world of opened wine, what they call “corked” wine, and whether it’s OK to cook with wine you might not be OK with drinking.

So let’s get going!

How long can you keep opened wine for cooking?

Oxygen is the enemy of wine. Once you crack open a bottle, even with those fancy vacuum-sealing rubber corks, you still probably want to drink that wine within a few days.

After 3 or more days once opened, the wine will start to get more acidic. It will have a sharpness or tartness on the tongue that wasn’t there before.

But how long the wine is decent varies by the type of wine.

Now, of course, I’m talking about traditional red and white wines for drinking. Things like port, sherry, or Madeira are what’s known as fortified. They have a much higher alcohol content (which is why some states have to sell them at liquor stores) and a much higher sugar content.

The combination of sugar and alcohol act as a natural preservative and make those wines last much longer. Store them in the refrigerator for an even longer shelf-life.

But for regular wines for cooking, how long is too long once they’ve been opened?

I had a friend who was a wine-snob who was fond of saying “you should never cook with a wine you wouldn’t drink”, and to a degree, I think that’s true.

But for those of us in the real world, I don’t think we’re plopping down 20 bucks for a bottle of wine just to cook with every time we make a meal.

I consulted a few experts on this matter, such as Bon Appétit, and the general consensus among the pros is that you CAN use old opened wine for cooking under the following criteria:

Love making risotto and either are out of wine or are worried your opened bottle is too far gone?

No problem! A recent article I wrote walks you through step by step exactly how to make risotto without wine and still get amazing results! I was particularly impressed with how just adding 1 ingredient can give you that wine flavor with no alcohol whatsoever!

Here is what we have opened so far. pic.twitter.com/EMcSZleYQr

How long can you keep red or white wine for cooking?

Personally, I find red wine “turns” faster than white wine once I crack open a bottle.

It’s also true to my taste buds that red wines sometimes need to “breath” a minute once opened before drinking, whereas I don’t find that to be as true of white wines.

But I’m not a wine expert, just a guy who has bought and drunk a fair amount of wine over the years and not only cooked with it a lot but in my 2 decades with Whole Foods, I’ve also been around a lot of wine people.

Wine is made by fermenting different types of grapes. Despite what some may think, red and white wines often use the same types of grapes, but leaving the grape skins in the batch gives red wine its distinctive color.

The shelf life of wine depends on a number of different factors, such as:

And more. That being said, even narrowing down to just red wines or white wines, there isn’t a one-size-fits-all answer for how long red wine lasts once it’s been opened; even for cooking.

Here’s a handy chart, though, courtesy of EatByDate that breaks down some simple rules to follow for wine expiration. It’s more for drinking than using for cooking, but it still gives us some good insight.

But as a general rule for cooking, keep it in the fridge and use within 2 months and always taste and adjust the acidity in your dish before serving.

How do you know when wine has gone bad?

Wine can go “bad” a few different ways, so let’s review the most common:

This typically happens when the cork used fails in some way. It’s also a reason that some nicer wines these days are moving to screw tops which used to just be for “cheap wines”.

Corked wine, more specifically, means the wine has been contaminated with cork taint.

It’s caused when a chemical compound called TCA (2,4,6 – trichloroanisole) comes into contact with bleach or other sanitizing chemicals a winery might use.

How that happens is that “real” corks naturally contain fungus, but they react strongly with chlorides like the cleaning chemicals contain. These days, most wineries avoid using bleach or other similar products to clean with as cork taint can spread like bacteria and infect other corks or maybe even a whole winery.

If you’ve ever opened a bottle of wine and thought it tasted “off immediately after opening, it was probably corked.

Luckily, corked wine isn’t harmful, but it doesn’t taste good. It will taste dull, lifeless, and have a musty smell similar to a pile of cardboard that got wet and was allowed to sit. It’s estimated that up to 8% of wine bottles are corked, but again, that won’t apply to screw-top bottles.

It is great to be pleasantly surprised! This 85 Henri Rebourseau #mazischambertin w low fill cd have been oxidized but it turned out to be beautiful, silky & sweet! #love mature #burgundy #wine pic.twitter.com/jykszcSKGf

Sometimes winemakers intentionally expose grape juice to oxygen to enhance certain flavor characteristics. When used in that context (as a good thing), the terms oxidative is what’s commonly used.

But an opened bottle of wine you just have sitting on your counter in the kitchen is starting to oxidize. If you did nothing and just let it sit there, it would eventually turn into vinegar.

The reason for that is when wine is exposed to air for too long, the oxidation happens to such a large degree that the acetaldehyde present in the wine turns into acetic acid. The result is that you now have homemade wine vinegar (not necessarily a bad thing).

We talked about corked wine above, but sometimes a cork isn’t infected with cork taint, it just fails. And when that cork fails it can let oxygen into the wine while still unopened.

An oxidized wine (both red and white) tend to lose color as well as flavor, and the longer the oxidation continues, the tarter the wine will taste.

Cooked wine is simply wine that has been heat-damaged by being stored at too high of a temperature.

If you have ever been to a winery, bought a bottle, and drove around with it in your hot car on a hot day and then later wondered why it didn’t taste as good at home; it probably got cooked.

Even temperatures as moderate as 75° can damage a wine.

It’s also the reason most wineries won’t ship to certain places during summer months. Another tell-tale sign is when the cork is really hard to get out. Remember high school science class; heat causes things to expand, and wine bottle corks are no different.

If your wine bottle was unknowingly cooked, that cork may have expanded and is now really hard to get out.

Flavor-wise, a cooked wine will literally taste like it’s been cooked or stewed. The flavors will be muted and less vibrant. And the color often gets more muted. It could even have a slightly burnt sugar taste.

This handy cheat-sheet courtesy of Laurel Ridge Winery breaks it down simply. Can you get food poisoning from wine?

Probably not is the short answer.

Food poisoning happens when you eat or drink something that has been contaminated with a virus, bacteria, or parasites.

The common food-borne bacteria which often leads to food poisoning are staph or E. coli.

In most cases, these are caused by undercooking food, improper food handling (not washing hands or poor cleaning of the food prep area), or contaminated water. Symptoms of food poisoning can include diarrhea, fever, and nausea.

I can also tell you from my 2+ decades at Whole Foods and countless food safety training classes that most people really don’t know anything about food poisoning. They assume that whatever they ate most recently is what caused it, when in fact, food poisoning often can take 24 or even 48 hours to kick in.

So don’t focus on what you just ate, and instead go back a meal or 2 to find the culprit.

But with wine, in the vast majority of cases when the wine is corked, cooked, or oxidized it just won’t taste good. You won’t get sick from any of those things.

That’s because oxygen, heat, and the fungus in cork (which is naturally present in all cork) won’t lead to foodborne illnesses like staph or E. coli.

So bad-tasting? Yes. Make you sick? No.

Did I cover everything you wanted to know about whether you can (or should) cook with old opened bottles of red or white wine?

In this article, we took a look at the world of wine and cooking.

Specifically, we dove into how long wine takes to go bad after you open it. But we also explored how to tell when wine has gone bad and does it reach a point where it’s gone too far even to cook with.

Ultimately, we answered the question of can you cook with old opened wine?

The answer to that is a resounding maybe. It depends on how old, how aged (oxidized) it’s gotten, and what you’re making. After all, if your dish also calls for white wine vinegar and your white wine has turned pretty sour, it may work to use the wine and just cut back on, or eliminate, the vinegar.

But don’t worry if you’re just getting started. We cover all the bases in the article above.

What’s your favorite bottle of wine and do you cook with it?

link to Why is There White Stuff in My Coffee?

Sometimes when I brew my coffee, I’ve seen small white specks floating in my coffee. While I can remove it easily enough with a spoon, it got me wondering about how and why is there white stuff...

One of the most popular things to include in the keto diet is cheese, thanks to its high-fat content. But not all cheeses are created equal. So that raises the question: is Feta...