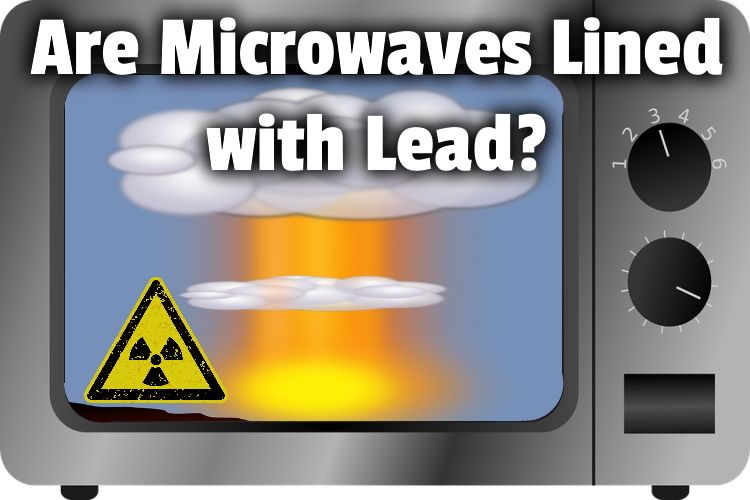 Microwave ovens have had their critics since they first were introduced. Among other complaints, one of the top concerns is often the question are microwaves lined with lead?

Here’s what I know from looking into it:

Lead is not used in the lining of microwaves. The interior of a microwave is made from stainless or galvanized steel coated with enamel. None of that involves lead in the manufacturing process.

But having lead inside them isn’t the only safety concern people have with microwaves.

So in this article, we’ll look at all the top safety concerns, explore where rumors, stories, and urban legends come from, and dive deep into the world of microwaves. That way you can make an informed decision as to buy one or keep the one you have.

Were microwaves ever made with lead?

Microwaves have never had lead linings or had lead used in the manufacturing process. The exterior is typically a 1-piece wrap-around aluminum shell, with stainless or galvanized steel parts used on the interior, typically coated with enamel (which is not made from lead).

In fact, lead in manufactured electronics has been banned in Europe for many years, and while there is no ban that exists here in the U.S. yet, many large manufacturers are phasing out parts with lead.

There is no denying the dangers that have been discovered over the years when it comes to lead exposure.

Many people may fear that their microwave ovens are lined with lead. After all, lead aprons are used in most doctor’s offices to protect against radiation when taking x-rays. However, what may be a decent protective barrier on the outside of the body isn’t necessarily safe for what goes inside your body.

Microwave ovens also use a different type of radiation than most people think.

“Radiation” is often believed to be a bad thing, bringing up images of nuclear bombs and cancer, which are both results of man-made radiation.

However, microwaves use a safer type of radiation that doesn’t have enough energy to cause the biological damage most people fear.

There is a common misconception that foods cooked in the microwave are less nutritious.

Some even think they are genetically altered because of the radiation present and the chemical reactions it causes. However, unless you are heating your food in a container that contains lead, BPA, or phthalates, there is really very little to worry about.

What are microwaves lined with?

The casing and lining of a microwave oven are made out of galvanized or stainless steel, which is then coated in acrylic enamel to give it a more aesthetically pleasing look.

So, if microwaves aren’t lined with lead, you may wonder what prevents the radiation from escaping and what microwave ovens are actually lined with.

Microwaves are lined with metal because it is an essential component of a microwave oven’s function.

The radiation used to cook your food bounces off the metal walls in order to fill the inside of the microwave oven and cook your food. There is also a mesh wire “cage” that keeps the long microwaves inside the chamber and prevents them from escaping through the glass.

So where did the rumor come from that microwaves were lined with lead?

The most likely source of that rumor stems from heating food on lead-lined plates, and a study that revealed how lead in plates or cookware could leach into food when heated in a microwave.

Most ceramic dinnerware, bakeware, etc from 1950 and earlier were often made with lead.

A study published by the National Library of Medicine found that the “use of such dishes to microwave common foods could result in the ingestion of dangerously large amounts of lead.”

So if you have dinnerware or plates you inherited from your grandmother, or have a love of vintage kitchenware, do make sure to not use that in the microwave.

@PLenkov @macgyveronline so I found a discarded microwave oven door…. Why would anyone throw away a perfectly good Christmas party platter or dish up plate? #macgyverit pic.twitter.com/kc44sXYRci

Should a microwave door be left open after use?

There are a lot of mixed opinions on whether the door to the microwave should be left open after use.

Some believe that you should keep it closed because it will let residual radiation escape, exposing you and others to unnecessary harmful rays. But there’s no scientific basis for that concern.

That issue centers around EMF, or electric and magnetic fields.

And microwaves do indeed emit EMFs! However, EMFs break down into 2 categories:

The good news is that microwave ovens use non-ionizing EMFs, and are pretty much harmless.

And between the EMFs put off by microwaves and cell phones, lots of studies have been done at the point, but they pretty much all “show no evidence of a link between EMF exposure and adult cancers” (quote from the National Institute of Environmental Health Sciences as linked above).

So don’t close the door out of fear of EMFs.

Others believe you should leave it open to allow it to cool down completely before your next use. There is no real right or wrong answer to this.

But why not keep it closed? Unlike a conventional or toaster oven, the microwave doesn’t stay hot as long after use.

It is also a good idea to keep the microwave door shut after use because the light stays on when the door is open. This unnecessarily burns out your bulb quickly, which is an added cost you may not want to deal with.

Great #UX detail on this old microwave oven: The arrow-like protrusion not only indicates which direction to turn, it also almost forces you to grab the handle the ”right“ way for turning clockwise. pic.twitter.com/PfXleS4lJH

The technology in old microwave ovens remains safe, especially ones made after 1971, but the door seals in older ones could create a safety hazard if they are worn, broken, or missing altogether.

Technology has gotten better over the years.

This is very obvious whether you are looking at the advancement of TVs, the invention of cellular phones, or the progression of the microwave.

Manufacturers are always working to improve what we have access to today.

They are also continually testing new and old materials, discovering things that were once used that they now know may cause a health risk, or switching to more cost-efficient materials.

Certain federal regulations were made in October 1971 for microwave oven manufacturing.

These regulations limited the amount of radiation leakage to 5 milliwatts per square centimeter at about 2 inches from the oven’s surface. It also required double interlocking switches that stop the oven’s operation when the door is opened.

That being said, this doesn’t mean all microwave ovens prior to 1971 are unsafe, and it also doesn’t mean that all of them made after are. It really depends on what condition they are in.

There are a lot of safety features in newer microwaves. The seal around the door, the metal lining, and even the heating components have been improved over the years to ensure that you and your household are safe.

With an older microwave, some of these parts may be worn out. It may not be as safe as it was when you first purchased it.

If the seal around the door is damaged or doesn’t work properly, some of the radiation may escape, which can increase your risk of exposure. But honestly, the biggest risk you face would most likely be a fire.

If the heating element is bad, and if you are heating up food like popcorn or potatoes, you may be at risk of starting a fire in your microwave.

Worried about microwave oven radiation? Overheating and fires are much greater risks. Keep vents clear and the inside clean #healthandsafety pic.twitter.com/k36DqbucE2

What is the best microwave for those concerned about health?

The best microwave for maintaining the quality of the food, and addressing health concerns is the Panasonic Microwave Oven NN-SN966S.

It has well over 3,000 reviews, and almost all of them are 5-stars! It’s also an Amazon’s Choice product too. It’s high-powered with an oversized interior for large family meals. 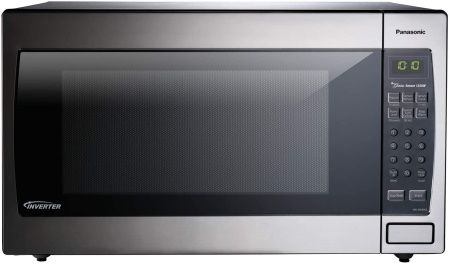 But its Genius Sensor automatically adjusts cooking power and time based on the foods being cooked.

And it even has a keep warm feature; great for making side dishes ahead of time for large gatherings!

There are so many people these days who are concerned about health and safety when it comes to microwaves.

Some may believe that toaster ovens are healthier than microwaves, but according to a recent article of mine, this is not the case. But in writing that article, I did actually find one really cool toaster oven/microwave combo!

It’s not the radiation that makes microwaves unhealthy; it’s cooking food in general. Most cooking methods deplete nutrients, but surprisingly, microwaves lose less due to the faster cooking method.

Instead of just relying on microwave technology to heat food, this microwave also uses safe steam to heat food evenly and all the way to the core, so you don’t have the issue of a cold and undercooked center.

This microwave also has a unique feature that keeps your food – like soups, gravies, and desserts – warm until you are ready to enjoy them.

Hopefully, this answers all of your questions about the safety of microwaves.

There is no lead in the lining of the interior, though there is a metal that helps the waves bounce around and cook your food. The radiation used in microwave ovens is also safe since it is very different from nuclear radiation.

If you are concerned about radiation in microwaves, you could always go with a toaster oven. However, you will miss out on the speed and inconvenience of a microwave.

If you are brand new to owning an air fryer, you will be surprised to find that it gives off a “plastic-like” scent every time you use it. So here's how to get rid of air fryer plastic...