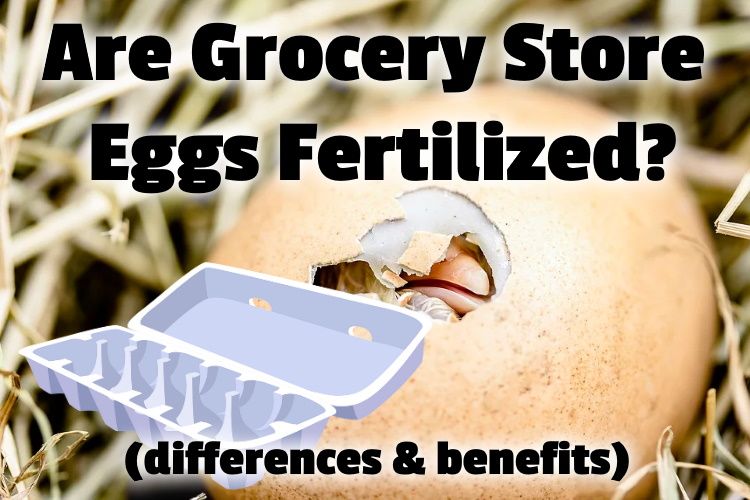 I’ve bought eggs from a farm, but usually, I buy them from a grocery store. So I’ve wondered are grocery store eggs fertilized?

But there’s a lot more to know about fertilized eggs!

Lastly, we’ll also answer some of the most common questions about grocery stores and fertilized eggs.

What is the difference between fertilized and unfertilized eggs?

We all know that chickens lay eggs.

Well, technically only female chickens which we call hens, lay eggs. Now, with human beings, unless science gets involved, it takes a man and a woman to conceive a child.

With chickens, however, they can lay eggs whether or not a rooster is around.

So, quite simply, fertilized eggs are the eggs laid by a hen, after mating with a rooster. If the hen lays eggs having not mated recently, those eggs are NOT fertilized.

Generally speaking, eggs laid within a week of the rooster mating with the hen will be fertile.

So will all fertilized eggs hatch?

It depends. For starters, if the eggs have been kept in the fridge, it’s much harder to hatch them. If you do want to try that (many have found success hatching the fertile eggs from Trader Joes), bring them to room temp before placing in the incubator.

Typically, eggs need to be incubated within 7 days of being laid and then kept in the incubator for 21 days before they will hatch.

If you go back 100 years before the dawn of trucking, factory farms, and large chain grocery stores, most of our ancestors ate fertilized eggs.

After cars replaced wagons and larger stores began to pop up and the demand for eggs to be shipped from one location to another came into play, most farmers got rid of the roosters.

Because roosters require feed and medical care but don’t really provide any improvement to the eggs. Being fertilized doesn’t make for larger eggs, more nutritious eggs, or help the chickens lay more eggs.

In short, the roosters were just an expense that didn’t provide any profit for the farmer, so they were phased out of the egg business by most farmers.

Are the eggs we eat fertilized?

Most of us these days buy our eggs at a large grocery store chain. Those stores, in turn, often buy their eggs from some of the large egg suppliers in the US (and other countries if you’re reading this outside the US).

Those huge egg companies include:

Because those egg companies are like large factory farms, the hens laying the hundreds of thousands of eggs each week are not kept around roosters. So they are not mating, and the eggs they lay are not fertilized.

That being said, most large grocery stores, and especially stores like Whole Foods, will carry some brands of fertilized eggs.

These brands will be more expensive and will be clearly labeled as fertilized eggs.

They are more expensive since they are usually very small farms compared to the huge mega-companies I listed above. Being a small operator, they have limited resources and smaller profits. So they are typically more expensive.

Some of the best-known brands of fertilized eggs include:

Can you hatch an egg from the supermarket?

Yes, but it’s usually much easier to buy eggs from a egg hatching supplier or local farm.

For starters, eggs in the store have likely been kept cold (even though that isn’t technically necessary from a food safety standpoint).

And if the store (or delivery truck or warehouse) kept them too cold, any embryo inside the shell will have been killed off.

The cold inhibits (but doesn’t fully prevent) your ability to hatch an egg. And you should bring them to room temperature before placing them in the incubator.

For another, they are likely too old.

Once eggs get past the 2-week mark, the ability to hatch them goes way down. If your brand of fertile eggs has a pack date, that’s a great gauge to tell if they are new enough to try hatching.

Some egg brands, however, use a Julian dating system (just to complicate things).

Julian dating simply tells you the day of the year they were packed on. So Jan 1st is 001 and December 31st is 365. So you have to do a little math to figure that out.

Can an unfertilized egg hatch?

The primary reason most supermarket eggs can’t be hatched is that almost all eggs sold in supermarkets are not fertilized eggs.

No rooster mating with the hen, no baby.

So there’s biologically no way for a chicken to develop inside the eggshell. Unless you see the carton labeled “fertile” or “fertilized” they are NOT going to be fertile eggs and will not hatch.

How do farmers know if a chicken egg is fertilized?

Generally speaking, hens lay fertile eggs for about a week after mating with a rooster.

So farmers have to know exactly when the roosters are mating with the hens. Most do this by ensuring the roosters are kept separately from the hens. Then when it’s time to mate, they are mixed, and the farmers will make sure to note when the mating happens.

Any eggs laid within a week of that will likely be fertile.

But farmers also can tell fertilized eggs from unfertilized ones by doing something called candling. When candling, you hold the egg up to the flame of a candle so you can see the embryo. You might also notice blood spots too.

In candlelight, the shells of fertile eggs will also be more opaque or transparent.

Of course, in modern times, you can buy special lights to replicate candlelight specifically for this purpose. But no reason you can’t use a candle also.

Like everything in nature, it’s not an exact science. So it IS possible to buy a supposedly fertile egg and not be able to hatch it.

Not necessarily. Egg color is determined by the breed of chicken.

So whether it’s brown, white, or some other shade, there’s no correlation between egg color and whether or not an egg is fertilized. For that matter, egg color has no bearing on nutrition or flavor either.

So if there’s no difference why do some people eat them?

Great question! I think these days, and really for the past few decades, there has been a growing push to eat more naturally. That has lead many to seek out food with fewer additives, preservatives, artificial ingredients.

That’s what paved the way for stores like Whole Foods and why they dominate the market.

People want to eat more the way we ate before the modern push for convenience changed how we make, buy, and eat food. Fertilized eggs just naturally sort of fit in with that mentality.

But there’s no evidence to support that there’s any benefit to eating fertilized eggs.

In a blind taste test, you would be unable to detect any flavor difference between a fertile egg and a non-fertile one; even if you ate it raw.

Like I said in the section directly above, the idea of eating fertile eggs was driven by the natural foods movement that sprang out of the 1970s and 1980s where there was a big push to get back to raising, processing and eating food the way our ancestors did before all the modern conveniences started to take over.

But there is no flavor difference and no nutritional difference between fertile and unfertile eggs.

Free-range refers to allowing the hens to roam somewhat freely rather than being kept in cages. So in and of itself, free-range has NOTHING to do with whether or not the eggs are fertile.

The free-range movement came about after animal rights groups pointed out how inhumane the conditions often were in factory farms. It was common to cram hundreds of thousands of chickens into small cages and snip their beaks to make it easier for the workers and to maximize profits.

And they also can’t just be left in a pen as predators like raccoons and foxes would get them. But they aren’t kept in tiny cages and do get some access to roaming free.

No doubt there may be some brands of eggs that are both free-range AND fertile. But the 2 things have nothing to do with each other.

Again, as with free-range, organic and fertile are 2 different things that have nothing to do with each other.

Organic means the chickens are fed organically grown feed that has been certified organic. There are also organic standards regarding not adding hormones or antibiotics to the chickens (or the feed).

So again, while there very well could be eggs that are both organic and fertile, those 2 things have nothing to do with each other.

Do you struggle to peel hard-boiled eggs easily and without the egg looking like the surface of the moon?

In a recent article, I break down all the best ways to peel hard-boiled eggs perfectly, every time! What really surprised me was how much baking soda helps!

Did I cover all you wanted to know about fertilized eggs and whether the ones at the grocery store are actually fertilized?

In this article, we took an in-depth look at the world of fertilized eggs.

We explored the benefits and differences of fertilized and unfertilized eggs. But we also answered questions like “are organic eggs fertilized?”

Ultimately, we answered the big question of are grocery store eggs fertilized?

Don’t forget to check out my Recommended Products Page (click to see my page) which breaks down all the best choices by category.

I always hand-select items that I either own, have used extensively, or have researched well. That way, I can ensure they are great items. I also give not only top of the line as well as inexpensive alternatives so my choices work for any budget.

Just click that link to see that page now on my site.

Cooking rice and making it into your meal has been part of many cultures and households for a long time. But if you're used to cooking rice on a stovetop, you've probably wondered what makes a...

Continue Reading
link to Can You Use an Extension Cord on a Traeger Grill? (Yes, if . . . )

If you just got a Traeger grill, or even if you’ve had it for a while, you may decide you want to move it further away from the outlet. After all, it's not safe to be right up against a wall....