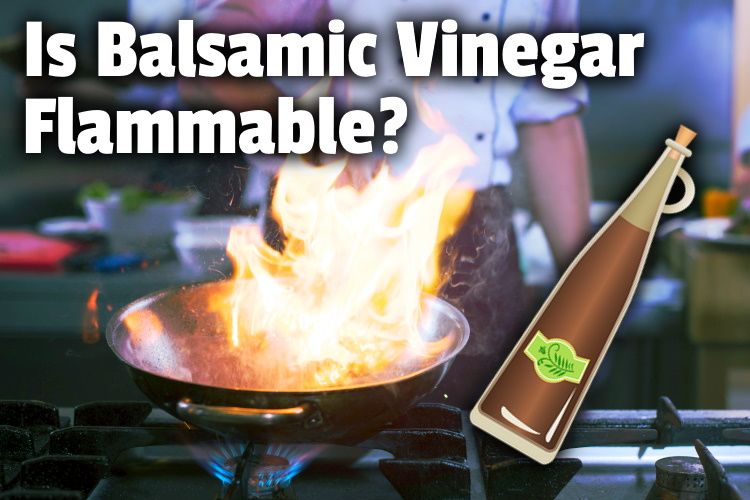 Vinegar is basically sour wine. It’s produced when the wine is mixed with acetic acid, which ferments the wine into vinegar. But since some alcohol can be caught on fire, is balsamic vinegar flammable?

Balsamic vinegar is not flammable. This is because it’s mostly made out of water. However, the primary ingredient before dilution is acetic acid, which is flammable when concentrated enough.

This applies to both balsamic and apple cider vinegar as well.

Fun fact: Vinegar’s name comes from the French word vin aigre, which means sour wine. In this article, we’re going to talk about different types of vinegar and whether or not they are flammable.

And if you’re wanting to flambé with vinegar, we’ll get into that too.

Can you flambé with balsamic vinegar?

Flambé is another french word for “flamed”.

Flambé is the process in which one puts liquor into a hot dish, usually in a pan, which then causes a burst of flames briefly. This technique is mainly for show. When trying this, remember to keep the dish away from other flammable objects.

Most chefs will heat the alcohol in a saucepan before adding it to the flambé pan as cold liquor will have less chance to set on fire. This is because warm alcohol releases more vapors into the air, which equals more flames.

Now, if you aren’t a fan of alcohol, you may be thinking, is there another way to do this?

Indeed, flambe does not burn off all the alcohol in a dish though the primary purpose is to leave behind the taste of the alcohol while burning most of the actual liquor off.

Balsamic vinegar is an alternative if you do not want to use alcohol but to get a Flambé-like flavor. This is only true for flavor though, not the actual flambé.

If you are against alcohol flavors, then flambé wouldn’t be for you anyway. Most flambé is made with brandy or rum for the flavor.

You can use balsamic vinegar for flavor but don’t expect any flames to come from it. I even have a recent article that talks about the benefits of using balsamic vinegar. This way, you know when to use it and how it helps flavor your dish.

I am cooking chicken with balsamic vinegar on This Morning, ITV in 5 minutes xx pic.twitter.com/QLlcSH8Oft

Is it safe to heat balsamic vinegar?

It is safe to heat balsamic vinegar as it will not catch fire due to the high water content. The biggest danger in heating vinegar comes from boiling it at too high of a temperature and having the acetic acid becoming corrosive and damaging the cookware.

Boiling vinegar can actually be used as an excellent deodorizer for a room.

That being said, just boil at a slow boil, and not at a full, rollicking boil. You should also avoid putting vinegar and alcohol together, as this will create unpleasant reactions between the two.

It’s important to say that this is mainly when using undiluted vinegar.

But don’t worry because the kinds of vinegar in stores are great for pairing with marinades, dressings, and even making pickles!

If you are worried about heating vinegar or boiling it, simply make sure to have plenty of ventilation, and always keep an eye on what you are boiling or heating up. The rule applies to more than just vinegar.

Always be safe and never leave your cooking food unattended in the kitchen.

Can you heat balsamic vinegar?

Balsamic vinegar can be heated without issue, either by adding into a pot or skillet with other foods or by bringing to a gentle boil to reduce it to create a balsamic glaze.

Have you ever tried balsamic glaze? You generally want to heat balsamic vinegar slowly to make a glaze. If you’re simply cooking with it, you shouldn’t worry about losing any flavor.

As I stated above, balsamic vinegar holds many flavors and should be used in small amounts. It’s perfect for marinating chicken, salad dressing, marinating steak, and so much more.

You might not have known, but balsamic vinegar is used in a lot of foods. Some barbeque sauce uses it, and funny enough, it pairs well is mozzarella cheese.

Remember that glaze I talked about?

Well, that pairs perfectly with ice cream! Balsamic vinegar is a treasure from Italia and should never be overused but simply used in the right moderations. I have a recent article that goes over whether or not balsamic vinegar is keto-friendly.

Are you a fan of balsamic vinegar? https://t.co/p8dYytnill #Cooking #balsamic #italianfood pic.twitter.com/KvFV5IpkDY

Can you boil balsamic vinegar?

Boiling balsamic vinegar is just fine. But it should be monitored while being boiled. It should also be gently simmered after reaching a boil rather than being left at a full rolling boil.

So the answer to this is a little complicated. For the most part, yes, you can boil vinegar.

Acetic acid is capable of killing pathogens, but that is only through direct contact and not through the air. This is why vinegar can get rid of staphylococcus aureus, which can cause a range of illnesses. The illnesses can be minor and straightforward, like skin problems all the way to life-threatening diseases.

Now while acetic acid in concentrated amounts can be toxic to humans, it can also kill pathogens. Like I mentioned before, though, this would not be achievable through boiling vinegar.

Acetic acid needs direct contact, which can not be achieved through the air, mainly because the flu is not in the air.

The flu is spread through surface contact, which can only infect someone when they touch their face. So, for instance, you shake hands with someone who has the flu and then touch your face. It’s all direct contact.

Apple cider vinegar is not flammable and won’t catch on fire. This is because it is made up of 5% acetic acid and 95% water. Most vinegar types are not flammable, but its main ingredient, acetic acid, is flammable when exposed to temperatures above 102 degrees Fahrenheit.

There are products you shouldn’t mix with vinegar because they can make a combustible substance.

You might think that mixing the two would make a super-powered cleaning product, but combining them is strictly advised against. Mixing these two cleaning products will cause chlorine gas. This may not be flammable itself, but it can cause breathing problems, burning, and much more.

Mixing vinegar with baking soda is definitely a no. If you store these two products together in the same container, it can explode.

We talked about being able to boil and heat vinegar alongside whether or not you can flambé vinegar.

Remember, vinegar in any form isn’t flammable. The only ingredient in vinegar that is flammable on its own is acetic acid. Vinegar is too diluted to be flammable, though.

An extra tip for everyone is not to use too much balsamic vinegar. It’s meant for small amounts that bring out massive flavors.