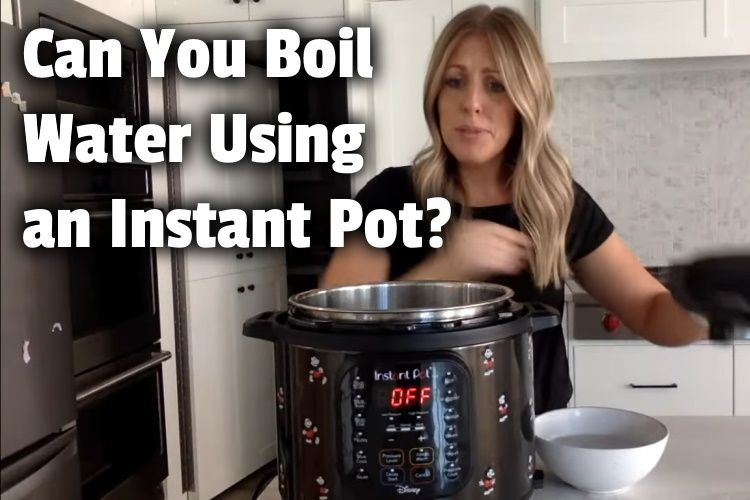 An electric pressure cooker like the Instant Pot is really useful and is great for cooking food super quickly. And stuff like dried beans or pulled pork, which used to take hours, can be done in under 1 hour.

But I’ve honestly never thought of using one to boil water!

So in this article, we’ll explore both how to boil water in an Instant Pot, whether it’s faster than just using a regular pot on the stove, and WHY you might want to do that.

But we’ll also cover which program to use to boil water, and how long to set the timer to.

Let’s get into it!

How to boil water in an Instant Pot

Here are the steps to boil water in an Instant Pot:

All of that being said, for a small amount of water, you can actually leave the lid off and just use the sauté function. More on this below.

For any of my Texas friends still needing to boil water just wanted to throw it out there than you can very quickly boil water in an instant pot. I’ve done it before when all burners on my stove were in use. pic.twitter.com/sR0NFPuKxF

What program should I use to boil water in an Instant Pot?

Instant Pots, especially the fancier more expensive ones, come with a ton of different program options. Those can include, depending on your model:

Other functions that are less used include:

How long does it take to boil water in an Instant Pot?

It takes 4-8 minutes on average to bring water to a rolling boil in an Instant Pot. Large amounts of water cooked using pressure will take 5 minutes, whereas it will take a little longer using the sauté function. The sauté function works best when boiling 1-2 cups of water.

So ultimately, it depends on how much water you need.

As I’ve covered above, the pressure cooking method works better when you need to boil anywhere from 2-10 or more cups of hot water. That requires the lid being on and waiting for the Instant Pot to reach full pressure before the 5-minute timer starts to count down.

But with the lid off, the sauté function works great for small amounts of water, say for maybe a bowl of oatmeal. And because you’re just boiling water, there’s virtually no clean-up!

Can you boil water in an Instant Pot without a lid?

Yes. You can boil 1-2 cups of water in an Instant Pot using the sauté function with the lid off. Larger amounts of water will boil faster using the lid on and utilizing the pressure cooking function.

But with the lid off, the sauté function works great for small amounts of water. And it will take about 3 minutes to boil water this way. And obviously, this will not use high pressure.

But how does that compare to other methods of boiling water?

Of course, atmospheric pressure and sea level do affect the boiling point of water and how long it will take to get there.

After all, in many places like Colorado, when you’re at or above 8000 feet above sea level, water’s boiling point drops to 198 °F rather than the normal 212 °F where I live in Texas.

So the boiling process can vary depending on where you live.

Can you boil water in an Instant Pot on sauté?

The saute mode on an Instant Pot will work to boil 1-2 cups of water. It can take between 4 and 8 minutes depending on the desired amount of water.

Boiling water feels like one of the most basic things you can do in the kitchen, but if you have an Instant Pot sitting around, it’s probably not something you do all that often.

Having an Instant Pot pressure cooker inside your kitchen can help you cook a variety of food and help you as a substitute for many appliances such as a rice cooker or slow cooker.

They are multi-functional and come with a variety of preset pressure settings that allows you to cook food conveniently.

You can use an Instant Pot for boiling water by just knowing a little bit about them.

Follow the steps to do it right. In this article today we explored how to use an instant pot for boiling water and the steps to follow.

Still video frame is taken from video – DO THIS FIRST! How to Use and Instant Pot – Instant Pot 101 by Six Sisters’ Stuff is licensed under CC2.0 and was cropped and had a text overlay added.

Continue Reading
link to Are Instant Pots Worth It? Ultimate Buyer's Guide!

Instant Pots seem to be everywhere lately. Even people who had no idea what a pressure cooker was before, now sing their praises.  But for those who haven't tried one, the first question is always...